Voters Are OK With Trump Taking Some Time Off

Trump departs the White House on Aug. 4 for a 17-day vacation in Bedminster, N.J. (Mark Wilson/Getty Images)
By Eli Yokley

President Donald Trump insists his 17-day absence from Washington is not a vacation, but most Americans would be OK with his taking at least two weeks off.

Trump has defended his stay at a residence in Bedminster, N.J., saying in an Aug. 5 post on Twitter: “This is not a vacation – meetings and calls!”

Working in Bedminster, N.J., as long planned construction is being done at the White House. This is not a vacation – meetings and calls!

At least in that sense, Trump is not unlike many Americans. A survey earlier this year by Glassdoor found that two in three Americans (66 percent) reported working while they were on vacation. The same survey found the average American reported taking about half of their eligible vacation time.

“It’s a dumb partisan game that gets played every year, and most people realize that when you are the president, the job follows you wherever you go,” Jennings said in an email on Tuesday. 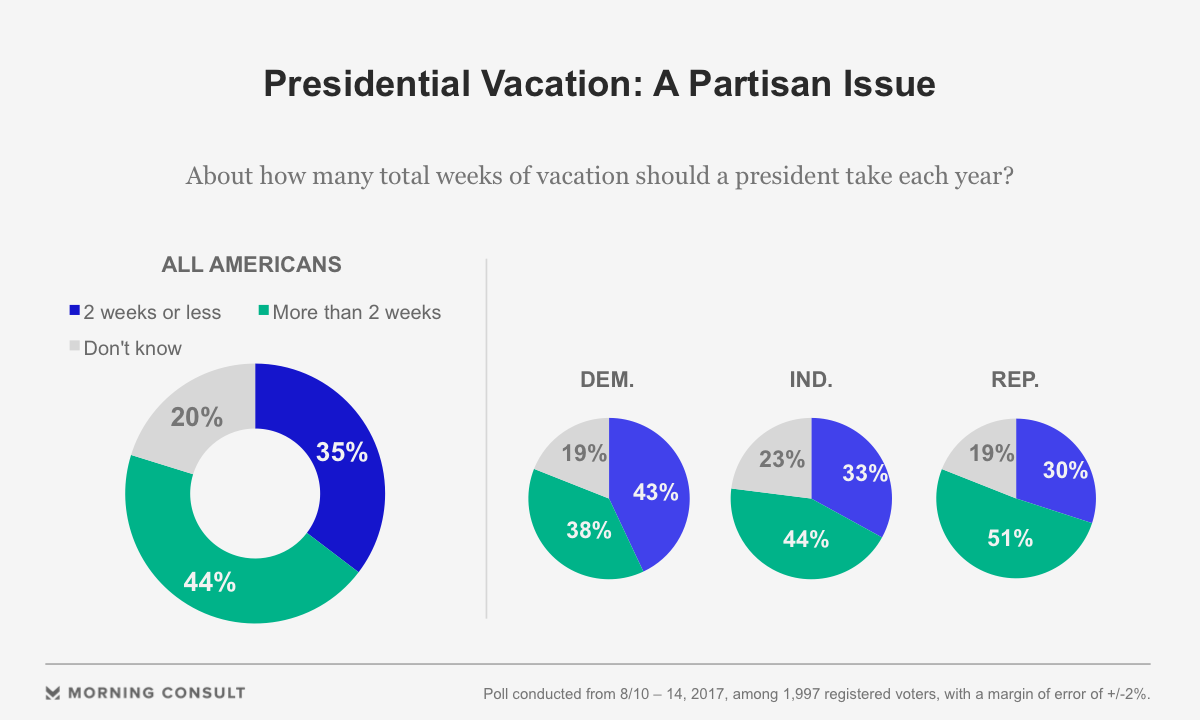 Voters were split, 39 percent to 42 percent, when asked if they thought Trump was working or not. Answers to this question mostly fell along party lines: 68 percent of Democrats said the president was not working on his vacation, while 67 percent of Republicans said he was.

When it comes to views of Trump’s golf habit, voters are split pretty evenly. About a third of Americans (34 percent) said Trump golfs too much, 33 percent said he does not golf too much and the same amount expressed no opinion, according to a Morning Consult/POLITICO poll conducted in June. That generally accords with views of Obama’s own golfing: 31 percent said he golfed too frequently, while 38 percent said he did not.

Tommy Vietor, a former spokesman for Obama and now a partner at Fenway Strategies, said Trump’s trips – including his visits to Trump-branded golf courses – are a bit different from Obama’s time off.

“For some reason, Republicans, and a bit too often for my liking, the press, acted like Obama was the first one who ever played golf,” he said in an email on Tuesday. “The coverage was stupid. But I’d argue that the issue with Trump is a little deeper. In addition to easy-to-find and laughably hypocritical attacks on Obama, he’s promoting his properties and using government resources to make money. I suspect voters wouldn’t love that.”

At the end of the day, no matter where the leaders of the United States spend their time, most voters (72 percent) would agree that presidents are never really on vacation.