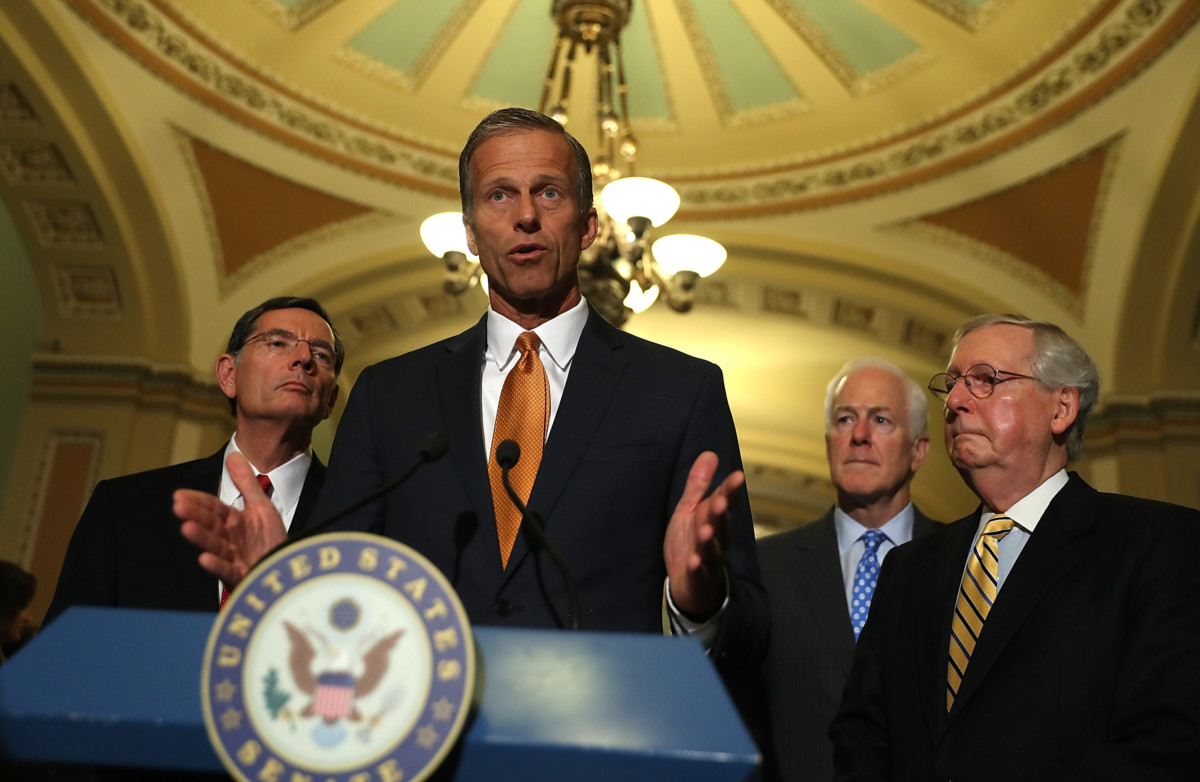 Sen. John Thune (R-S.D.) speaks to reporters during a news conference on Capitol Hill following a procedural vote on the GOP health care bill on July 25, 2017 in Washington, D.C. (Justin Sullivan/Getty Images)
By

A Republican effort to reauthorize the Federal Communications Commission for the first time in 27 years has net neutrality advocates nervous as they worry that stronger congressional control over the agency would hamper its oversight of internet providers.

In proposing a discussion draft at a hearing last month on the reauthorization of the agency, Rep. Marsha Blackburn (R-Tenn.), the chair of the House Energy and Commerce Subcommittee on Communications and Technology, said it was necessary “to restore a culture of humility that was lacking” at the commission under its previous leadership.

There have been efforts to reauthorize the agency since 1990, including one last year, but none have passed. Now, the reauthorization of the FCC is “at the top of the list” after lawmakers return from the August recess, Senate Commerce Committee Chairman John Thune (R-S.D.) told reporters at the start of this month.

The most recent move to reauthorize the FCC has net neutrality supporters suspicious. Gigi Sohn, who was counselor to then-FCC Chairman Tom Wheeler, said the draft bill appears to be punishing the FCC for implementing the 2015 Open Internet Order. That order enshrined net neutrality principles that forbid internet service providers from blocking, throttling or giving paid prioritization to content providers when transporting their data.

Central to the net neutrality debate is the order’s reclassification of broadband from an “information service” under the Telecommunication Act of 1996 to a “common carrier” under title II of the Communication Act of 1934 — a change that gives the FCC a lot more leeway to regulate internet providers.

The issue has been in and out of federal court for more than a decade and ping-ponging between approaches to regulation with every change in political administration. Now, with Republicans in control of Congress and the White House, those who want a lighter touch at the agency see an opening to drastically reduce the role of the FCC.

At the time of the FCC’s enactment by the Communications Act of 1934, it was common practice for Congress to grant permanent authorization for funding agencies, according to Allen Schick, a professor at the University of Maryland’s School of Public Policy who specializes in federal budgeting. Over time, he said, Congress shifted from using permanent authorizations to making them temporary – usually for a few years at a time – as a way to exercise their check on executive power.

More often than not, though, Congress would still fund agencies after their authorizations had expired. The Federal Election Commission, for example, hasn’t been reauthorized since 1981 but continues to be funded.

“Where there is significant controversy over the agency — in the case of FCC it may be net neutrality, and some of these other regulations — Congress tries to use reauthorization as leverage to change the agency, to change its behavior,  its actions, etc.,” Schick said by phone Thursday. “So that might be a play with the FCC.”

A prominent feature of Blackburn’s draft of the reauthorization is the requirement that a cost-benefit analysis be conducted in conjunction with the undertaking or issuance of any order. Such an analysis, as described in the draft, calls for the agency to outline where there has been a failure of public institutions when it considers a new rule.

This idea is not new. A trio of economists called for Congress to enact just such a requirement after a June 2016 ruling by the U.S. District Court for the District of Columbia that upheld the 2015 Open Internet Order.

“Given the D.C. Circuit’s willingness to defer to the FCC’s expertise in policy, and given the FCC’s willingness to eschew econometric evidence and economic theory as it considers new regulations, the most direct way to reinject economics into FCC policymaking is via a Congressional mandate,” wrote Gerald Faulhaber, a University of Pennsylvania business and economics professor, along with Hal Singer and Augustus H. Urschel of Economists Incorporated, this year in the International Journal of Communication.

Their complaint, they said, was more about the policymaking process than the result. “There is no reason why the Department of Labor, the Environmental Protection Agency, the Consumer Financial Protection Bureau and a host of other agencies should be required to perform cost-benefit analysis, while the FCC is free to embrace populism as its guiding principle,” they wrote.

But Sohn, currently a fellow at the Institute for Technology Law & Policy at Georgetown University, said that the draft bill is not about process, pointing to provisions that she said would impose a number of new deadlines and requirements for issuing rules.

“This is trying to make it so burdensome that the FCC can’t make policy,” she said in a phone interview Monday. “They want to handcuff the agency.”

Sohn said she saw the cost-benefit analysis as a way to effectively hand over enforcement of net neutrality principles to the Federal Trade Commission, which has weaker regulatory power than the FCC. Congressional Republicans have already started moving oversight duties from the FCC to the FTC. Earlier this year, Congress repealed the FCC’s broadband privacy rules.

Sohn particularly criticized the draft bill’s requirement to show a failure of a public institution. “This is just saying, ‘Oh, the FTC can do it; why do we need the FCC to manage these rules?’” Sohn said.

The draft bill’s requirements also don’t really make sense for a policy like net neutrality that has so many gray areas, said Coleman Bazelon, principal at the Brattle Group, a consulting firm on economics and regulations.

“Because there is so much disagreement between stakeholders on how it will be used, and even whether the potential results should be considered costs or benefits, the Open Internet Order under Title II authority is about a bigger policy question that really doesn’t lend itself well to a cost-benefit analysis,” he said by phone Monday.

Correction: A previous version of this story misstated the publication date of an article in the International Journal of Communication.