Republican and Democratic voters agree that members of Congress should find ways to achieve their policy goals without shutting down the government – until it comes to funding President Donald Trump’s proposed wall along the U.S.-Mexico border.

According to a new Morning Consult/POLITICO poll, 51 percent of Republicans said they support shutting down the government to force Congress to fund the proposed border wall.

Despite his campaign promise that Mexico would pay for the wall, Trump has called on Congress to front the bill in must-pass government legislation to keep the government open next month. During an Aug. 22 appearance in Phoenix, Ariz., he said, “If we have to close down our government, we’re building that wall.”

“People’s opinions are often inconsistent when they’re asked to consider abstract ideas versus specific policies,” Jennifer Lawless, a professor of government at American University, noted in a Tuesday email. She said large majorities of people say the U.S. Constitution should never be amended, despite supporting specific amendments, such as the Equal Rights Amendment, school prayer or a balanced budget amendment. And, she said, there is the Trump factor — even when he isn’t explicitly mentioned.

“Including the mention of the wall cues people to think of Trump and, thus, encourages them to consider the question along partisan lines. That’s why Republican support for the shutdown skyrockets,” she said. 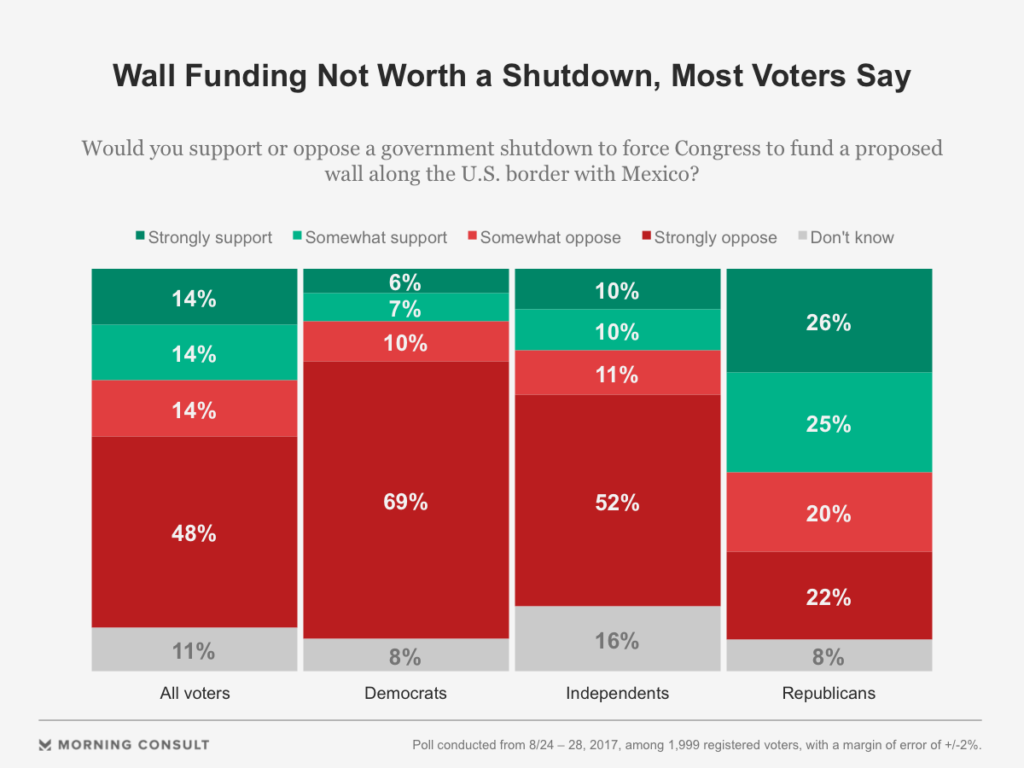 Overall, 62 percent of voters said they would oppose shutting down the government in order to force Congress to fund a proposed wall along the American border with Mexico, while 28 percent of voters support the move. Speaking with reporters in July, House Minority Whip Steny Hoyer (D-Md.) said Republicans have not passed government funding bills without his party’s help “for seven years,” suggesting they will need Democratic votes this time around. Of the wall, he said, “we’re not for it.”

A senior House Republican aide said Tuesday that Republican lawmakers are not opposed to funding the wall, but many are unwilling to shut down the government over it. The fear among the conference is the longer Republicans go without a plan, the more likely it is that Hoyer will be right and that Republicans will have to work with Democrats in the House and give in on some of their priorities.

Michael Steel, who served as press secretary for then-House Speaker John Boehner (R-Ohio), said in an email Tuesday he thinks the final bill to fund the government will include “funding for effective border security.”

Views have hardly changed since the Morning Consult/POLITICO poll conducted in April ahead of the last government funding debate. At the time, 27 percent of voters thought funding a border wall was important enough to shut down the government and 61 percent said it was not an important enough reason.

What’s different this time is that along with the government spending debate, Congress also has a debt ceiling hike on its plate when lawmakers return from recess next week. Seventy-eight percent of voters in the most recent poll said they were concerned about Congress’s ability to reach agreement on how to handle the debt limit, while 13 percent said they were not concerned or not too concerned.

Senate Majority Leader Mitch McConnell (R-Ky.), who earned the Twitter ire of Trump over comments he made criticizing “excessive expectations” on policy goals, said in an Aug. 23 statement that he is “committed to advancing our shared agenda together” with Trump, including preventing a government default and funding “the government so we can advance our priorities in the short and long terms.”

Steel, who now serves as managing director of the communications firm Hamilton Place Strategies, said the federal government’s response to Hurricane Harvey — since downgraded to a tropical storm — might be a new factor in the spending debate.

“If hurricane relief is part of a spending bill, it would probably be easier to pass, purely from a vote-counting point of view,” he noted.

The online survey of 1,999 registered voters was conducted Aug. 24-28 and has a margin of error of plus or minus 2 percentage points.

Clarification: A previous version of this story misquoted Ryan.