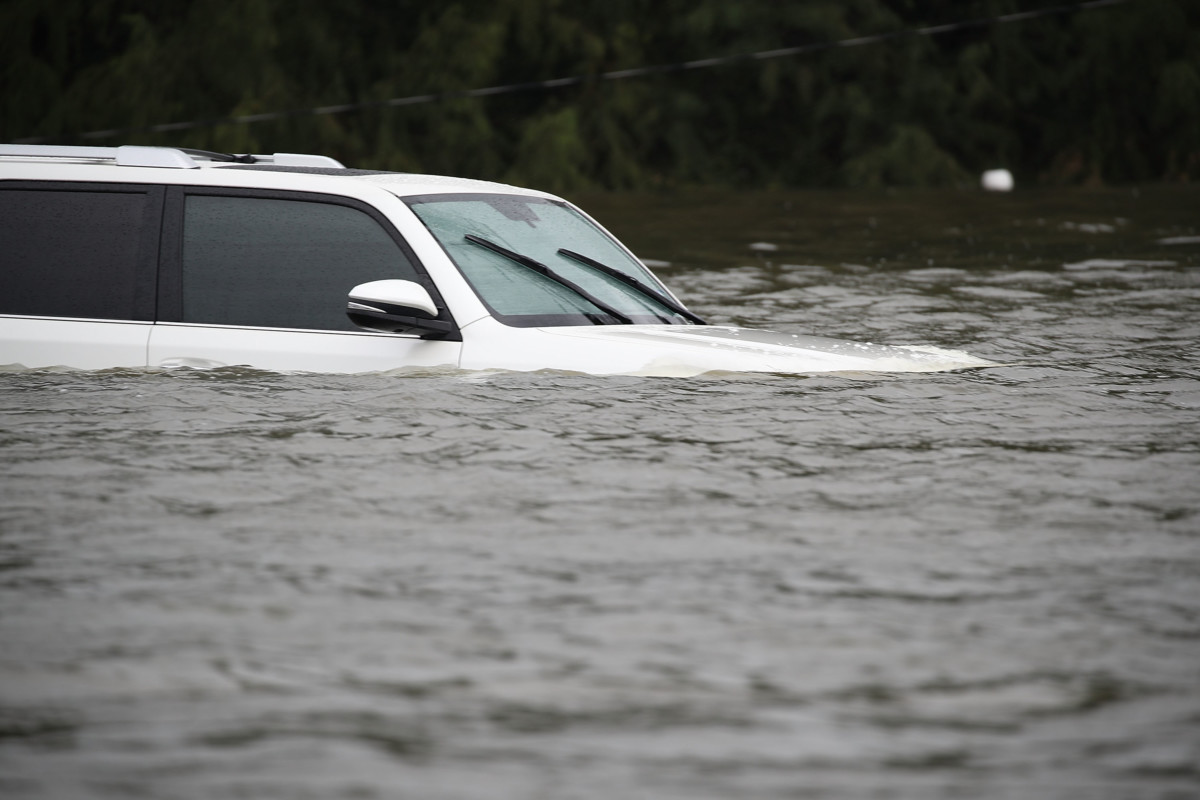 An SUV is seen submerged on the street after the area was inundated with flooding from Hurricane Harvey on August 29, 2017 in Friendswood, Texas. (Joe Raedle/Getty Images)
By Anna Gronewold

With swaths of Houston underwater, the faltering federal flood insurance program is likely headed for another short-term extension — a step lawmakers took 17 times between 2008 and 2012 before agreeing on a five-year reauthorization.

Extending the National Flood Insurance Program this time around, past its Sept. 30 expiration, was already shaping up to be a heavy legislative lift on Capitol Hill before the devastation of hurricane-turned-tropical storm Harvey. The program provides more than 5 million policies nationwide and has borrowed almost $25 billion from the U.S. Treasury.

House legislation that would reboot the NFIP is opposed by a group of Republicans from Gulf Coast states who say amendments to the reauthorization measure would cause rates to unfairly skyrocket for property owners by restricting “grandfathering,” a method that allows some homeowners to continue paying lower premiums even when flood maps change.

With 12 scheduled legislative days remaining before the program expires, coupled with pushback from influential legislators like House Majority Whip Rep. Steve Scalise (R-La.), lawmakers and legislative staff are skeptical that the House will be able to pass anything beyond a one- or two-month reauthorization.

“The fact remains that the bill can’t pass the House as it stands now, so additional changes will need to be made to address the grandfathering issue,” a House GOP leadership aide said Tuesday. “Hurricane Harvey is going to bring the importance of the program more to the forefront with the Texas delegation.”

While the NFIP offers flood maps, mitigation assistance and subsidized insurance to communities to incentivize rebuilding at higher standards and in safer areas, the 1968 program wasn’t designed to deal with cataclysmic losses like those stemming from Hurricane Katrina in 2005, the East Coast’s Superstorm Sandy in 2012 and last year’s flooding in Baton Rouge, La.

Top GOP members of the House Financial Services Committee have called for a five-year NFIP renewal that would focus on boosting the program’s financials and facilitating a transition to private plans. Committee Chairman Jeb Hensarling (R-Texas) defended the contested legislation approved by his panel, and he blamed the NFIP’s dominance of the flood insurance market for future debt that’s likely when the full extent of Harvey’s damage is known.

“That’s what happens when there is basically just one insurance provider for all of the flood risk in the whole country, which is exactly the system the government has built for itself with its NFIP,” he said in a Wednesday statement provided to Morning Consult. “Taxpayers and policy holders deserve better. That’s why the House Financial Services Committee has produced reform legislation that will make the flood insurance program stable, sustainable and affordable.”

The committee-approved measure would prohibit grandfathering for properties with two or more claims, a move that would allow the program to raise rates for many property owners when the Federal Emergency Management Agency alters flood maps. The agency submits a monthly report to Congress regarding any plans to revise flood maps.

“It’s never politically popular to increase someone’s premiums, but by the same token that debt shouldn’t be falling on taxpayers,” Steve Ellis, vice president of Taxpayers for Common Sense, said in an Aug. 25 phone interview.

Gulf Coast-area Republicans, especially members of the Louisiana delegation, who oppose some provisions in the amended bill argue that without grandfathering, perpetually raising rates on properties could cripple housing markets and cause people to forgo flood insurance altogether, which in turn would lower revenue to the NFIP.

Rep. Clay Higgins (R), a first-term lawmaker from Louisiana, introduced legislation in July that would reauthorize the NFIP for six years and focus on mitigation techniques designed to provide better returns on investment. It also would cap annual premium increases at 10 percent. The legislation approved by the House Financial Services Committee bill would cap those increases at 15 percent.

Higgins said the coastal delegation is negotiating with committee staff in an effort to craft a manager’s amendment to the panel-approved bill to ensure that the legislation is as “comprehensive as our own in protecting Louisiana and some of the unique challenges that take place.”

“I don’t know if there’s another state in the world more adept at dealing with inclement weather,” Higgins said of his home state in phone interview Friday.

But Higgins, whose coastal district is near the Texas border, acknowledged that the NFIP expiration date might arrive before an agreement is reached. In that case it would be “prudent” to pass a short-term extension, he said.

An alternative approach would be for the Senate to take the lead in overhauling the NFIP. Sen. Robert Menendez (D-N.J.) in June introduced a measure that has bipartisan support among its nine co-sponsors, who include Louisiana Republicans John Kennedy and Bill Cassidy, Sen. Marco Rubio (R-Fla.) and Sen. Elizabeth Warren (D-Mass.).

The Senate has not advanced any NFIP legislation through committee.

Kennedy said Tuesday he doesn’t know if there’s time for both chambers to pass anything more than a short-term extension. But he added that he’s “sure as hell going to try.”

“We’ve got enough people out there scared to death, and at least having a stable NFIP might make them feel a little better,” Kennedy said in a phone call with reporters.

The optics aren’t great for a divided Republican party, Kennedy said, adding that flood insurance should not be divisive.

“If we can’t do it together, then those of us in the majority, the Republican party, everyone needs to grow some oranges to get the job done,” he said. “We can’t be like some were during the health care debate like the lion in ‘The Wizard of Oz’ running around looking for courage. We don’t have time to look for courage.”