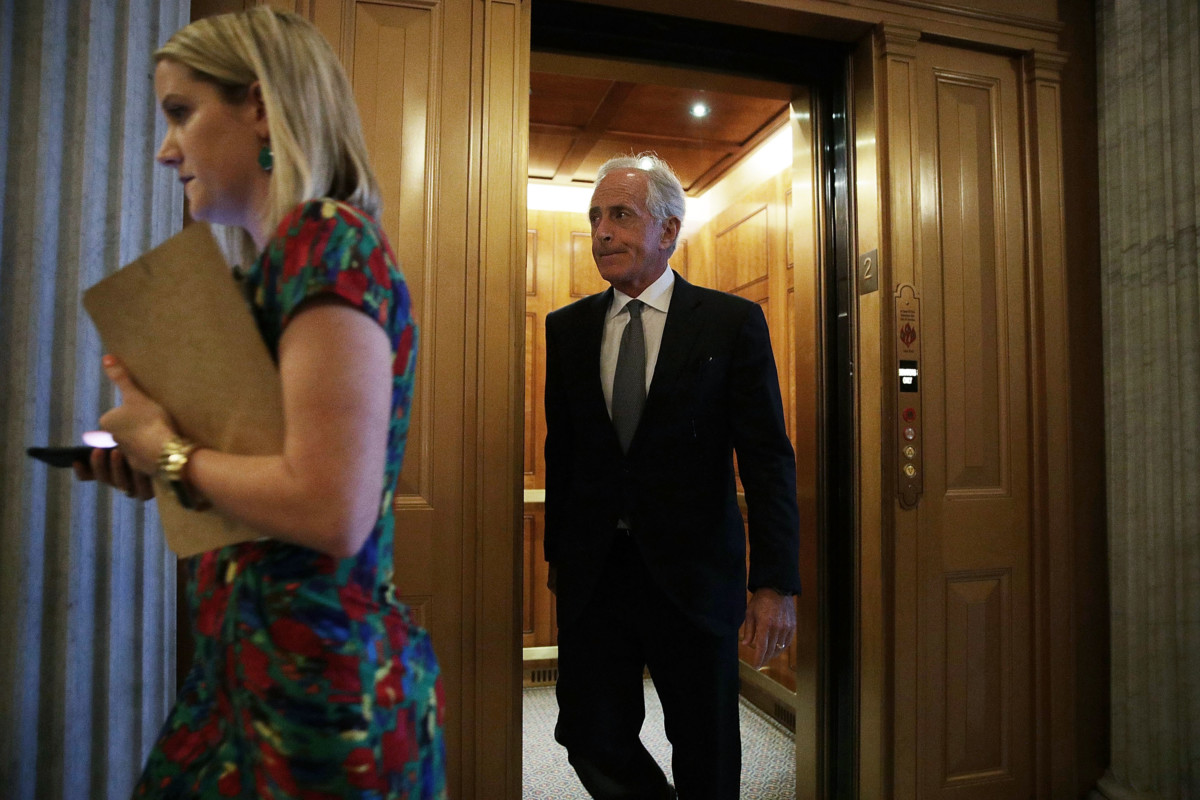 Sen. Bob Corker (R-Tenn.) is involved in the efforts to pass tax reform via reconciliation. (Photo by Alex Wong/Getty Images)
By Ryan Rainey

Republican lawmakers are working on a budget plan that would pave the way for the Senate to approve a tax overhaul package with a simple majority, but any deficit-financed tax cuts could end up triggering spending cuts to major federal programs that would be difficult to undo without bringing Democrats on board.

The 2010 Statutory Pay-As-You-Go (PAYGO) Act, which was passed by a Democratic Congress and signed into law by former President Barack Obama, requires the federal government to, at the end of each congressional session (typically the end of the calendar year), tally the revenue effects of bills that have become law. If the government is projected by the Office of Management and Budget to be adding to the deficit after five years and Congress does not pass a waiver, the president is then responsible for directing major automatic spending cuts within 14 days of adjournment — cuts which include slashing funds to Medicare by up to 4 percent. Social Security, major defense spending and interest payments on the federal debt are exempt.

The 2010 law’s spending cuts have never been triggered, but the rules matter for current GOP efforts: Senior Republican leaders have signaled that tax reform legislation doesn’t need to be strictly revenue-neutral in the short term. Instead, some Republicans suggest that any deficits caused by the tax cuts will be offset by the revenues generated through economic growth unleashed by tax reform.

Ed Lorenzen, a senior adviser at the Committee for a Responsible Federal Budget who was a budget adviser to then-House Majority Leader Steny Hoyer (D-Md.) from 2007 to 2010, said in an interview Wednesday that OMB’s PAYGO scorecard would be likely to show major revenue losses at the end of this year if GOP tax writers institute the $1.5 trillion in tax cuts that have been cited by publications such as The New York Times in stories about Republican tax plans.

Because the statutory rules are enshrined in law, both houses of Congress must pass legislation instructing the OMB not to include revenue losses like a tax cut in the scorecard if lawmakers want to avoid the automatic cuts. That’s where Republican lawmakers could run into a problem.

Lorenzen said Congress can’t impose the waiver through a reconciliation tax reform bill itself, which means Republicans would need 60 votes in the Senate to prevent the automatic spending cuts — and Democrats would have to decide whether to vote in favor of a waiver.

It could be a tough decision for some lawmakers: Democrats who vote for it could be seen as capitulating to Republican pressure, but rejecting the waiver would risk deep cuts to programs that are important to Democrats. A spokesman for Senate Minority Leader Chuck Schumer (D-N.Y.) did not immediately respond to a request for comment on the party’s stance on a PAYGO waiver.

On the flip side, the looming threat of across-the-board cuts could give the GOP impetus to make the tax overhaul package as revenue-neutral as possible to avoid forcing a difficult vote for centrist Republicans. Alan Cohen, a senior fellow at the Center for American Progress who authored a white paper in August on the PAYGO rules relative to tax reform, said in an interview Tuesday that the pay-as-you-go requirement itself is meant to “impose a penalty for having an unpaid-for tax cut.”

“In my mind, the notion would be that the sequester cuts would be something that Congress would say, ‘We can’t accept that,’ and therefore they cannot legislate an unpaid-for tax cut,” Cohen said.

However, Rohit Kumar, leader of the Washington National Tax Services Tax Policy Services group for accounting firm PwC, said in an interview Tuesday that a potential day of reckoning on PAYGO isn’t an immediate threat to tax reform efforts.

“The key element of statutory PAYGO is that it does not present an upfront — at the time of enactment — obstacle to a measure,” said Kumar, who was also previously a domestic policy staffer for now-Senate Majority Leader Mitch McConnell (R-Ky.). “To the extent that this is an issue, it will become an issue later.”

In addition to a standalone instruction to the OMB, Congress could attempt to reverse the statutory PAYGO rules by changing the underlying statute itself, said William Hoagland, a senior vice president at the Bipartisan Policy Center, who worked as a staff director for Senate Budget Committee Republicans from 1982 to 2003.

That change would require a vote under regular order. Hoagland said in a Wednesday interview that the numerous ways that the Senate could be forced to hold a vote under a 60-member threshold prove why reconciliation is such a tall task for tax reform.

“Why not just accept that and go ahead and do your tax reform outside of reconciliation or outside the budget process, and accept the fact that you’re going to have to work in a bipartisan manner?” Hoagland said.

For the moment, Republicans appear to be more concerned with the plan for budget reconciliation itself. Sen. Bob Corker (R-Tenn.), a member of the Senate Budget Committee who has been deeply engaged in efforts to pave the way for tax reform using reconciliation procedures, said Tuesday that there will be “some PAYGO language relative to the spending side.”

“But the thing that we’ve been focused on is: How much headroom do you give the Finance Committee as we develop this?” Corker told reporters at the Capitol.

He added that he wants the tax-writing Finance Committee to come up with legislation that can be called pro-growth, basing revenue projections on “rational assumptions.”

Democrats haven’t invoked PAYGO prominently in their public comments on tax reform, though party leaders have made it clear that they oppose any tax cuts that enlarge the deficit. Sen. Chris Van Hollen (D-Md.) on Tuesday told Morning Consult that Republicans previously tried to waive unpaid-for tax changes under a prior statutory PAYGO Act that expired at the end of the 2002 fiscal year.

A spokesman for the OMB said in an email Thursday that the office “cannot comment on how we’d score legislation that we have not yet seen” and that staffers “will work with Treasury and other affected agencies to determine the legislation’s cost impact.”