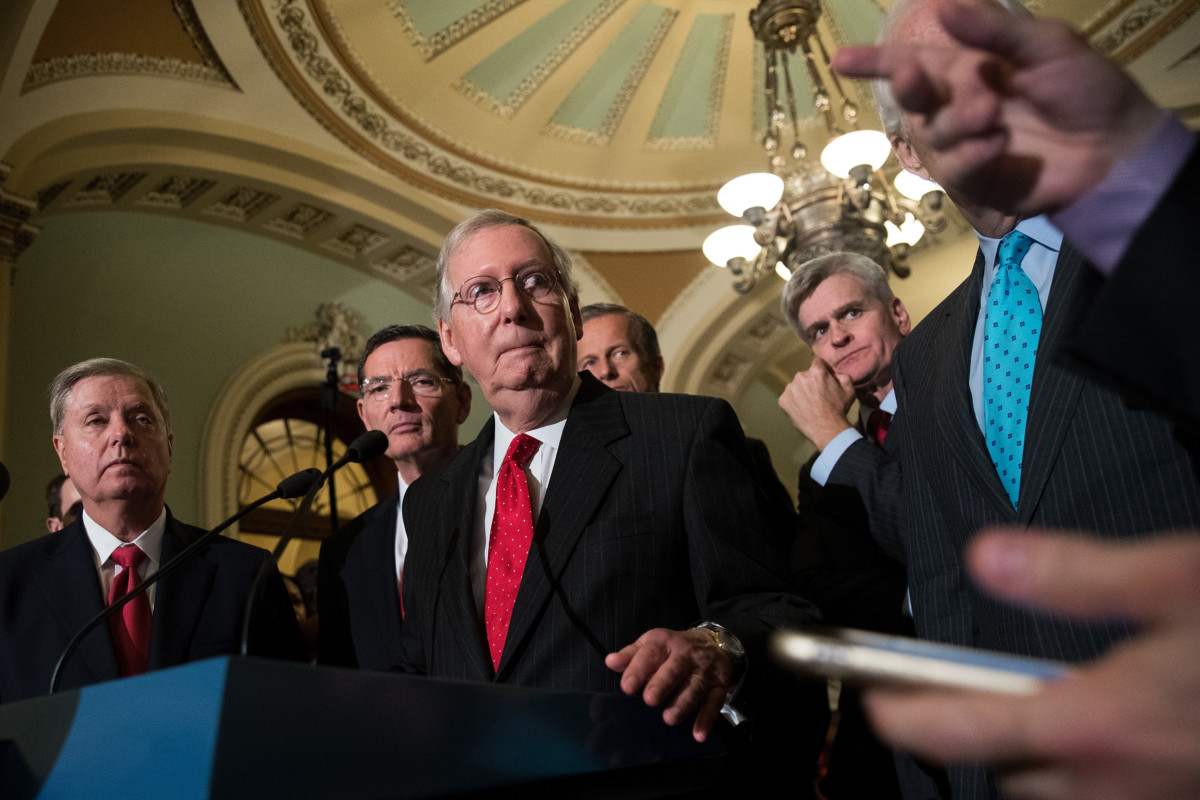 With the Senate abandoning its latest effort to repeal the Affordable Care Act, Republican congressional leaders and President Donald Trump ramped up their push for tax reform on Tuesday in advance of the release of a critical document outlining how the GOP wants to change the tax code.

“We do think it’s time to turn to our twin priority — reforming the tax code,” Sen. Mitch McConnell (R-Ky.) told reporters Tuesday. “We’ve reached significant agreements inside the Budget Committee to go forward, and I’m optimistic that we’ll achieve that.”

On Tuesday, Trump convened a meeting at the White House with a bipartisan group of members of the tax-writing House Ways and Means Committee to discuss the reform plans. After the meeting, which was also attended by Treasury Secretary Steven Mnuchin and National Economic Council Director Gary Cohn, Trump said he looks forward to working with members of Congress “to pass the reform and the massive tax cuts that our country desperately needs to thrive, to grow, to prosper.”

Tax writers have been encountering pressure from all sides of the tax reform debate that is likely to continue after they release the framework on Wednesday.

Rep. Mark Meadows (R-N.C.), chairman of the House Freedom Caucus, said his group expected to get together after the entire Republican conference meets on Wednesday to go through the leadership-backed tax proposal.

The members of the organized group of the House’s most conservative Republicans have no agreement on specific details of tax reform, Meadows said, but he did have a few “red lines.”

Trump asked for Democrats to jump on the caboose after the tax train has already left the station. I saw no Democrat ready to jump on board.

The current marginal corporate tax rate is 35 percent, and Republicans are expected to include a proposal for a 20 percent rate in the new details. The pass-through rate is intended for small businesses, although pass-through structures are common for large companies.

In August, Meadows said that he was hoping for “something with a one in front of it” for the corporate tax rate. Trump has been the most notable champion of a 15 percent rate, and he stood by that number in remarks to reporters on Sunday.

When asked if Trump continued to push for a 15 percent rate at Tuesday’s meeting, Ways and Means Committee Chairman Kevin Brady (R-Texas) told reporters that “we all continue to try to drive the rates as low as possible” and added that the plan that will be released Wednesday will show a “unified framework” on business rates.

The failure of attempts to repeal the Affordable Care Act in the Senate appears to have galvanized House conservatives to drive hard on changes to the tax code. Rep. Mark Walker (R-N.C.), the chairman of the conservative Republican Study Committee, said at a Capitol Hill press conference Tuesday that “the American people are neither impressed or satisfied by the lack of congressional accomplishment on the issues that drove them to the ballot box.”

Walker said one of the RSC’s three priorities for the next three months — along with legislation repealing the ACA, possibly on a piecemeal basis, and beefing up border security — will be to assist Brady’s efforts to pass tax reform.

He added that RSC members who normally toil behind the scenes on process-oriented issues will be more vocal on the issue since they “have no other alternative but to move in a more proactive manner.”

“The will of the conference has been altered, and even more importantly, the will of the American people has not been fulfilled,” Walker said.

It also remains to be seen whether Democrats will go along with the new bipartisan outreach. Rep. Mike Thompson (D-Calif.), a member of the conservative Blue Dog Coalition who sits on Ways and Means and attended the meeting with Trump, told reporters that the meeting was an “important step” toward bipartisan cooperation but not one that led to the resolution of any Democratic worries about the plan.

“Trump asked for Democrats to jump on the caboose after the tax train has already left the station,” Doggett said in a statement. “I saw no Democrat ready to jump on board.”