Administration's proposal is considered a compromise with congressional Republicans 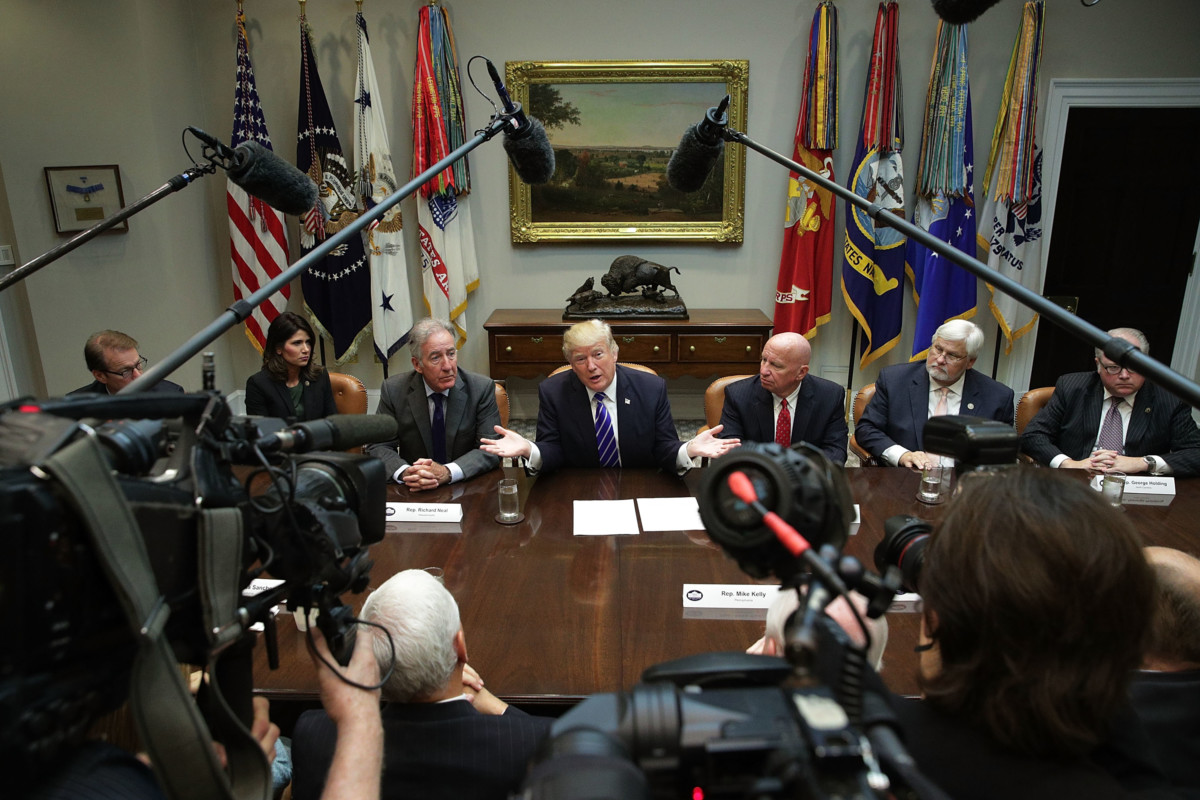 With the White House’s announcement of its long-anticipated tax overhaul plan, all eyes now turn to Congress as lawmakers begin negotiations over details of legislation that could represent trillions of dollars of changes to the tax system.

The proposal in the joint plan, which was released on Wednesday with GOP leaders from the House Ways and Means Committee and Senate Finance Committee, called for a 20 percent corporate tax rate, a substantial cut from the current rate of 35 percent.

The updated plan largely includes core demands made by Republicans, such as repealing the estate tax and eliminating most itemized deductions. The proposal also includes a few compromises around divisive issues where the White House, lawmakers and tax groups have clashed.

For example, the 20 percent corporate rate, which White House officials say is lower than the 22.5 percent global average for industrialized countries, is part of a general blueprint that will be crafted into legislation as it goes through the committee processes on Capitol Hill.

As recently as this past weekend, Trump said he hoped for a 15 percent rate, which he has argued is key for U.S. job creation. Many Republican lawmakers have said 15 percent is unrealistic, and they instead proposed numbers in the low- to mid-20s.

But in a speech in Indianapolis on Wednesday, Trump touted the proposed reduction as the lowest top marginal income tax rate for small and midsize businesses in more than 80 years. “This is a revolutionary change and the biggest winners will be the everyday American workers as jobs start pouring into our country and companies start competing for American workers and as wages start going up at levels that you haven’t seen for many years,” he said.

House Ways and Means Committee Chairman Kevin Brady (R-Texas) on Monday said the House and Senate will pass budget proposals ahead of the tax legislation to ensure Republicans can take advantage of the fast-track reconciliation process to pass a tax overhaul by the end of the year. That move would allow GOP lawmakers to pass legislation without Democratic support.

The conservative House Freedom Caucus, typically a foil to GOP leaders, also backed the plan Wednesday. The crucial endorsement clears the way for the House to pass a budget.

“The Freedom Caucus looks forward to sending a final bill based on this framework to President Trump’s desk as soon as possible,” the group said in a statement Wednesday.

The framework includes reducing the number of individual tax brackets from seven to three. Officials say those brackets will be 12 percent, 25 percent and 35 percent, but lawmakers will have the option to add a fourth bracket above the 35 percent rate for the wealthiest taxpayers.

The zero tax bracket would be $12,000 for individuals and $24,000 for married taxpayers. The plan also includes a yet-to-be specified expansion of the tax credit for families with children under the age of 17, and a $500 tax credit for non-child dependents.

This is a revolutionary change and the biggest winners will be the everyday American workers as jobs start pouring into our country and companies start competing for American workers and as wages start going up in levels you haven’t seen for many years.

The maximum tax rate for small businesses would be 25 percent, and a controversial provision for full and immediate expensing for businesses will be included in the proposal, specified for at least five years. Two rates will be created for profits abroad: one for cash and cash equivalents and a lower rate for illiquid assets.

White House officials did not say how much they are prepared to add to the federal deficit with the plan, which will be determined by House and Senate budget resolutions, but they noted the Trump administration’s position that economic growth set in motion by the tax cuts will offset initial costs.

Democrats bashed the framework and Republican pledges that the plan will be a boon to the middle class. Senate Minority Leader Chuck Schumer (D-N.Y.) said a structure that repeals the estate tax, lowers rates on pass-through entities and lowers the top individual rate is not geared toward middle-class Americans.

Schumer also criticized the dynamic scoring process that Republicans say will offset the cost of cuts with economic growth.

“Dynamic scoring is fake math,” Schumer said on the Senate floor Wednesday. “It’s just made up, fake math to hide another deficit-busting tax cut to benefit the wealthiest Republicans.”

The framework could cost up to $2.2 trillion, according to a preliminary estimate from the Committee for a Responsible Federal Budget on Wednesday.

“If this framework is all about the middle class, then Trump Tower is middle-class housing,” said Senate Finance Committee Ranking Member Ron Wyden (D-Ore.). “It violates Trump’s tax pledge that the rich would not gain at all under his plan by offering sweetheart deals for powerful CEOs, giveaways for campaign coffers and a new way to cheat taxes for Mar-a-Lago’s loyal members. This continued lack of detail for the middle class guarantees that average Americans will be the ones hit with shrinking paychecks and higher tax bills.”

Philip Ellender, president of government and public affairs for Koch Companies Public Sector, had pushed policymakers to remove what he called corporate welfare provisions from the code.

“Wherever possible, loopholes, deductions, exemptions and other handouts should disappear,” Ellender said in a statement. “We maintain that cutting rates is the most reliable pathway to growth. This is a once-in-a-generation opportunity to unrig what is increasingly a two-tiered society and to restore a free-market system that enables Americans to flourish.”

Correction: A previous version of this story misstated one of the individual tax brackets and the kind of overseas assets that would receive a lower tax rate.

This story has been updated to include a link to the tax-overhaul framework.