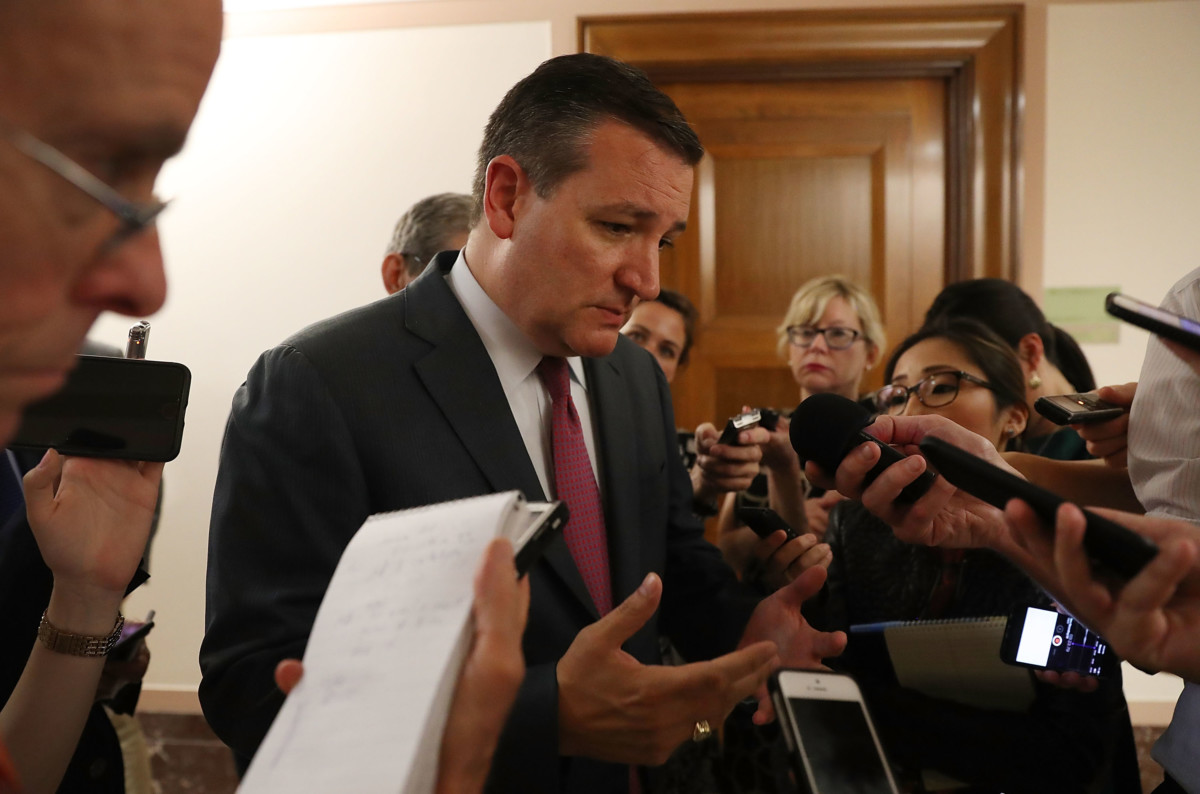 Sen. Ted Cruz is continuing his push to repeal elements of the 2010 Dodd-Frank Act through tax reform legislation, saying Thursday that he’s discussed the proposal with Senate leaders.

The Texas Republican told reporters at the Capitol that talks with leadership include what specific elements to include in the measure.

“We have discussed it, collectively, with a number of senators,” Cruz said.

Using a fast-track procedure known as budget reconciliation, GOP leaders are hoping to pass the tax reform bill through a simple-majority Senate vote, avoiding a Democratic filibuster. Cruz and Sen. Pat Toomey (R-Pa.) have been the most vocal champions of dismantling some of Dodd-Frank’s regulations through the reconciliation process.

I’m for doing as much as the market will bear, but the main thing I’m concerned about is tax reform.

Cruz doesn’t sit on either the Senate Banking Committee, which has jurisdiction over Dodd-Frank, or the tax-writing Senate Finance Committee. Toomey sits on both panels.

It’s not clear yet whether Senate leaders support Cruz’s proposal.

“I personally think we need to take care of business on tax reform and not get distracted by other items, as tempting as that might be,” Sen. John Cornyn of Texas, the second-ranking Republican in the Senate, said in response to a question about Dodd-Frank. “I’m for doing as much as the market will bear, but the main thing I’m concerned about is tax reform.”

One possible ally for Cruz is Senate Finance Committee Chairman Orrin Hatch (R-Utah), who told reporters Thursday that Dodd-Frank is “the worst doggone law I’ve seen — it may even be worse than Obamacare.”

When asked if Dodd-Frank changes could be included in the tax reform vehicle, Hatch responded: “I hope so.”

It’s possible to repeal some, but not all, of Dodd-Frank’s measures through the budget reconciliation process. In a December 2016 Senate floor speech, Toomey said that there’s precedent for rolling back regulations through reconciliation. By sending the Banking Committee reconciliation instructions, Toomey said at the time, lawmakers can alter the financial regulatory agencies’ funding streams that Dodd-Frank established.

Republicans have taken the position that Dodd-Frank has hamstrung lending and led to the erosion of small banks, although that assertion is disputed by Dodd-Frank supporters and some industry experts.  Democrats consider the law one of former President Barack Obama’s most important achievements and have defended its key pillars such as the Consumer Financial Protection Bureau.

Senate Banking Committee Chairman Mike Crapo (R-Idaho) said Thursday that he still wants to see specifics, and that he couldn’t say what mechanisms could be used to make changes to the CFPB or the orderly liquidation authority.

The House already has passed a standalone measure, known as the Financial CHOICE Act (H.R. 10), that would constitute an across-the-board overhaul of the financial regulatory regime and was sold to the public as a means of repealing Dodd-Frank. That bill was championed by House Financial Services Committee Chairman Jeb Hensarling (R-Texas) and supported by almost every House Republican.

“I don’t want to attach Dodd-Frank,” Walker told reporters Thursday. “This is straight-up no games on this one, so I hope that the Senate can deliver.”

Almost every House Democrat voted against the CHOICE Act, and Senate Democrats have mostly been united in their view that wholesale changes to the Dodd-Frank should be avoided.

Sen. Chris Van Hollen (D-Md.), a member of the Senate’s Banking and Budget committees, said Thursday that Democrats need to be on guard for changes to the law. And, he said, the effort could hurt Republicans as they try to court moderate Democrats to support the tax reform package.

“I think the more issues they try and pack into this reconciliation bill that are unrelated to tax reform, the more difficulty they’re going to have passing tax reform, because it just further complicates the situation,” Van Hollen told reporters. “The path they’re taking on tax reform is already bad enough right now.”