For the first time in at least 3 1/2 years, health care is tied with the economy as voters’ top issue, as news coverage of Republicans’ attempts to repeal the Affordable Care Act intensified in recent months.

Twenty-four percent of voters said health care is the No. 1 issue on their minds in casting votes for Senate or House elections, according to a new Morning Consult/POLITICO survey of 1,987 registered voters. In the Sept. 22-24 poll, the same percentage of voters said their top priority was the economy when determining votes for federal offices; that topic has been the No. 1 concern for a plurality of voters since Morning Consult started asking the question in March 2014.

At 22 percent, security, which typically ranks second after the economy, was the next most important issue among voters. The online poll has a margin of error of plus or minus 2 percentage points.

Voters’ interest in health care this month may be a result of widespread coverage of Senate Republicans’ latest attempt to unravel the ACA, which was subjected to stinging attacks from popular late-night host Jimmy Kimmel that reverberated on social media and on news channels. In the poll, 54 percent of voters said they’ve seen, read or heard at least some about Kimmel’s comments. 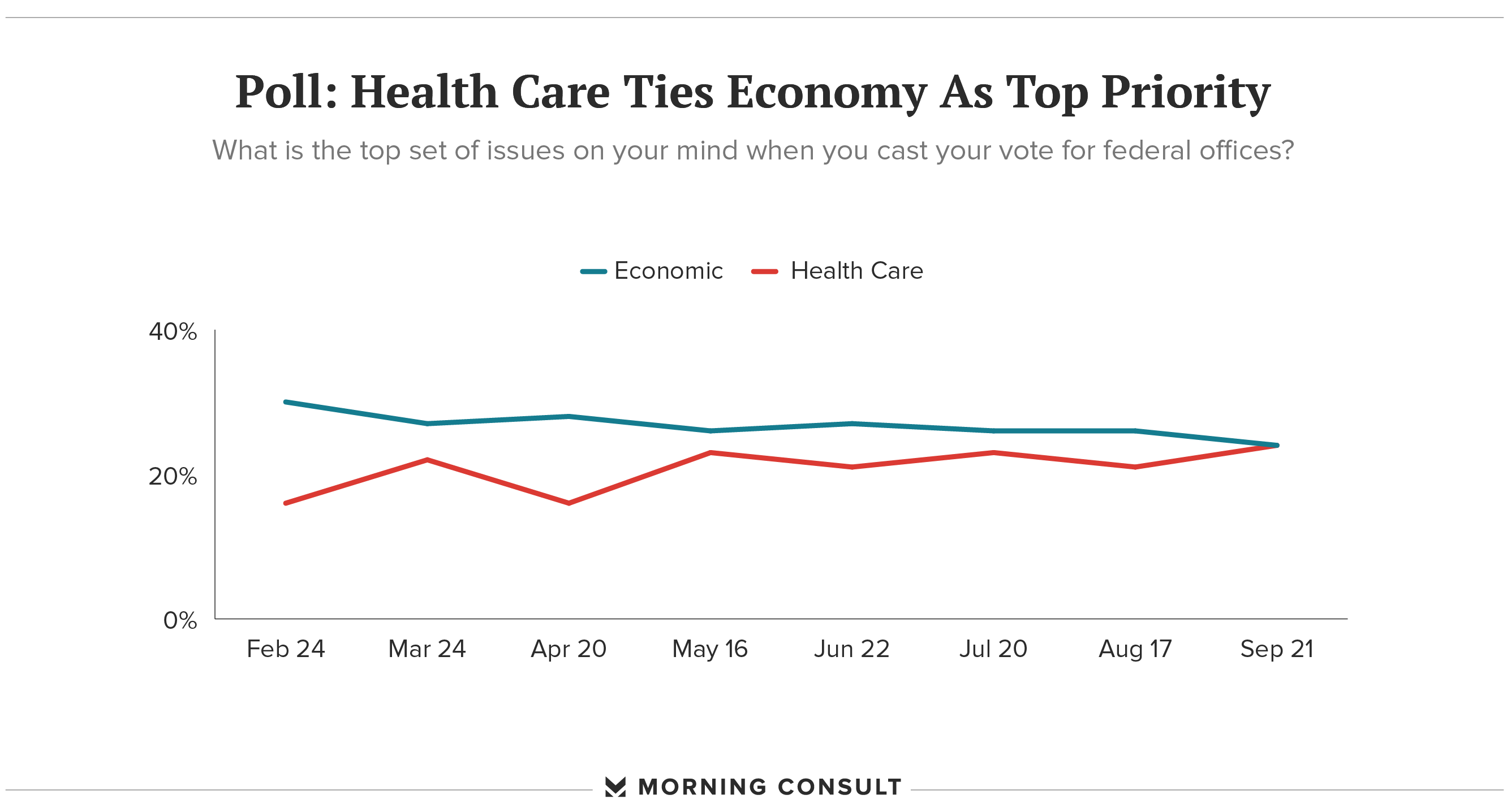 GOP leaders shelved the bill Tuesday as it became apparent the legislation lacked the votes to pass.

“That’s because of all the publicity we’ve seen, and it should be, of course — it’s one-sixth of the economy,” Sen. Ben Cardin (D-Md.) said Wednesday in a brief interview about the prioritization of health care. Cardin sits on the Senate Finance Committee, which has jurisdiction over some health care issues.

Some Republicans, meanwhile, appear to attribute voters’ focus on health care to their belief that Obamacare has failed and that many Americans are seeking a way out.

“Obamacare’s problems are widespread and well known,” GOP Sens. Bill Cassidy (La.), Lindsey Graham (S.C.), Dean Heller (Nev.) and Ron Johnson (Wis.), the lead sponsors of the latest Obamacare replacement plan, said Tuesday in a joint statement, noting that 45 percent of U.S. counties or parishes have one provider. “Premiums are skyrocketing. And families across the country are suffering under the weight of this failed law.”

But the survey shows health care’s prime importance among voters is a recent phenomenon. For instance, in a Morning Consult/POLITICO poll from May 12-14 — shortly after House Republicans passed their legislation to overhaul Obamacare on May 4 — the economy still beat out health care as voters’ top issue, 28 percent to 23 percent.

The tie on health care and the economy in September likely comes down to shifting health care priorities on Capitol Hill, Liz Hamel, director of the Kaiser Family Foundation’s Public Opinion and Survey Research team, said in a Wednesday interview.

When people say health care, they often are actually talking about the economic issue of health care.

Up until the end of July — when Sen. John McCain (R-Ariz.) cast a deciding vote that collapsed Senate Republicans’ first major Obamacare repeal effort — the singular focus on health care was a partisan fight over the ACA.

But by mid-September, health care priorities on Capitol Hill had diversified: Sen. Bernie Sanders (I-Vt.) rallied progressives behind his “Medicare for all” legislation. The Senate Health, Education, Labor and Pensions Committee launched a bipartisan push to prevent Obamacare premiums from skyrocketing next year. And the Senate considered the latest attempt to unravel the ACA, known as the Cassidy-Graham plan.

“It has to do with attention being brought to the issue from both sides of the political spectrum,” said Hamel, who added that consumers seeing rising out-of-pocket costs and drug prices also likely play a part.

Hamel also noted that some voters might consider their own personal health care costs to be an economic issue.

“When people say health care, they often are actually talking about the economic issue of health care,” she said. “There’s some overlap in those categories.”

Clarification: This story has been updated to note security’s place as an issue with registered voters casting votes for federal offices.