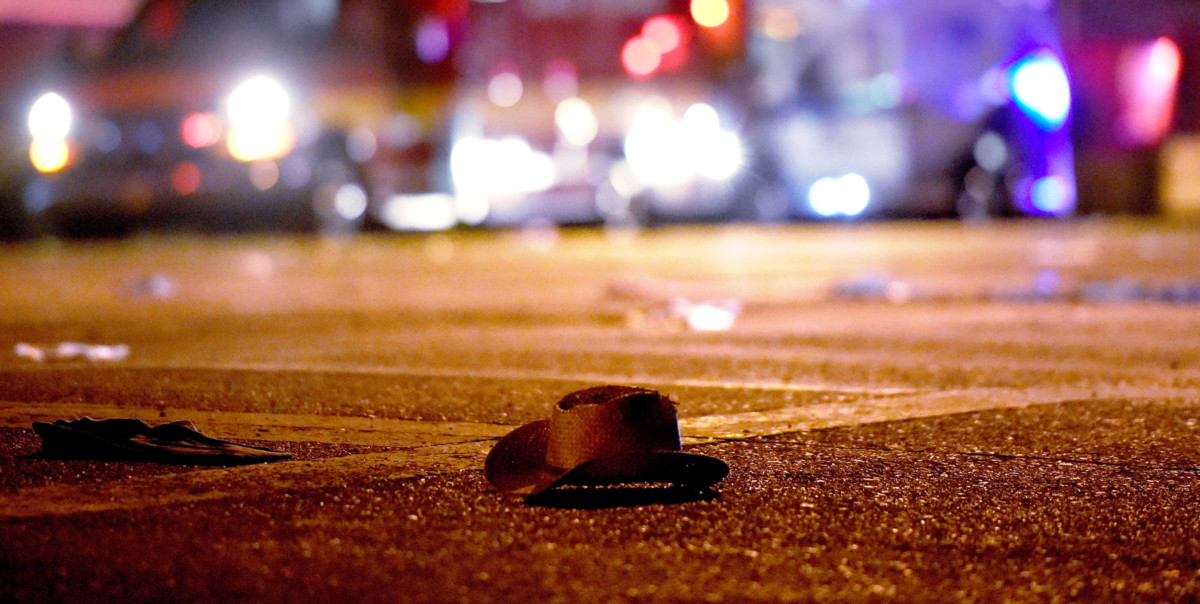 A cowboy hat lays in the street after shots were fired near a country music festival on October 1, 2017 in Las Vegas, Nevada (David Becker / Getty Images)
By Eli Yokley

Lawmakers called for stronger gun control measures on Monday after a gunman killed at least 59 people and injured more than 500 in Las Vegas, with Rep. Pete King (R-N.Y.) and Rep. Mike Thompson (D-Calif.) preparing to reintroduce legislation to require background checks on all commercial firearm sales, including at gun shows.

An aide to House Minority Leader Nancy Pelosi (D-Calif.) told Morning Consult that a return of the bill, which had been also introduced in 2013 and 2015, is “imminent” and that the two lawmakers are finalizing the bill’s text.

On Monday, Pelosi also penned a letter to House Speaker Paul Ryan (R-Wis.) asking him to create a select committee on gun violence and to pass the King-Thompson bill. A spokesperson for Ryan’s office did not respond to a request for comment.

The calls for stricter oversight over gun sales come as Morning Consult polling data in recent months has shown stronger public support for such measures, but that same data also reflects a growing pessimism among voters that Congress will pass such laws.

A Morning Consult/POLITICO survey in June, conducted in the days after House Majority Whip Steve Scalise (R-La.) was wounded in a shooting, showed that 61 percent of Americans said that they support stricter gun control laws.

Those figures represented a rise in the year since the Pulse Nightclub shooting in June 2016, after which 57 percent of voters told Morning Consult that they supported stronger gun control measures.

The nation's counting on you.

But the poll in June 2017 also showed that more Americans than not (45 percent) believed that the chances of stricter gun control laws passing Congress in the next year or so are “poor.” The lack of confidence was up 16 points since the survey last year.

Though congressional lawmakers who favor new gun control measures have found no success in recent years, advocates for these laws continued to press their case on Monday.

“The nation’s counting on you,” said former Rep. Gabrielle Giffords to her former colleagues in Congress, raising her fist while speaking at the Capitol on Monday afternoon.

Speaking earlier in the day, President Donald Trump called the shooting an “act of pure evil,” but did not mention anything about laws restricting gun sales and access.  Asked about the public policy debate over gun control, White House Press Secretary Sarah Huckabee Sanders told reporters Monday, “The president’s been clear that he’s a strong supporter of the Second Amendment, and I don’t have anything further at this point.”

Joseph Lombardo, sheriff of the Las Vegas Metropolitan Police Department, said Monday afternoon at a news conference that the body of the gunman in the Las Vegas attack, identified by police as Stephen Craig Paddock, was found with at least 16 firearms in his hotel room, as well as 18 at his home, but details about the kinds of weapons are not yet known.

The Bureau of Alcohol, Tobacco, Firearms and Explosives said it is testing the weapons that were found.

Despite opposition from many Republicans on Capitol Hill, Congress has tried to change gun laws in recent years.

In 2013, a bipartisan plan backed by Sen. Joe Manchin (D-W.Va.) and Sen. Pat Toomey (R-Pa.) to require background checks for all commercial gun sales failed when it was brought up for a Senate vote.

The pair unsuccessfully sought to revive their legislation in 2015 after shootings at a church in Charleston, S.C., and a community center in San Bernardino, Calif., but were unsuccessful.