With GOP in majority this time, William Wehrum's chances likely to have improved 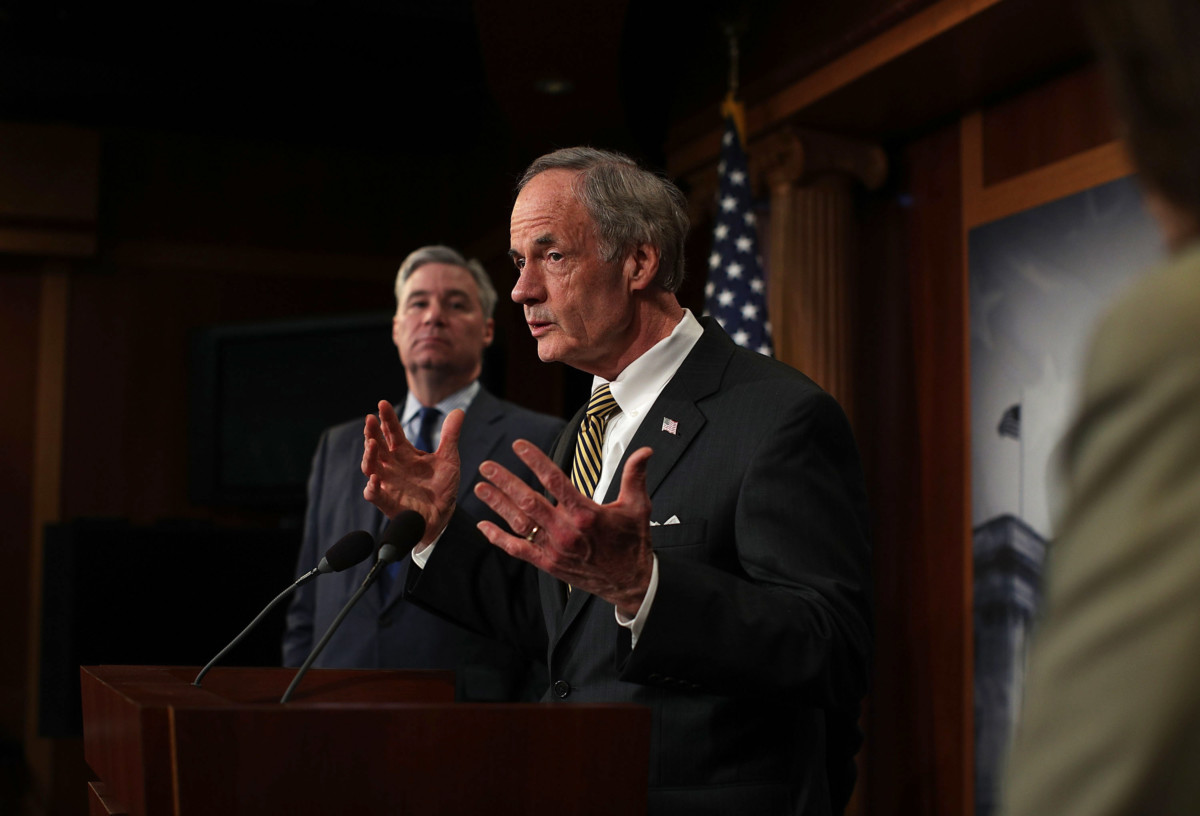 Sen. Tom Carper (D-Del) speaks during a news conference in May. (Photo by Alex Wong/Getty Images)
By Iulia Gheorghiu

The ranking member of the Senate Environment and Public Works Committee, Sen. Tom Carper (D-Del.), said he will oppose President Donald Trump’s pick to be top air regulator at the Environmental Protection Agency, repeating the reasons he shot the candidate down more than a decade ago.

But it’s unclear Democrats will have the power to block his confirmation this time around, with Republicans on the committee praising William Wehrum’s experience.

Wehrum, an environmental lawyer at Hunton & Williams LLP, has been tapped to lead the EPA’s Office of Air and Radiation, the same role he served in an acting capacity during the administration of former President George W. Bush. The Bush White House eventually rescinded his 2006 nomination for a permanent post after Democrats won control of the Senate and blocked it.

If confirmed, Wehrum would be responsible for setting the public health agenda under the Clean Air Act, which regulates air pollution on a national level. Wehrum’s track record, however, worries environmental groups that point to the Trump administration’s attempts to halt several environmental regulations or roll back Obama-era standards.

Carper, the top Democrat on the committee considering Wehrum’s nomination at a hearing on Wednesday, said in his opening remarks that he continues to oppose Wehrum as he did under the Bush administration, since Wehrum has not advocated for stronger clean air rules since he left the EPA and has represented the industry in several lawsuits against the agency.

His knowledge and expertise is second to none.

The Democrat said Wehrum “deferred too frequently to industry rather than protecting public health.”

Wehrum said in the hearing that he is already working closely with the EPA’s ethics officers regarding his work in the private sector. “I commit that I will strictly follow the regulations that will apply to this transition,” he said.

Sen. Jeff Merkley (D-Ore.) joined Carper in his opposition to Wehrum, saying he would block the lawyer’s nomination when Wehrum didn’t give a “yes” or “no” answer to Merkley’s question about whether human activity caused climate change.

While Wehrum worked for the EPA for six years, as acting assistant administrator or chief counselor to the Office of Air and Radiation, public health and environmental groups successfully challenged several attempts to roll back standards in the Clean Air Act, but the legal battles ultimately led to delays in enforcement.

Wehrum said Wednesday that he thought those lawsuits misrepresented the larger amount of work performed by the Office of Air and Radiation.

The Republican senators, who hold the majority on the panel, commended Wehrum’s experience during the hearing.

“His knowledge and expertise is second to none,” said Sen. Jim Inhofe (R-Okla.), who led the EPW committee when it approved Wehrum’s nomination during the Bush administration and is now a senior committee member.

EPW Chairman Jon Barrasso (R-Wyo.) said after the hearing that no further timeline on the votes would be set until the Friday deadline for senators to submit other questions or comments into the record.

Bruce Buckheit, a former EPA colleague of Wehrum’s who served as director of the agency’s Air Enforcement Division, attributed to Wehrum’s influence many of the “really radical arguments” at the EPA that were struck down by courts.

Buckheit, now an independent environmental consultant, said on Monday he expects Wehrum, if confirmed, would bring the same “radical” opposition to public health and environmental regulations that he displayed in the Bush administration, which would be likely to include an effort to repeal the Clean Power Plan, a 2015 regulation to lower greenhouse gas emissions from power plants that Trump ordered reviewed.

“It will be far reaching. I hope it will lose – it probably will lose – but I expect it to come from very sophisticated angles,” Buckheit said.

Wehrum declined requests for comment, instead referring questions to the EPA.

“This was the first time in history that the Supreme Court had issued such a stay – clearly signaling the deep discomfort with the legal viability of the regulation,” Bowman said on Monday in an email. “Any delay of CPP flows directly from the fact that the court has stayed it.”

Sen. Roger Wicker (R-Miss.), who opposes the regulation, asked Wehrum if he agreed or disagreed that the Clean Power Plan “involved a reach beyond the authority granted to the EPA by Congress.” Wehrum said he would refer to the Supreme Court decision to address the legal viability.