A majority of voters back a key component of President Donald Trump’s executive order to promote the sale of health insurance that is cheaper but less generous than coverage sold under the Affordable Care Act.

Fifty-two percent of voters said they support Trump’s plan to make it easier for small businesses to band together in associations to sponsor low-cost, less comprehensive health care coverage across state lines, while 30 percent said they oppose the policy, according to a new Morning Consult/Politico poll of 1,991 registered voters that was conducted online Oct. 12-16. Nearly a fifth of voters (18 percent) said they didn’t know or had no opinion.

Voters’ initial reaction to Trump’s Oct. 12 unilateral action was much more positive compared to the response to congressional Republicans’ bills to repeal Obamacare, former President Barack Obama’s signature domestic policy achievement, but approval still fell mostly along partisan lines. Seventy-nine percent of GOP voters said they approved of Trump’s action, compared to 49 percent of independents and 31 percent of Democrats. (The poll has a margin of error of plus or minus 2 percentage points.) 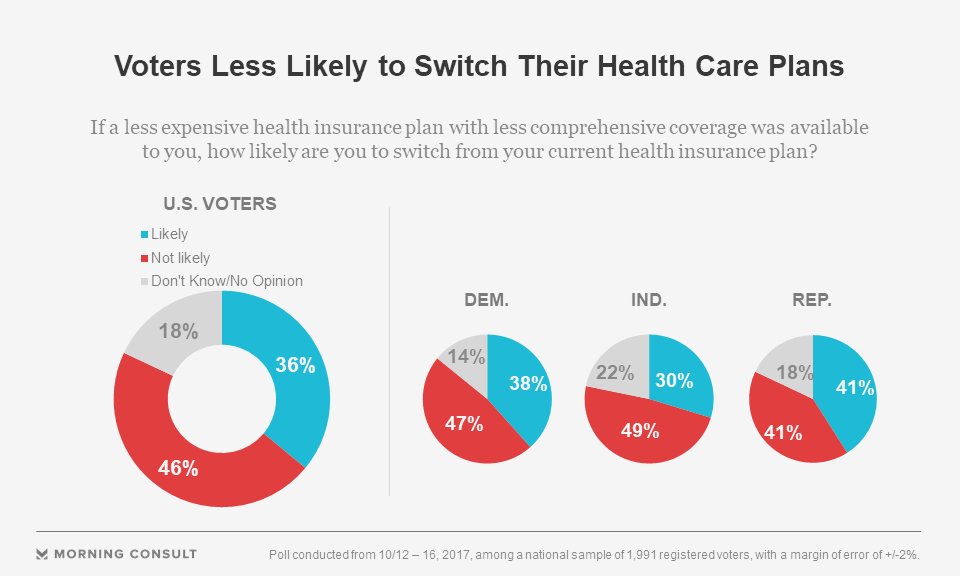 Support for Obamacare has held largely steady this year, and clocked in at 49 percent in favor and 41 percent against in the most recent poll.

Details are scarce on how the federal government will fulfill the goals of Trump’s order, which just directed three Cabinet departments to come up with a plan using the rule-making process.

Without more details, voters are divided over how the executive order would impact the nation’s health insurance system. Thirty-nine percent of all respondents, and 64 percent of GOP voters, agreed with the Trump administration’s argument that allowing insurance plans to be sold across state lines would increase consumer options and competition, causing consumer costs to decrease.

On the other hand, 36 percent of all respondents – and 57 percent of Democrats – said healthier, younger consumers would flee the Obamacare markets for cheaper insurance, causing premiums to skyrocket for high-risk individuals on the exchanges.

One in four voters said they didn’t know or had no opinion how Trump’s order would affect health insurance costs – a possible sign that public sentiment could change as the federal rule-making process advances in the coming months, said Karlyn Bowman, a public opinion analyst at the American Enterprise Institute, a center-right think tank.

Despite initial public support for Trump’s order, a plurality of 46 percent of voters said they would be unlikely to swap their current health plan for one that is cheaper with less generous coverage, while 36 percent said they would switch.

“We know from virtually all the polls that have been conducted for the last 30 years that people who have health insurance” are fairly satisfied with the health care they have, Bowman said Tuesday.

But voters’ inclination to buy cheaper coverage may be clearer once details of a plan emerge.

“I imagine a lot of the interest over time may depend very much on how the rules are written,” said Elizabeth Carpenter, a senior vice president at consulting company Avalere Health, on Monday.