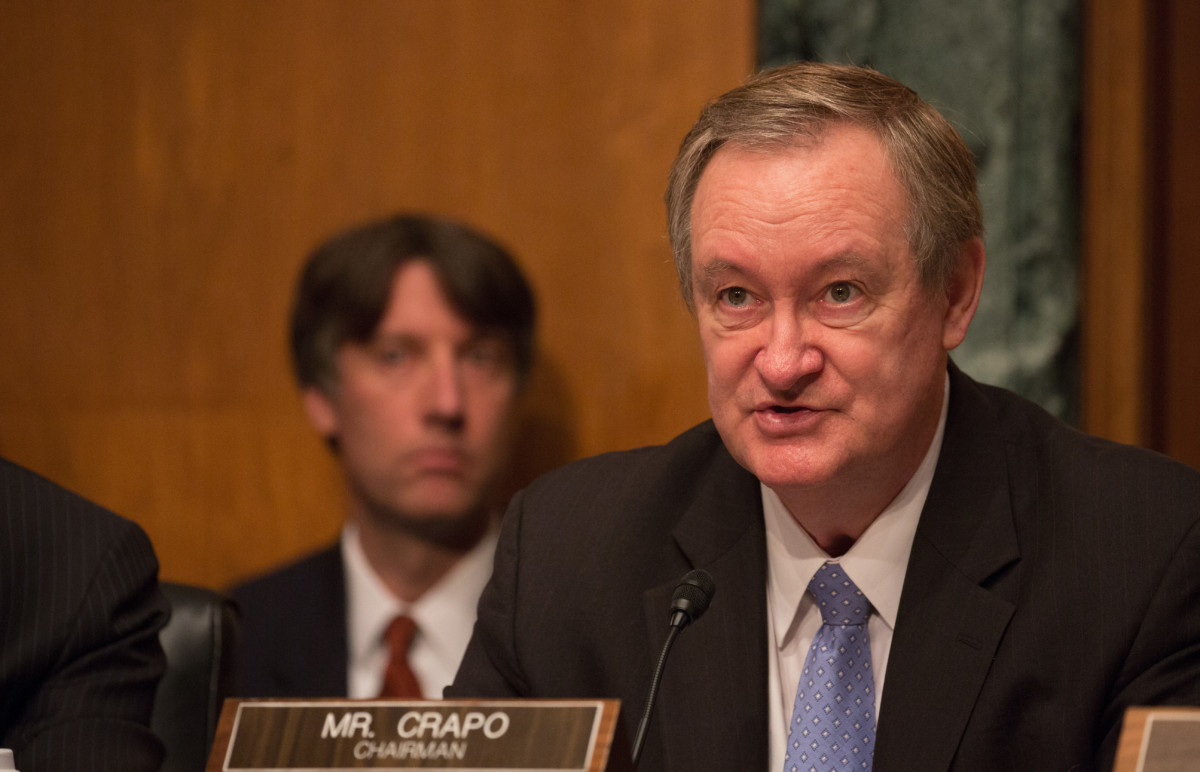 Sen. Mike Crapo (R-Idaho) at a Senate Banking Committee and International Policy hearing in Washington on on Capital Hill May 18. (Photo by Tasos Katopodis/Getty Images)
By Ryan Rainey

Republican members of the Senate Finance Committee are beginning to talk about how to square forthcoming tax-reform measure with the 2010 Statutory Pay-As-You-Go Act, which mandates major spending cuts if enacted legislation increases the deficit over a certain period.

Sen. Mike Crapo (R-Idaho), a senior member of the Finance panel, told reporters this week that he’d like to see the White House Office of Management and Budget — along with other entities like the nonpartisan Congressional Budget Office and the Joint Committee on Taxation — use dynamic scoring when compiling the PAYGO scorecard.

Under statutory PAYGO rules, the Office of Management and Budget compiles an annual scorecard of the budgetary effects of bills passed. If the scorecard shows that a new law will increase the deficit over a five-year period, the administration must enact across-the-board cuts to federal programs like Medicare and Medicaid, though Congress can issue a waiver for specific legislation.

When asked whether he’s concerned about PAYGO cuts entering into force because of a substantial tax cut, Crapo said he doesn’t believe that tax reform will ultimately drive up the deficit.

“If you’re talking about a deficit with static scoring, then I just believe Congress has to deal with that issue straight up and recognize that does not mean that, in reality, there is an actual increase in the deficit, because I don’t believe there is,” Crapo said on Wednesday.

Generally, OMB has used what’s known as a static model that doesn’t account for the potential revenue growth resulting from unpaid-for legislation when compiling its annual scorecard. Most congressional Republicans argue that a tax overhaul that has significant tax cuts will stimulate economic growth and effectively pay for itself in the long run. That approach is usually termed a “dynamic” model.

Finance Committee Chairman Orrin Hatch (R-Utah) told reporters at the Capitol on Thursday that he hasn’t been very involved in discussions about PAYGO yet. But, he said, “it’s important, and I’ll look at it.”

Sen. Pat Roberts of Kansas told reporters the same day that fellow GOP members on the Finance panel have discussed PAYGO rules but mostly in the context of dynamic scoring for tax reform.

Ed Lorenzen, a senior adviser at the Committee for a Responsible Federal Budget who worked for PAYGO supporter Rep. Steny Hoyer (D-Md.) when the law was passed in 2010, said OMB has two options for determining how to score legislation.

Under the first option, the administration would follow a CBO estimate that accompanies the legislation — the intended process under the PAYGO rules, Lorenzen said — and the Office of Management and Budget would not score the legislation on its own if the CBO analysis is already part of the tax measure.

If the legislation is not accompanied by a CBO estimate, the White House budget office can then move forward with its own projections. The law requires an OMB-compiled estimate to avoid including “changes in economic assumptions,” Lorenzen said.

OMB representatives did not return a request for comment.

The statutory PAYGO rules are separate from Senate rules that allow lawmakers to put a hold on legislation that would lead to revenue losses without offsets. The Senate on Thursday rejected an amendment to the fiscal year 2018 budget resolution, offered by Sen. Mark Warner (D-Va.), that would remove language from the budget measure exempting $1.5 trillion in revenue losses from the Senate’s PAYGO rules.