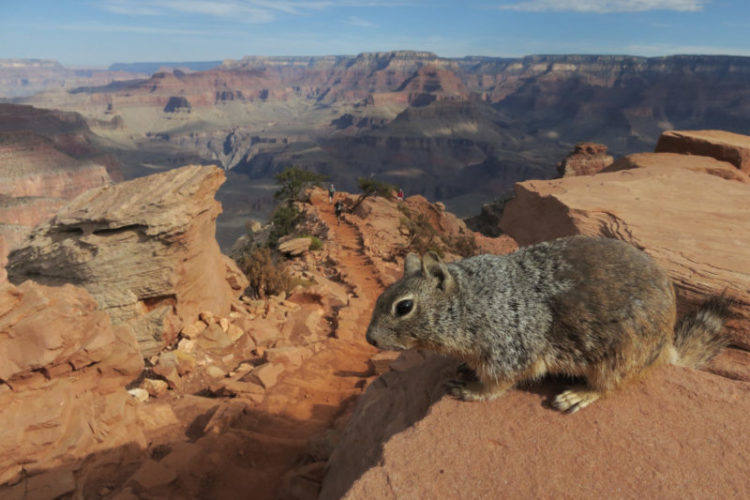 A squirrel stands at the South Keibab Trail at the Grand Canyon South Rim on July 13, 2014 at Grand Canyon National Park, Arizona. (Photo by Sean Gallup/Getty Images)
By Iulia Gheorghiu

A majority of U.S. voters oppose increasing fees for national parks during peak season to pay for park infrastructure and maintenance.

The National Park Service proposed implementing higher entrance fees at 17 of its busiest parks for five-month periods based on park traffic in order to address its maintenance backlog of more than $11 billion.

A Morning Consult/Politico poll conducted Oct. 26-30 shows a majority of registered voters oppose the proposed fee hikes, regardless of the region they live in or their political ideology.

Fifty-two percent of registered voters said they do not support increasing the cost — currently between $25 and $30 — to $70 for each private vehicle entering one of the parks during peak season, while 36 percent support the higher fees. The fees would apply to popular national parks including Grand Canyon, Yellowstone and Yosemite.

In the West, where most of the affected parks are located, 55 percent oppose the fee increase and and a third support it. A majority of Democratic, independent and Republican voters also oppose the cuts. 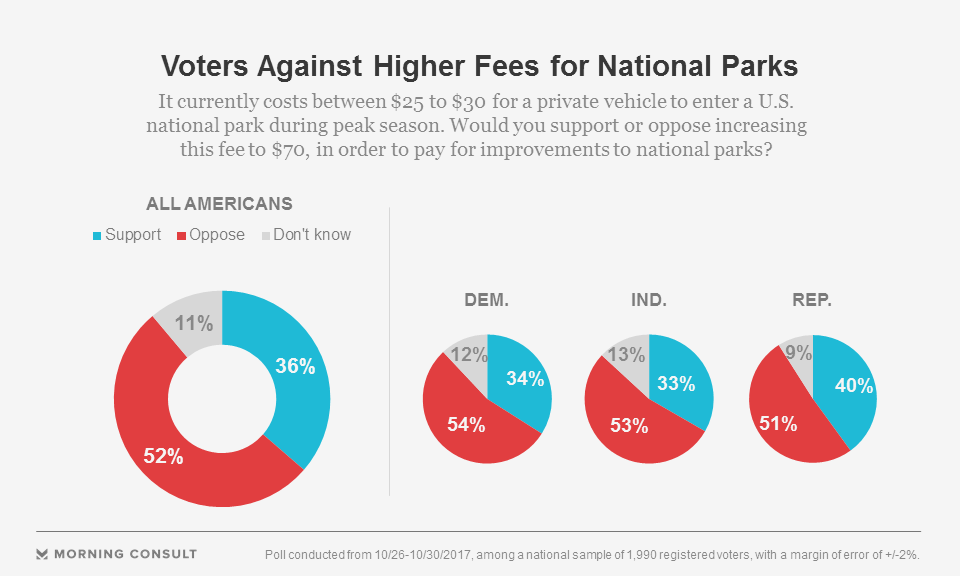 National Park Service spokesman Jeremy Barnum said the poll left out important context about the conditions of the fee increase. For instance, the $70 vehicle pass would be valid for seven days and the majority of national parks do not charge an entrance fee.

“The new revenue generated from the proposed peak-season fee increases would be critical in improving the aging infrastructure and facilities at parks that are welcoming more visitors than ever,” Barnum said in a Tuesday email.

The fee hikes could raise the agency’s annual revenues by 34 percent, or approximately $70 million, based on park service estimates. Phil Francis, vice chair of the Coalition to Protect America’s National Parks, which is made up of current and former national park employees, said opposition from voters is not surprising given the unprecedented amount of the fee increase.

“If the poll takers knew that the huge fee increase would only pay less than 1% of the cost of deferred maintenance and that the Congress is considering a budget reduction once again for the NPS, then I think more people would have opposed the increase,” Francis said in an email on Tuesday.

The proposal also doesn’t address the need for raising federal funding levels to address the scope of the backlog, according to John Garder, senior director of budget and appropriations at the National Parks Conservation Association.

In its budget proposal to Congress, the Trump administration recommended a roughly $297 million cut to the national park protector’s appropriations.

“It’s appropriate for the administration to investigate the park service’s fee structure because fees are helpful in supplementing federal funding, but the increase is steep and sudden and there are many unanswered questions about what research may have been done—or not done—to arrive at the proposal,” Garder said in an email on Tuesday.

Several Democrats in Congress have publicly opposed the proposal, and 12 Democratic senators wrote to Interior Department Secretary Ryan Zinke on Oct. 26 asking him to withdraw the planned fee hikes. (The National Park Service is an agency of the Interior Department.)

The House Natural Resources Committee agrees with the need to address the park service’s maintenance backlog, said Katie Schoettler, a spokeswoman for the committee and Chairman Rob Bishop (R-Utah).

“The Department has the authority to set and change fees and will undergo a public comment on this proposal. Mr. Bishop wants to reform the entire recreation fee system to have Congress play a greater role in determination of fees,” Schoettler said in a Tuesday email.

The park service is accepting public comment on the proposed fee increases, which would take effect in 2018, until Nov. 23.