Once a GOP hero, he's now bucking his party's leadership on a key issue 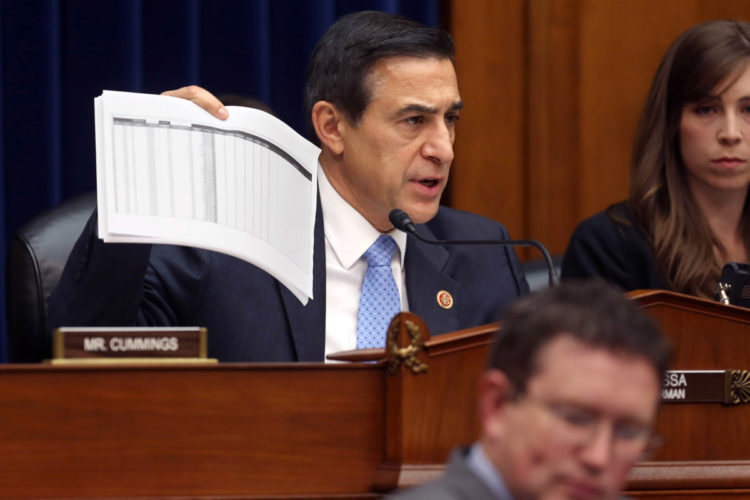 Issa, a car alarm magnate and one of the wealthiest members of Congress, said Tuesday he could not support the Republican tax bill in its current form. Issa is the first in California’s 14-member House GOP delegation to join Northeast Republicans in opposing the proposed elimination of tax breaks disproportionately used by individuals in their states.

“I’ve made my decision on the current form and let leadership know my concerns,” Issa said in an interview Wednesday. “I’ve said that their graphs are inaccurate and sat down with accountants in my district to substantiate the theory that everyone gets a tax cut doesn’t work because not everyone gets a tax cut when you reduce by far more than the one and a half trillion [dollars] they’ve scored.”

It’s a striking departure from party orthodoxy for Issa, who as chairman of the Oversight and Government Reform Committee from 2011 to 2015 made himself former President Barack Obama’s chief investigative nemesis — leading probes into the Obama administration’s handling of the September 2012 tragedy at the U.S. mission in Benghazi, Libya, in which four Americans were killed. The lawmaker also led Republican members of his panel in holding then-Attorney General Eric Holder in contempt of Congress for allegedly withholding information.

The moves made Issa a hero to Republicans.

But since an unexpected electoral scare in 2016, in which Issa narrowly beat Democratic challenger Doug Applegate 50.3-49.7 percent, the congressman has struck a less partisan tone. Issa on Wednesday said his dedication to his constituents sets him apart from anti-Donald Trump backlash that could endanger a 2018 race.

Issa’s generally high-earning and well-educated suburban district is among seven Golden State Republican-held House districts that backed Hillary Clinton over now-President Donald Trump in the 2016 race. Issa’s district supported the Democratic nominee with 50.7 percent of the vote, compared to 43.2 percent for Trump.

“Eight out of 10 people that voted for Hillary [Clinton] voted for me,” Issa noted. “I’ve already differentiated myself as somebody who reflects the values of my district.”

The SALT issue plays into that sort of back-home tone that could potentially boost his re-election prospects.

Under current law, taxpayers can deduct their state and local property taxes, as well as state income taxes or sales tax. The proposed House bill would eliminate the deduction for income and sales taxes, and cap the property deduction at $10,000. The elimination of the state and local tax deduction would disproportionately affect high-tax states like New York and California — according to Tax Foundation estimates, the two states receive nearly one-third of the deduction’s total value.

The deduction is used heavily in districts like Issa’s — California’s 49th, which covers northern coastal San Diego County and the southernmost beach-front territory in Orange County. The Government Finance Officers Association calculates that in Issa’s district, 35 percent of filers take the state and local tax deduction, with an average deduction of $16,524.

“For Issa, this is one of those situations in which politics and policy go hand-in-hand,” said Reed Galen, an independent political consultant who worked as deputy campaign manager for John McCain’s presidential campaign and Arnold Schwarzenegger’s 2006 re-election.

Galen said Democrats are holding steady and registered independent voters are on the rise in California — none of which is lost on Republicans up for re-election.

“Those who loathe Donald Trump and would ship him off to a desert island will try everything to tie Issa to Trump, repealing Obamacare, and a tax bill that has been reported to soak the middle class on behalf of corporations,” Galen said in an interview Wednesday. “Politics and policy in this particular case lined up.”

While GOP lawmakers from New York were quick to push back against the elimination of state and local taxes, with New York Reps. Lee Zeldin and Peter King both saying last week they would not vote for the bill in its current form, California’s GOP delegation had so far avoided addressing the issue, earning criticism from their Democratic colleagues.

If we don’t get a tax bill done, it is the biggest political problem we have. If we do, and it does eliminate the state and local deduction, there will probably be a political price to pay.

The effects of the provisions vary widely across the state. In Rep. David Valadao’s rural Central Valley district, for example, Valadao’s spokeswoman Anna Raquel Vetter said that 8 of 10 constituents do not file itemized returns. Valadao last week endorsed the Republican bill as a job creator and economic driver.

“Congressman Valadao is focused on ensuring his constituents, living in rural California, get to keep more of their hard-earned money,” Vetter said in a statement Tuesday.

Other California Republicans on Tuesday declined to take a position. Ken Grubbs, spokesman for Rep. Dana Rohrabacher, said in an email the lawmaker does not have a comment until he studies the bill more thoroughly. Rep. Tom McClintock’s spokeswoman, Jennifer Cressy, said in an email he would prefer for the SALT deduction to remain, “but ultimately the bill will have to be voted on as a single package, and he’s waiting to see what that will look like.”

Republican strategist Jason Roe, who is based in San Diego, says California’s GOP delegation is cautious and waiting for committee and conference action to try and “mitigate” the negative impact of eliminating the state and local deduction. But in a Tuesday interview he noted that “anyone who reads the paper in California” is concerned about the effects on the state.

“If we don’t get a tax bill done, it is the biggest political problem we have,” Roe said. “If we do, and it does eliminate the state and local deduction, there will probably be a political price to pay.”

Related: After Gillespie Loss, Corey Stewart to Put Trump at Center of Senate Run in Virginia

Issa said Wednesday that the Nov. 7 Democratic victories in Virginia did not concern him.

“I can tell you in my district, feelings about the last election, since last year, nothing’s really changed — people who didn’t like Trump don’t like Trump, the people who wanted government to get things done still want it done,” he said. “I don’t see a lot of difference in my district and that’s the only politics I follow, what I call my Costco-Home Depot politics because in those places people walk up to you and they actually want to talk about something.”

Galen, the independent political consultant, said off-year elections during a president’s first term are usually a poor indicator of broader political trends, but added, “Look, last night was a big night for Dems. I’m going to reserve judgement about what that means for next year, but the arrows are starting to inch in that direction.”