Biden Would Beat Trump if 2020 Election Were Held Right Now

In a potential race between two national figures who tout their appeal to working-class voters, former Vice President Joe Biden would beat President Donald Trump if the 2020 election were held today, according to a new poll.

A Nov. 9-11 Morning Consult/Politico survey, conducted as the former Democratic senator from Delaware and two-term vice president prepared to kick off his book tour this week, found Biden with an 11-point advantage over the incumbent Republican president among registered voters, leading 46 percent to 35 percent.

Biden’s advantage in the hypothetical matchup was bigger among people who identified as having voted for Hillary Clinton in 2016 than it was with people who said they voted for former President Barack Obama in 2012. Among Clinton supporters, Biden leads Trump 85 percent to 3 percent, while among Obama’s supporters, Trump trails 73 percent to 12 percent.

Biden has dabbled in the 2020 talk as he seeks to promote his new book, “Promise Me, Dad: A Year of Hope, Hardship, and Purpose.” When asked about the 2020 campaign in an interview posted on Snapchat Tuesday alongside Ohio Gov. John Kasich, Biden said he and Kasich — a runner-up to Trump in the 2016 Republican presidential primary sweeps — were hoping their parties would generate “some real energetic people who have the depth and the capacity to do it.” 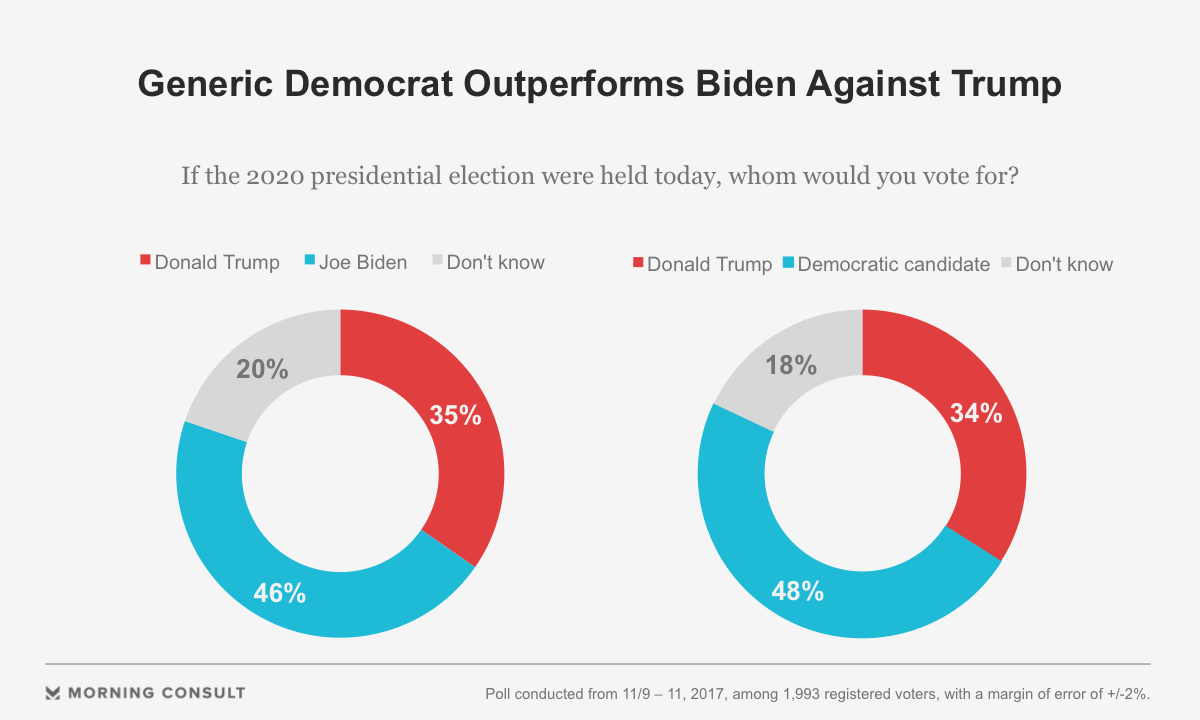 If he chose to run, Biden would likely be part of a large field of Democrats seeking their party’s nomination to challenge Trump. Biden, who grew up in Scranton, Pa., before his family moved to Delaware, has mused about attracting support from the kind of blue-collar and rural voters that helped propel Trump into the White House.

Neither Biden nor the White House responded to requests for comment.

Biden’s lead among all respondents is not too far off from a generic Democratic candidate’s performance against Trump: The survey, which interviewed 1,993 registered voters, found Trump trailing an unnamed Democratic candidate 48 percent to 34 percent.

Related: The Most Popular 2020 Democratic Prospect Not Named Joe Biden

Scott Jennings, a Republican strategist who worked as a deputy political director in former President George W. Bush’s administration, said he was not surprised Biden leads Trump in a hypothetical matchup — in part because the current president’s approval is so low. The poll found Trump 10 points underwater, with 42 percent of registered voters approving while 52 percent said they disapproved of the president. (That is within the plus or minus 2 percentage-point margin of error of where his approval was last week.)

“What concerns me is that people are taking increasingly positive views of the economy but it isn’t building Trump’s job approval or ballot score,” Jennings said in a Tuesday email. “People say that putting points on the board will improve Trump’s numbers, and I agree with that, but only if the White House can find a way to ensure a better economy and other accomplishments are directly attributable to Trump’s leadership.”

Jennings, who lives in Kentucky, a state Trump won by nearly 30 points, said Biden’s style “is more likely to be successful in the places where Trump swamped Clinton,” such as former manufacturing and coal towns. The nod to Biden’s style was echoed in a separate interview with Biden’s former press secretary, Kendra Barkoff Lamy.

“He has an ability to connect with voters in a way that no one else can,” Lamy said, adding that Biden has a “consistent message” of fighting for the middle class. “He has empathy, respect, the ability to listen, but at the same time share his views. I think that is a very amazing quality that our current president doesn’t have.”

Lamy, now with SKDKnickerbocker, said despite the recent spate of headlines about 2020, Biden is laser-focused on one mission right now.

“What people, I think, don’t quite understand is he is really doing this book tour. He knows there’s a ton of speculation about 2020, but his focus is on his book,” she said Tuesday.