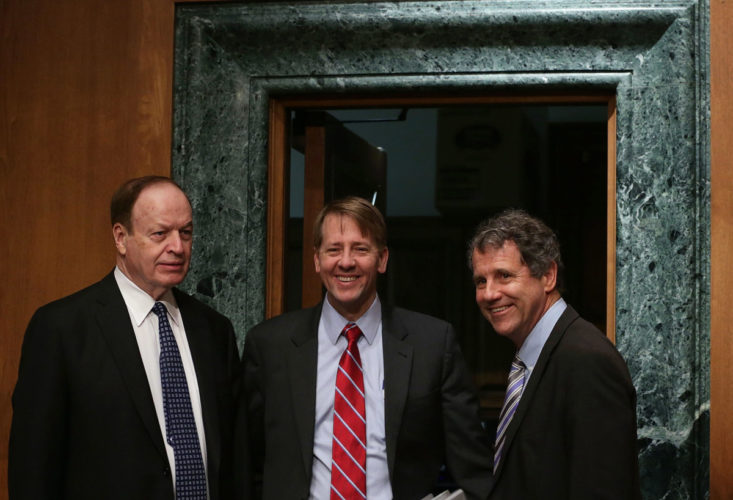 Wednesday’s news that Consumer Financial Protection Bureau Director Richard Cordray plans to resign by the end of this month was met with predictable jubilation from Republicans who have frequently criticized his management of the young agency throughout his tenure.

Democrats who have supported Cordray, however, made it clear they will expect President Donald Trump to name a replacement who shares at least some of their priorities on consumer financial issues.

Cordray, the first CFPB director to hold the position permanently since the agency began operations in 2011, announced in a memo to agency staff that he expects to step down from his post by November’s end.

The former Ohio attorney general’s memo did not specify reasons for his departure, but political observers have speculated for several months that he might seek the open governor’s office in his home state. The Columbus Dispatch reported Wednesday that leading Ohio Democrats expect Cordray to seek the party’s gubernatorial nomination.

White House spokesman Raj Shah said in a statement provided to Morning Consult that the Trump administration “will announce an acting director and the President’s choice to replace Mr. Cordray at the appropriate time.” The procedures for succeeding Cordray on an acting basis are still up for debate.

Some Republicans have been anticipating Cordray’s departure for months, and have implicitly accused him of hastily finalizing major agency rules — like the recently enacted rule on small-dollar lenders — for political reasons. House Financial Services Committee Chairman Jeb Hensarling said in a Wednesday statement that Cordray’s resignation is an opportunity to reform the bureau.

“The Bureau has an important mission,” the Texas Republican stated. “Properly designed and led, it can truly protect consumers by ensuring they have access to competitive markets that are vigorously policed for fraud.”

Rep. French Hill of Arkansas, a Republican on the Financial Services Committee, said in a statement he was “pleased to hear” Cordray will be stepping down, and that the CFPB needs new leadership that brings “accountability to this rogue agency and respects our laws while implementing much-needed reforms.”

This is not the place for another Trump-appointed industry hack.

In the wake of Cordray’s announcement, concerned Democrats have turned their attention to ensuring Trump nominates a replacement who reflects at least some of their views. Sen. Elizabeth Warren (D-Mass.), one of the agency’s architects and a member of the Senate Banking Committee, said in a statement that the next director “must be someone with a track record of protecting consumers and holding financial firms responsible when they cheat people.”

“This is not the place for another Trump-appointed industry hack,” she said.

“The White House has said it wants to stand up for the middle class,” Brown said in a Wednesday statement. “If that’s true, the President must nominate a successor who will put working people ahead of Wall Street.”