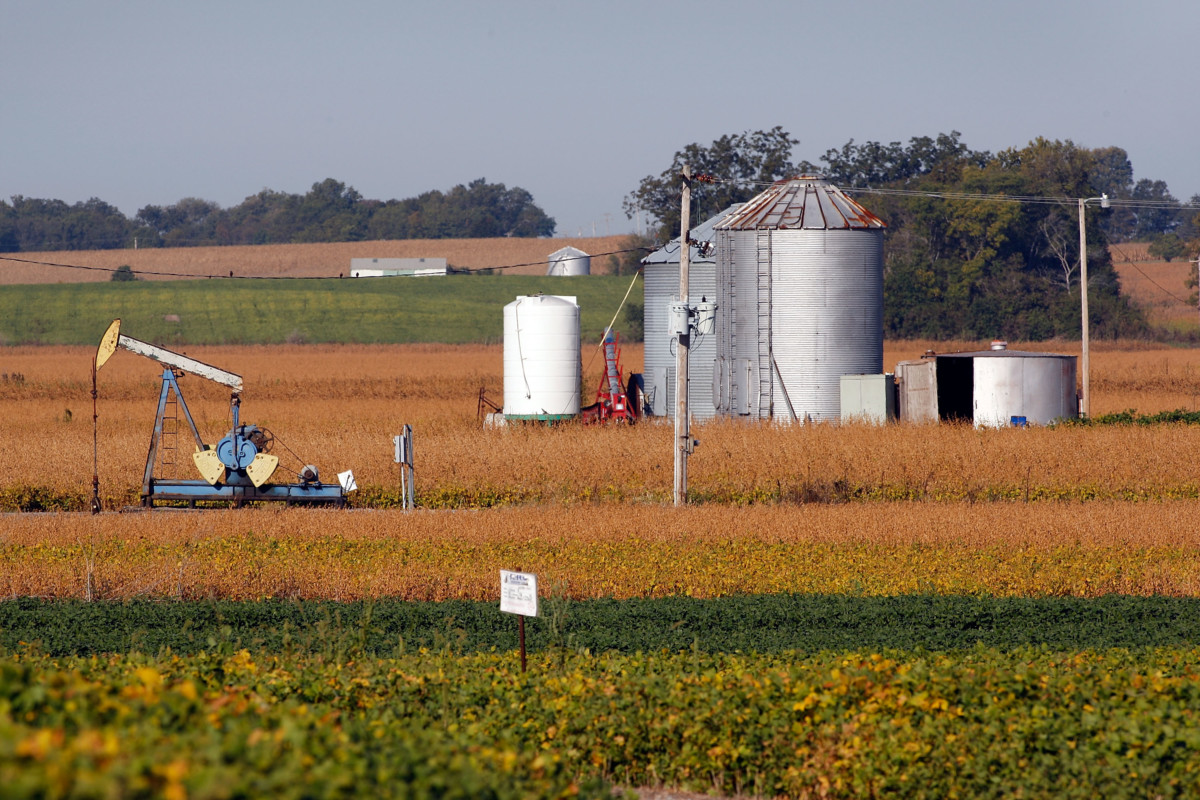 An oil well sits in the middle of a soybean field in October 2008 near New Haven, Illinois. Crude oil production in Illinois has been steadily declining since its peak in the mid-1980s. The state is now one of the nation's top ethanol producing states. (Photo by Scott Olson/Getty Images)
By Iulia Gheorghiu

The Environmental Protection Agency is unlikely to delight either opponents or supporters of its Renewable Fuel Standard Thursday, when it is set to determine next year’s requirements for mixing ethanol and other biofuels into the U.S. gasoline supply.

The EPA — which faces a Nov. 30 deadline to set volume requirements — in July proposed lowering the 2018 level for how much renewable fuel must be mixed into gasoline or diesel, and experts say it’s likely to stick by that proposal, or at least keep levels equal to this year’s volumes.

That would satisfy neither the refinery industry, which has complained about the burden of the mandate and wants structural changes to the program, nor the renewable fuels industry, which wants a guaranteed higher level of demand that could provide certainty for future investments and growth.

Lawmakers from Corn Belt states, which rely on the mandate to drive the production of corn-based ethanol, have pressured EPA Administrator Scott Pruitt to reconsider cutting the biofuels quota and to increase the volume of biodiesel in the agency’s ethanol mandate for 2018.

Pruitt did not commit to increasing the volumes for renewable fuel standards in an Oct. 19 letter to seven Republican Corn Belt senators.

The EPA doesn’t have a lot of statutory authority to cut volume obligations and its final decision is expected to match the agency’s July proposal, Tristan Brown, a professor of biorenewable resources at the State University of New York at Syracuse, said in a Tuesday interview.

But volumes set below or at this year’s levels could shrink or stall the biofuel market, said Brooke Coleman, the executive director of the industry group Advanced Biofuels Business Council, adding that the intent of the mandate was to continue growing the market.

“What you see right now is a biofuel industry that wants to be positive, that wants to thank the president and appreciate support for the RFS that goes back to the campaign, but it’s just going to be really hard to do that if the 2018 volume obligations are smaller than 2017 volume obligations,” Coleman said in a phone interview on Wednesday, referring to President Donald Trump’s campaign promises to support the ethanol mandate.

An EPA spokesman said the proposed rule went through public comment and interagency review, and stakeholders can file petitions for reconsideration with the EPA or the court of appeals.

Sen. Joni Ernst (R-Iowa), a major supporter of higher RFS volumes, said in a brief interview Tuesday that lawmakers and others will continue to work with the Trump administration on the issue — no matter what the EPA decides Thursday.

In the letter to Corn Belt senators, Pruitt said he would scrap some fundamental changes to the program that the refining industry wanted.

Valero Energy Corp., a key petitioner in the effort to change the point of obligation, and other refining groups did not respond to a request for comment on their expectations for the upcoming RFS decision.

Refiners are likely to be unhappy with Thursday’s decision, and are expected to continue pressuring the administration to alleviate the burden of the biofuels mandate, according to Denton Cinquegrana, the chief oil analyst at the Oil Price Information Service. But Cinquegrana added in a Tuesday interview that he doesn’t expect the 2018 mandate to drive any companies out of business.