While a small minority sees the film series as political, die-hard fans have long debated the perceived undercurrents 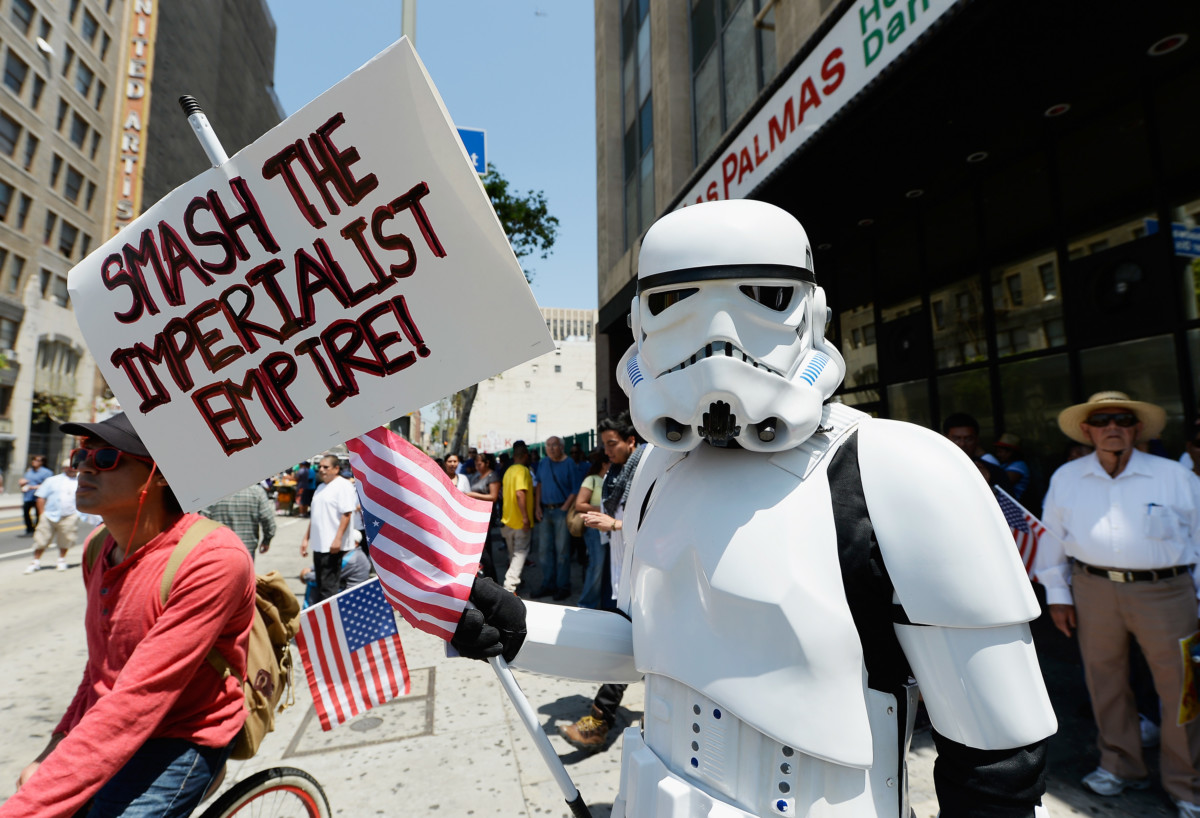 A demonstrator wearing a Star Wars storm trooper uniform participates with thousands of people in a May Day march and rally in May 2013 in Los Angeles, California. (Photo by Kevork Djansezian/Getty Images)
By David Mark

If you’re looking to stay away from heated debates with your loved ones this holiday season, it may be a good idea to add Star Wars to the list of topics to avoid.

But the movie series is unlikely to provoke a war of words around the dinner table the way talking about religion or politics would (unless you happen to be a fan of Jar Jar Binks): Ahead of the Dec. 15 release of “Star Wars: The Last Jedi,” 53 percent of respondents in a Morning Consult poll of 2,200 U.S. adults say they don’t consider Star Wars to be political. Of the 17 percent who do, 41 percent say they’re bothered by the series’ political tone.

Of that group, 21 percent said they still watch the movies, while another 20 percent said the perceived politics of the series stops them from watching. The poll, conducted Dec. 1-4, has a margin of error of plus or minus 2 percentage points.

While the poll found a small minority of respondents who find the politics of Star Wars bothersome, among a number of enthusiasts, fanatics — and well, geeks — the movies’ perceived political undercurrents have long been a source of fascination and fierce debate. 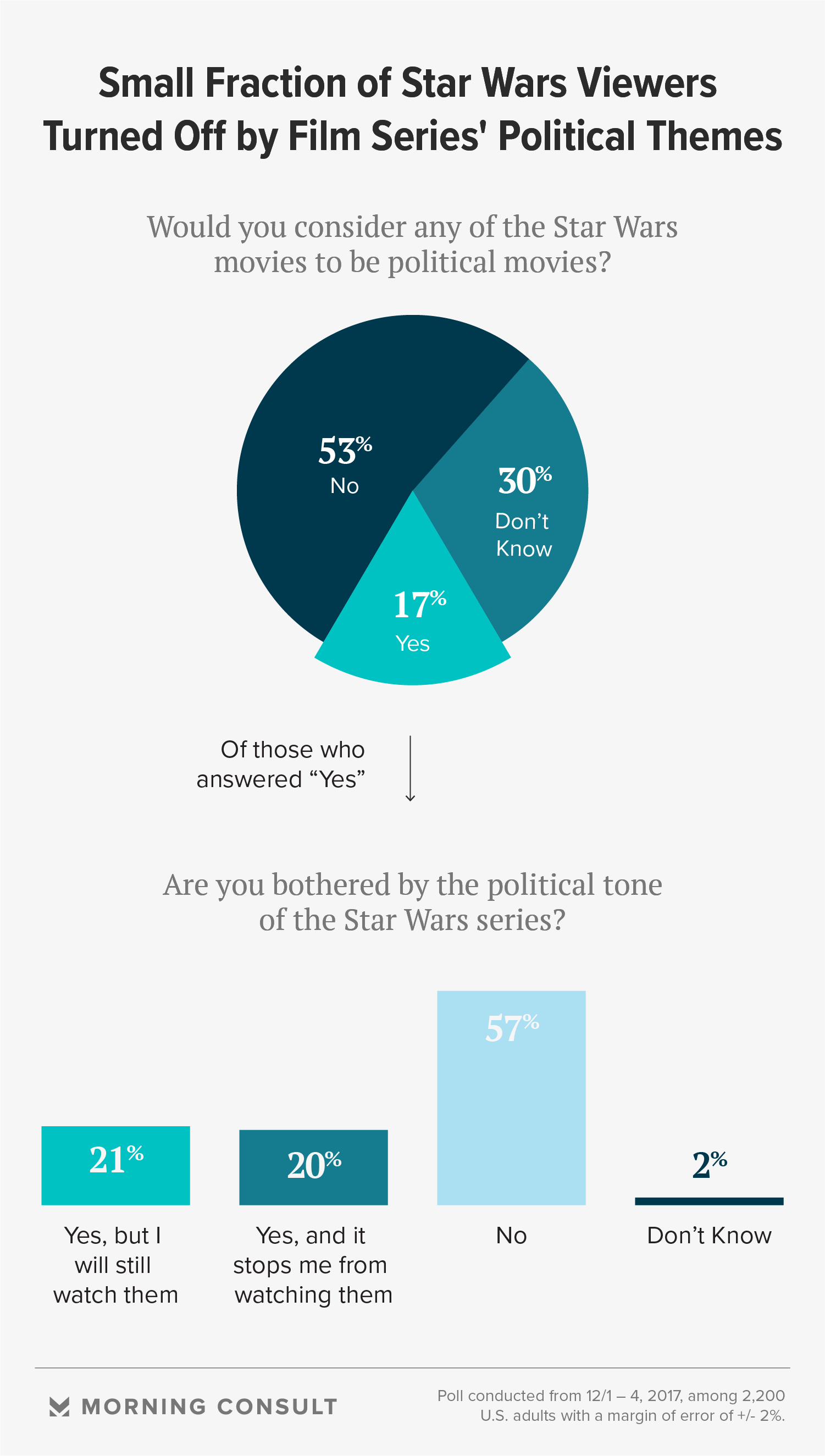 Chris Taylor, author of “How Star Wars Conquered the Universe: The Past, Present, and Future of a Multibillion Dollar Franchise,” contends that the left-leaning politics in Star Wars were planned from start, as seen in series creator George Lucas’ early notes that described the “Nixonian gangsters” that run the Galactic Empire.

“It doesn’t surprise me that the majority of the public isn’t aware about the left-wing political origins of ‘Star Wars,’” Taylor said in an email Tuesday. “They are well-buried under layers of space fantasy, mythology, and a fairy tale that was primarily designed for children.”

When the prequel “The Phantom Menace” was released approximately 16 years after “Return of the Jedi,” many saw less-than-veiled hints at Lucas’ liberal worldview, such as the names of two bumbling and cowardly Neimoidian criminal-syndicate types, Trade Federation heavies Nute Gunray and Lott Dod. Some viewers at the time noted that those names sounded suspiciously like two of the most prominent conservatives during the movie’s May 1999 debut – then-Senate Majority Leader Trent Lott (R-Miss.) and deposed House Speaker Newt Gingrich (R-Ga.).

“The prequel trilogy was more overtly political, in that it was designed to show what happens when a Republic gives itself over to an anti-democratic authoritarian (in the form of Emperor Palpatine),” Taylor noted. “I have to think that when people say they are ‘bothered by the political tone,’ this is what they are thinking of — and that they’re also thinking of the ponderous pace and poor plotting of the prequels in general.”

“If you’re not with me, then you’re my enemy,” Vader says in the 2005 prequel finale. The line echoes Bush’s international ultimatum after the Sept. 11, 2001, terrorist attacks: “Either you are with us, or you are with the terrorists.”

But the political messages from Star Wars shouldn’t be over-read, said Jonathan V. Last, a Weekly Standard senior writer whose 2002 article “The Case for the Empire” draws fresh interest with each film release.

Sometimes it’s just clumsy filmmaking, Last suggested in a Tuesday email. Look no further than Jar Jar Binks, a Gungan introduced in “The Phantom Menace” who is considered one of the Star Wars saga’s least liked characters.

“My general view is that Lucas is so confused as a storyteller that even if he was trying to smuggle politics into ‘Star Wars,’ no one would be able to figure out what the political messaging was,” Last said. “Because if Lucas wanted the glorify the Viet Cong by using the Ewoks as stand-ins for them, he failed miserably: The Ewoks are the most-hated trope from the original trilogy.”

The Walt Disney Co., which owns the Star Wars properties, and Lucasfilm, Lucas’ production company, did not respond to requests for comment.