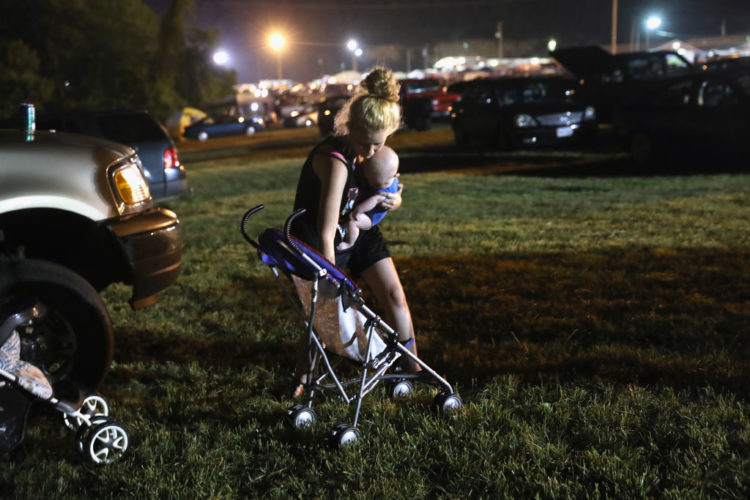 A woman with her 6-month-old son getting ready to enter the Remote Area Medical mobile clinic in July in Wise, Va., which provides dental, medical and vision services to uninsured and underinsured people. (Photo by John Moore/Getty Images)
By Jon Reid

Two-thirds of voters in a new poll indicated support for shutting down the federal government until Congress reauthorizes the Children’s Health Insurance Program, which lawmakers let expire in September amid partisan disagreements over how to pay for a funding extension.

With funding for government operations set to expire on Friday absent congressional action, 67 percent of respondents said they support shutting down the government over CHIP, according to a Morning Consult/Politico poll conducted Dec. 1-3. By contrast, 23 percent of voters said they oppose letting government funding expire until Congress renews the program, which affects almost 9 million children in families with low and moderate incomes.

The nationwide online survey of 1,997 registered voters has a margin of error of plus or minus 2 percentage points.

Backing for CHIP was strong regardless of a voter’s political affiliation. Seventy-seven percent of Democrats said they support a government shutdown over CHIP funding, as did 63 percent of both independents and Republicans.

In the absence of a funding extension, all 50 states are expected to exhaust their federal funds at some point in fiscal year 2018, and Arizona and Minnesota will run out of their CHIP money by the end of this month, according to an Oct. 31 report by the Medicaid and CHIP Payment and Access Commission.

Bruce Lesley, president of children’s advocacy group First Focus, said voters’ prioritization of CHIP reflects the public’s recognition of the challenges that many states are facing.

The lack of a CHIP funding extension is “having real ramifications,” Lesley said by phone Wednesday.

While there is broad bipartisan support for CHIP on Capitol Hill, Republicans and Democrats have failed to reach a deal to reauthorize the program because they haven’t come to an agreement on funding offsets. Lawmakers in both parties say CHIP is a top priority, but the program has been frequently overshadowed this year by more politically charged issues like repealing the Affordable Care Act and passing tax reform.

“The chairman is continuing to make progress in his discussions on how best to address this issue on the Senate floor and remains confident this will be resolved before the year’s end,” she said.

The committee approved legislation on Oct. 4 that would extend CHIP funding for five years.

A short-term spending bill that would extend government funding for two weeks, which has been introduced by House Republicans, would temporarily let the Centers for Medicare and Medicaid Services send unused CHIP money from previous fiscal years to states that the agency determines have a funding shortfall.

With CHIP, “you have an issue that Washingtonians have paid no attention to that clearly resonates with people out in the hinterlands,” Robert Blendon, a health policy director at Harvard University, said in a phone interview Wednesday.

Another cause for the substantial interest in CHIP among voters, Blendon said, could be residual attention from the fight over Obamacare. Following this year’s GOP efforts to repeal the 2010 law, voters could be responding to the possibility of people — in this case, children — losing health coverage, he said.

“I think from the prior debate there’s this real sensitivity that we should not take coverage away from people,” said Blendon, who directs the Harvard Opinion Research Program.

Among the other high-profile issues before Congress, voter support for shutting down the government over CHIP ranks higher than new hurricane recovery aid for Texas, Florida and Puerto Rico (61 percent) and an increase in funding for defense and homeland security (59 percent).

Meanwhile, 47 percent of voters said they backed closing the government until Congress passes a measure protecting from deportation people who were brought to the United States illegally when they were children — a top legislative priority for congressional Democrats. And 34 percent of poll respondents said there should be a government shutdown until Congress passes funding for President Donald Trump’s U.S.-Mexico border wall.