The Federal Communications Commission’s recent reversal of Obama-era net neutrality rules was the “wrong thing” to do, according to 45 percent of registered voters in a new Morning Consult/Politico poll, with 21 percent saying the long-anticipated move was the right decision.

But despite voter opposition to the agency’s repeal of the rules, overall support for net neutrality has dropped 11 percentage points since a June poll, when 60 percent of respondents approved of the regulations. 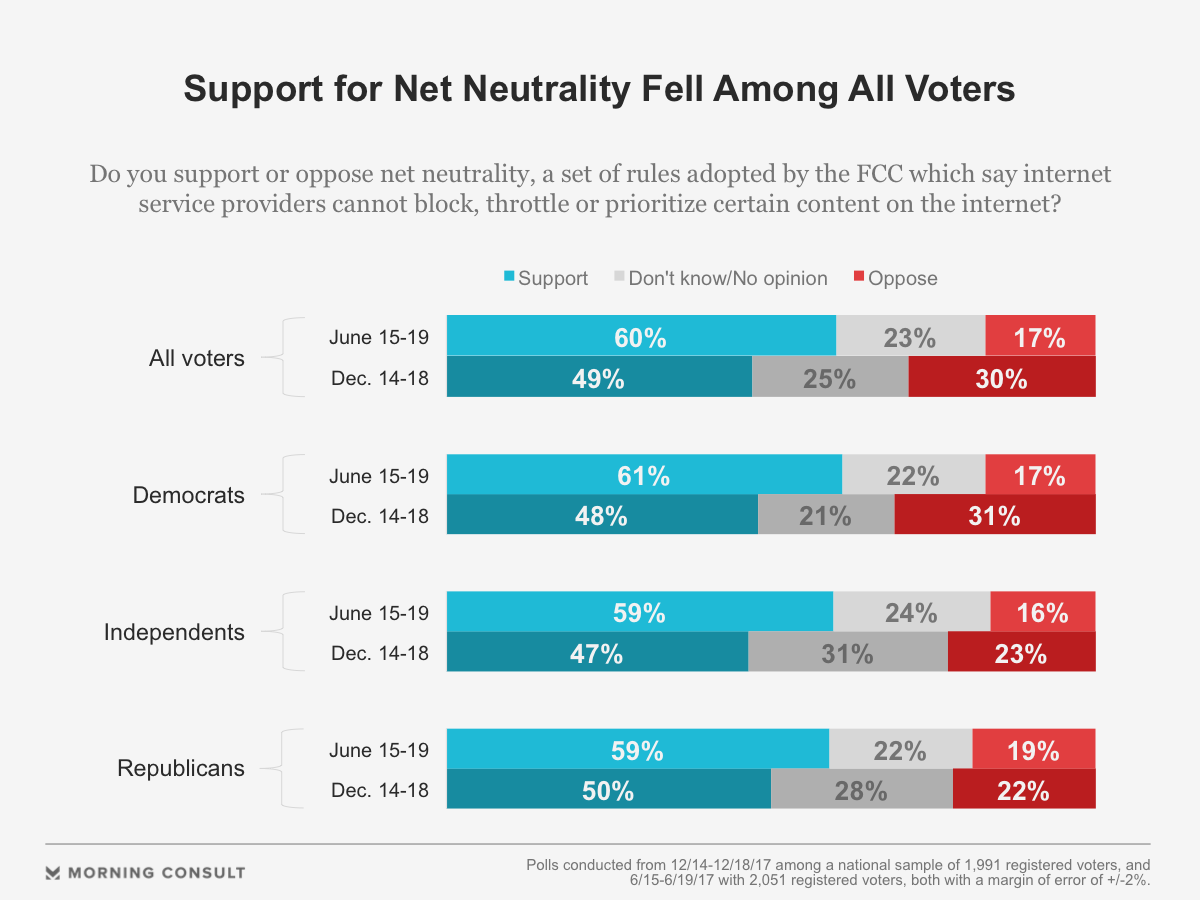 The Dec. 14-18 survey of 1,991 registered voters has a margin of error of plus or minus 2 percentage points.

Voters also expressed concerns about the wider impact of nixing the regulations — 45 percent said it will have a negative effect on consumers, and the same percentage said it will benefit internet service providers.

Respondents were mixed on what impact the FCC’s decision will have on technology companies, such as Netflix Inc. and Reddit Inc. Thirty-five percent of voters said the repeal would help those companies, while 32 percent said it would hurt them.

“Consumers who remember the issue with ISPs throttling Netflix back in 2014 might have renewed concerns about that happening again,” Harold Feld, senior vice president at Public Knowledge, an advocacy group that supports net neutrality rules, said in a Thursday phone interview.

Democrats on Capitol Hill and beyond the Beltway say they’ll fight to protect net neutrality. New York Attorney General Eric Schneiderman (D) recently announced his intention to lead a lawsuit with other state attorneys general to block the FCC from ending the rules.

GOP lawmakers, who are largely supportive of Pai’s decision, are pursuing legislation that would codify certain components of the policy debate. Rep. Marsha Blackburn (R-Tenn.), who leads the House Energy and Commerce Committee’s Communications and Technology subcommittee, introduced legislation on Tuesday that would prohibit ISPs from blocking or throttling online content, but the measure would not prevent paid prioritization or enforce the same regulatory standards as the 2015 Open Internet Order.

Sen. John Thune (R-S.D.), chairman of the Senate Commerce Committee, said this week that he hoped to work with Democratic members of the committee on potential legislation to preserve some parts of net neutrality.

“In order for it to pass over here, it’s got to be bipartisan,” Thune said in a Wednesday interview on Capitol Hill. “So I’ve been talking to some of the Democrats on the committee to gauge their interest level.”