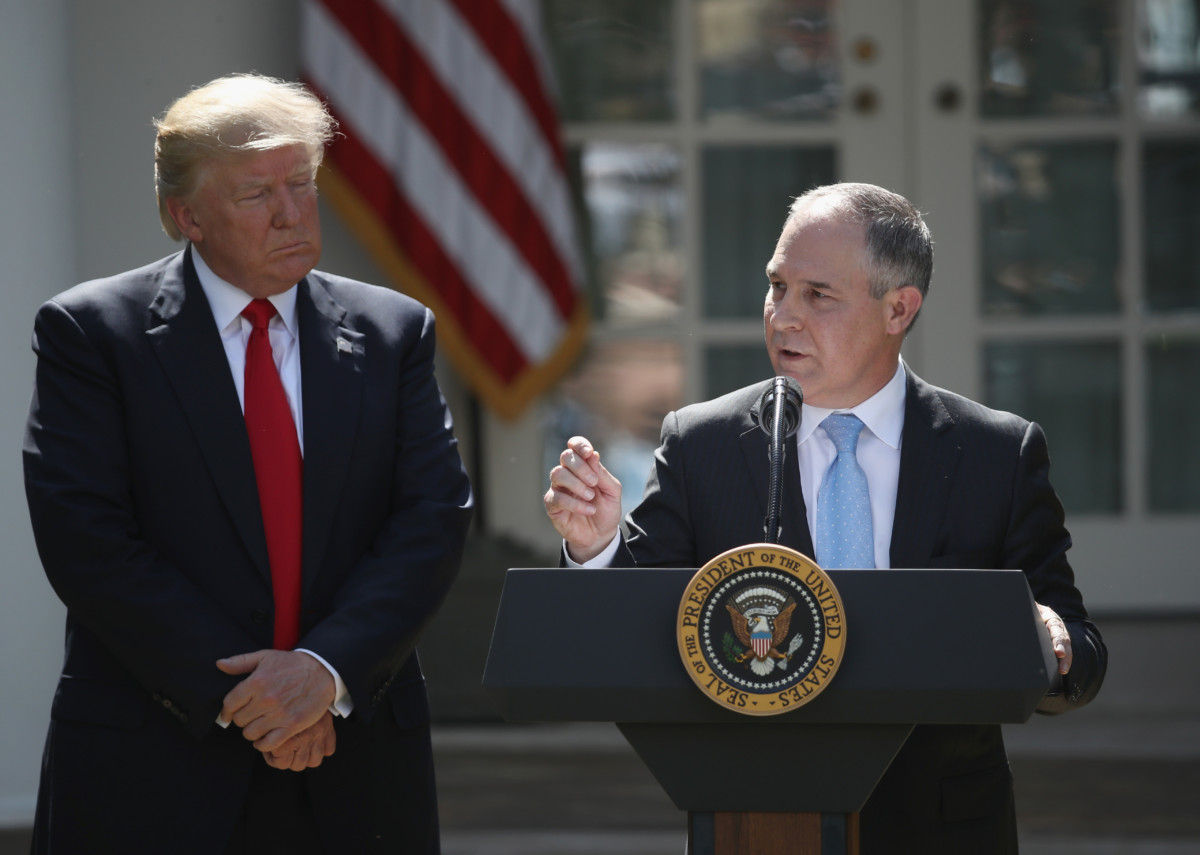 As the Trump administration worked to roll back Obama-era regulations this year, it took aim at ones that affected the energy industry, especially coal miners. And 2018 is likely to see another push to repeal as many regulations as possible before the midterm elections, according to Sarah Ladislaw, director of the Energy and National Security program at the Center for Strategic and International Studies. She said in a phone interview last week that the anti-regulatory drive is expected to continue after the November elections, regardless of the outcome.

• On June 1, President Donald Trump kept a major campaign promise when he announced his intent to pull the United States out of the 2015 Paris climate accord. The official withdrawal won’t take place until 2020, but the policy shift affirmed his administration’s “America First” agenda.

• Trump signed executive orders giving the green light to the Keystone XL and Dakota Access pipelines, which had been blocked by the Obama administration. However, the now-operational Dakota Access pipeline faces several legal challenges, and a recent ruling from Nebraska state regulators on an alternate route for the Keystone XL pipeline further delayed the project’s construction.

• Trump also signed an executive order to slash the size of two national monuments in Utah — Bears Ears and Grand Staircase-Escalante — in the largest reduction of federal land protection in U.S. history. The action, which could open up the Utah land to mining and drilling, set off legal challenges of the president’s authority to reduce national monuments.

• The tax overhaul package passed by Congress this month included a provision that would lift a 40-year-old ban on drilling in the Arctic National Wildlife Refuge. But drilling in the area could be delayed by permit reviews and likely lawsuits.

• Trump initiated the process of repealing climate change-related regulations established by the Obama administration by requesting reviews of the Clean Power Plan and of the five-year oil and gas leasing program that restricted offshore energy development. Efforts to eliminate the rules could take a long time, however, given the success of lawsuits to block the Trump administration’s attempts to delay implementation of certain Obama-era regulations. Vacancies in leadership roles at the Interior Department and the Environmental Protection Agency have also stymied efforts to roll back regulations.

• In March, Trump ordered a review of a rule that restricts methane emissions from oil and natural gas activities on federal land. The Obama-era regulation survived an effort by congressional Republicans to repeal it via the Congressional Review Act, as the resolution failed in the Senate in May. The following month, EPA Administrator Scott Pruitt tried to put off enforcing the rule during the review, but a federal appeals court rejected the proposed two-year delay. In December, the Bureau of Land Management suspended the methane regulation until January 2019, prompting lawsuits from states and environmental groups.

• Despite Trump’s pledge to end “the war on coal” by repealing the regulations that he said have been hampering the industry, such as the Clean Power Plan, the coal industry has continued to struggle in the face of cheaper natural gas and declining demand for coal.

• Trump made another campaign promise to strengthen the Renewable Fuel Standard, which would have stimulated growth in corn-growing and biofuel-producing states. However, proponents of biofuels were disappointed to see that the EPA last month did not increase the levels of biofuels that are federally required to be mixed into the national fuel supply each year.

• The big-ticket items for next year will focus more on trade remedies, sanctions and trade negotiations, Ladislaw said. For example, in January the White House will need to determine whether to impose tariffs on solar panel cells that are manufactured more cheaply in China; later in the year it is expected to consider tariffs on biofuel that’s sold below market price to refineries trying to meet the Renewable Fuel Standard.

• The energy industry is also closely tracking U.S. renegotiations with Canada and Mexico on the North American Free Trade Agreement, and with the South Korea trade agreement — both of which could put energy production priorities at risk. The oil-and-gas industry has relied on the existing trade agreements to transport gas to Mexico and South Korea. “Overall, the administration’s trade agenda is a dagger pointed at the heart of its energy dominance agenda,” David Goldwyn, chairman of the Energy Advisory Group consulting firm, said in a phone interview Wednesday.

• Even though the GOP-led tax code overhaul was signed into law this month, the energy industry expects lawmakers to work on the package introduced by Senate Finance Chairman Orrin Hatch (R-Utah) for energy tax credit extenders and orphan tax credits that were left out of the bill, as well as a renewed push for a comprehensive, bipartisan energy overhaul bill introduced in June by Senate Energy and Natural Resources Committee Chairman Lisa Murkowski (R-Alaska). The measure is awaiting a Senate floor vote.

• The Federal Energy Regulatory Commission is due to rule by Jan. 10 on the Department of Energy’s proposed rule to boost coal and nuclear power plants that keep a 90-day fuel supply on site by requiring utilities to pay a subsidy to those plants.

• Expectations for electric and power projects were raised this year when the Trump touted a $1 trillion infrastructure plan, but so far no action has been taken on that front beyond some hearings in Congress. However, in January the administration is expected to revive its promotion of a plan that would encourage public-private partnerships.