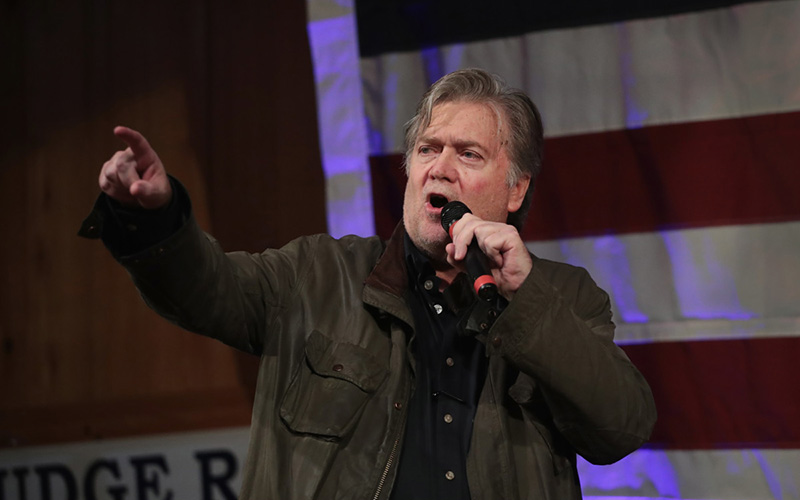 Steve Bannon, former adviser to President Donald Trump and executive chairman of Breitbart News, at a Sept. 25, 2017, campaign rally in Fairhope, Ala. Bannon's approval ratings among Republicans have fallen since comments were attributed to him in a book critical of Trump and members of the Trump's family. (Scott Olson/Getty Images)
By Eli Yokley

The popularity of former White House strategist Steve Bannon had sunk among Republican voters by Tuesday when Breitbart News, the conservative media company, said he was stepping down as its executive chairman.

Bannon’s departure came after President Donald Trump turned his ire on him after he was reported to have made critical comments about the administration and the president’s family in “Fire and Fury: Inside the Trump White House,” a new book by Michael Wolff.

According to a Morning Consult/Politico poll conducted Jan. 4-5, Bannon is viewed unfavorably by a 46 percent plurality of self-identified Republican voters, up 17 points from a Dec. 14-18 survey, when his approval rating was higher than his disapproval rating among Republicans. 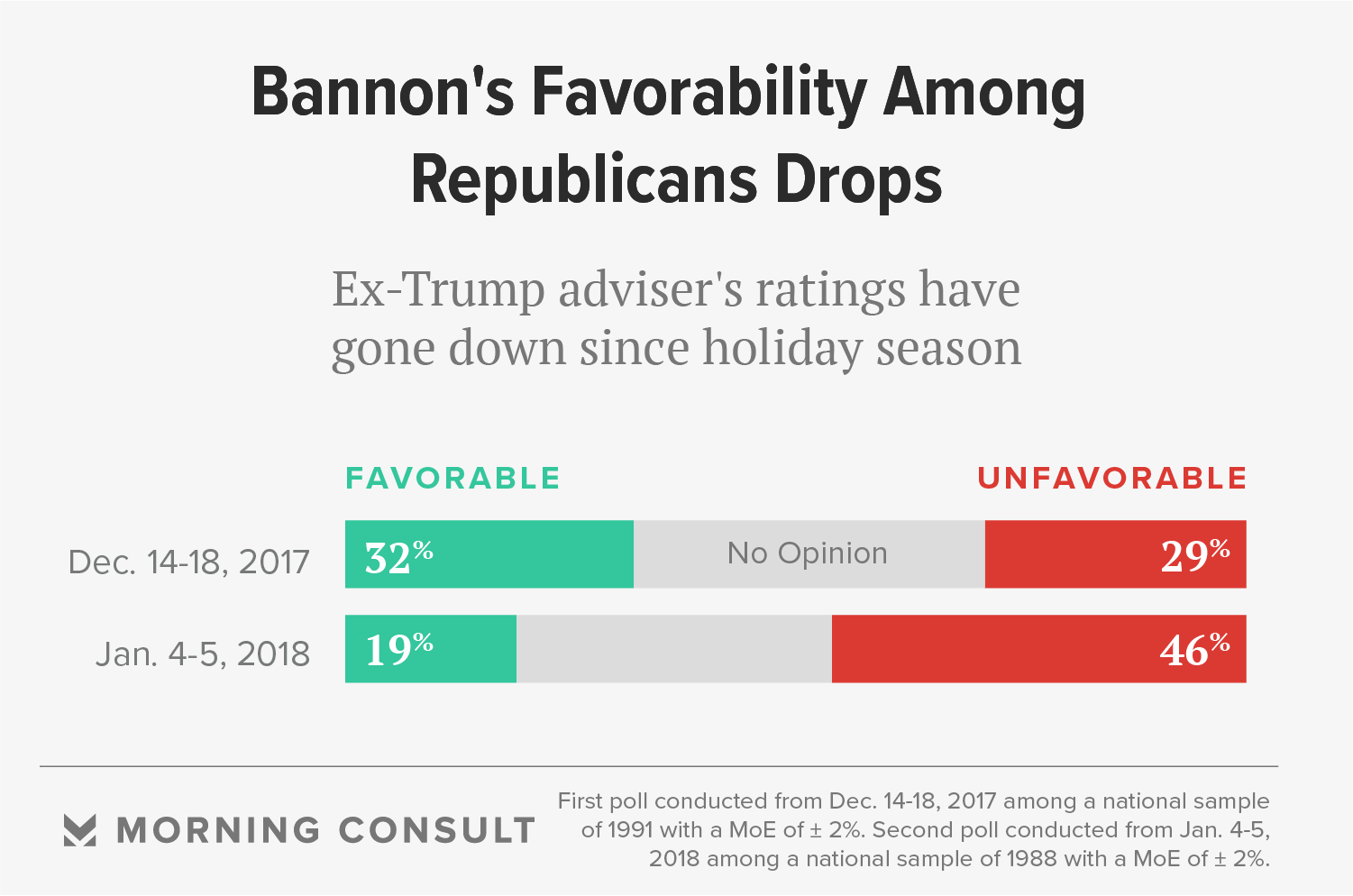 “If you were in the field after the stories about what Bannon supposedly said to Wolff, and given the media attention they have received, I think we would see his negatives rise among Republicans,” Karlyn Bowman, a senior fellow at the American Enterprise Institute who studies public opinion and polls, politics and the media, said in an email Tuesday before Breitbart’s announcement.

On Jan. 3, a day before the Morning Consult survey began, Trump issued a statement criticizing Bannon and disputing his remarks in the book. Trump’s comments were widely covered by the national media.

Kurt Bardella, a former spokesman for Breitbart News who said in a December USA Today opinion piece that he will be joining the Democratic Party, said in an email Monday that the poll “confirms the reality that Steve Bannon has little to no influence over Republicans.”

Even at Breitbart, from which Bardella resigned in March 2016, the audience “congregates on their platform because of the content and a shared world view, not because of Bannon or any other specific figure,” he said.

“The only chance that Bannon has at returning to viability is either Trump forgiving him, a deep-pocket donor investing in him or the ascension of a political figure that Bannon is close with,” said Bardella, currently president of Endeavor Strategies.

Alexandra Preate, chief executive of the public relations firm Capital HQ and who has been Bannon’s spokesperson, did not respond to requests for comment that were made before the Breitbart announcement.

Ed Martin, president of the Eagle Forum Education & Legal Defense Fund, said Tuesday that he worked “side by side” with Bannon when Phyllis Schlafly, a conservative activist who founded Eagle Forum, was supporting Trump’s 2016 campaign. He said that Bannon believes in Trump’s vision and that Republican voters care more about what other Republicans are doing to support Trump’s agenda than what a book says.

After Breitbart announced Bannon’s departure, when asked if there was a chance of a Bannon comeback, Martin said by email, “Of course.”

“There is more to the fight than any one organization,” Martin said. “It takes an army of organizations to help make America great!”

When voters were informed of demands by Trump’s legal team that the publisher halt the book’s release, which ended up being moved up four days to Jan. 5 because of rising interest, 46 percent said the book should not be blocked, while 21 percent said it should.

Bardella said he was not surprised by the lack of knowledge about the book because many Americans just don’t pay attention to politics.

“That is a trap for Washington and also speaks to how Donald Trump became president in the first place,” he said. “Everyone else was having a conversation geared towards the elites and highest common denominator that follows the daily ups-and-downs of D.C. Trump, however, was talking to everybody else who could care less about the beltway and are more concerned with their day-to-day lives.”

Bowman had a similar take.

“Whenever I see a ‘don’t know/no answer’ response that high on a survey, I think we are tapping something that is inside baseball,” she said.

This story has been updated to include a word that was previously omitted from one of Bardella’s quotes, and to identify Preate and her relationship to Bannon.