A plurality of registered voters say Congress should not agree to build a border wall between the United States and Mexico in exchange for extending protections to young people who were brought to the United States illegally when they were children.

The nationwide Morning Consult/Politico poll, conducted Jan. 4-5, comes as a government funding deadline forces the issue of whether to put into law then-President Barack Obama’s Deferred Action for Childhood Arrivals program. President Donald Trump previously rescinded DACA, but he gave lawmakers until March to pass a “fix” to protect the young immigrants, known as Dreamers, from deportation.

Among registered voters, a 46 percent plurality said Congress should not agree to construct a border wall between the United States and Mexico in exchange for protecting Dreamers. Thirty-four percent said Capitol Hill should couple the two issues, and 20 percent said they didn’t know or had no opinion. 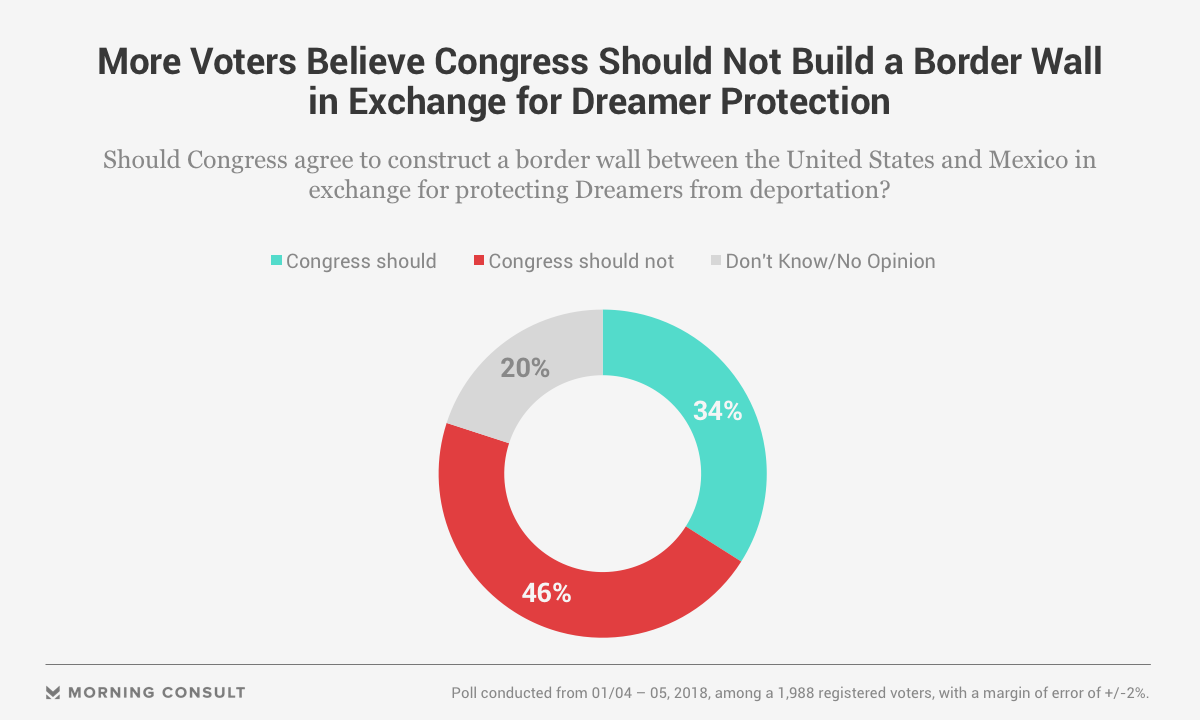 A proposal aimed at reaching a bipartisan compromise is being offered by Reps. Will Hurd (R-Texas) and Pete Aguilar (D-Calif.) as a foundation for discussions. Their plan would couple protections for Dreamers with new technology to secure the border and physical barriers, but it stops short of a full border wall.

“Republicans have said all along they want border security packaged with DACA, and our proposal does that in a bipartisan way,” Aguilar said in an interview Tuesday.

Coupling DACA with a border wall is something that has support from 59 percent of Republican voters.

Trump has said a legislative fix for DACA’s repeal should go together with funding for his proposed border wall. On Tuesday, he met with a bipartisan group of lawmakers at the White House to discuss the matter.

“During the closed-door portion of the meeting, they reached an agreement to negotiate legislation that accomplishes critically needed reforms in four high-priority areas: border security, chain migration, the visa lottery, and the Deferred Action for Childhood Arrivals policy,” the White House said in a statement.

Sen. Dick Durbin (D-Ill.), who attended the meeting, issued a statement after it adjourned. “Republicans laid out their four priorities, and Democrats laid out ours: the Dream Act,” he said. “The next step is for bipartisan negotiators, who have already been working for months, to immediately reach an agreement that can pass both chambers and be signed into law by January 19th.”

“We want to make sure the DACA problem is solved,” the Wisconsin Republican told reporters at a news conference before the White House meeting, which he did not attend. “But as you’ve heard me say time and again, this has to be balanced so we don’t have a DACA problem five, 10 years down the road.”

Among Democratic voters, opposition to coupling a DACA fix with funding for a border wall is stronger than Republican support for it. Sixty-eight percent of Democrats said the two issues should not be combined.

Aguilar, who also didn’t attend the White House meeting, agreed with those who say it is “unfair” to combine the two, but he said Democrats need the support of Republicans to protect Dreamers.

Philip Wolgin, managing director of immigration policy at the left-leaning Center for American Progress, is among those pushing for Congress to pass protections for Dreamers as part of a government spending bill. He said he supports that route “not just because we think this would be easier,” but also because of current DACA recipients who are already losing their protections.

“One of the reasons we believe the DREAM Act should be included in the spending bill is because we know there is going to have to be some compromise,” Wolgin said in an interview Tuesday. “There really is a deal to be had on Dreamers paired with reasonable border security,” he said, noting Hurd and Aguilar’s proposal.

Related: Poll: Trump’s Decision on Dreamers Is a Popular One — Even Among His Base