As President Donald Trump prepares to begin his second year in office, a Morning Consult/Politico survey shows political polarization driving perceptions of his job performance further apart, with a plurality of voters considering his performance a failure.

In a new report card, based on a national survey of 1,988 registered voters conducted Jan. 4-5, a 35-percent plurality of respondents gave the president an “F” grade when asked to think about his performance over the past year in office — roughly double the share of voters (18 percent) who graded Trump’s work an “A.” 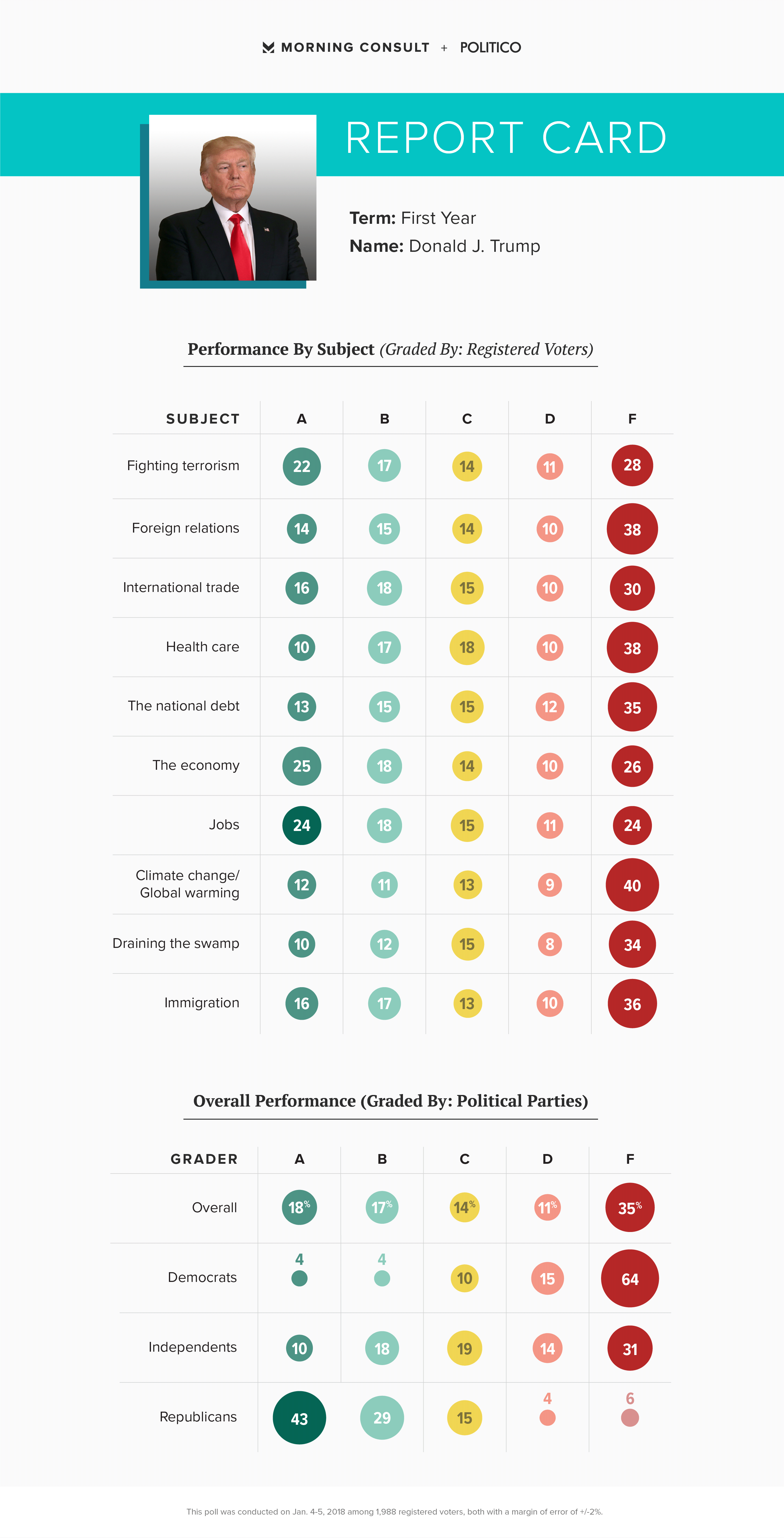 Partisan leanings were a strong factor in how voters graded the work of the president. Trump saw his disapproval ratings significantly rise among Democrats and independents throughout the year, but he has largely maintained the support of the Republican base that helped him clinch the 2016 presidential election.

Fifty-one percent of registered voters disapproved of the president in a Morning Consult/Politico survey earlier this month, compared with 37 percent in a Jan. 20-22, 2017 poll. In the more recent poll, 52 percent of independents disapproved of Trump, compared with 31 percent during the weekend of his inauguration last year. Among Democrats, it was a 13-point jump in disapproval over the same time frame, from 67 percent to 80 percent. Meanwhile, Republicans have remained steadfast in their support: Eighty-three percent approved of him in the Jan. 4-5 survey, compared with 82 percent around the time of his inauguration.

Since mid-April — around the 100-day mark of his presidency, when Morning Consult and Politico first asked voters to assign a letter grade to the president’s performance — Republican voters have become 10 points more likely (from 33 percent to 43 percent) to award Trump an “A” grade. Democrats (from 48 percent to 64 percent) and independents (from 21 percent to 31 percent), meanwhile, have grown more likely to say Trump is failing.

Andrew Gelman, a statistics and political science professor at Columbia University, said that aside from political polarization, the increased support from Republicans could be in part due to Trump’s adoption of GOP orthodoxy on a range of subjects.

“In April 2017 it still seemed possible that Trump would not follow the standard Republican path when it came to policy,” Gelman said in a Jan. 11 email, but since then “he’s been pushing a bunch of traditional Republican positions.”

Trump’s reshaping of the judiciary has been a boon for social conservatives, and some of his more populist, protectionist and isolationist rhetoric from the campaign trail has yet to manifest itself in the policy produced in Washington’s unified Republican government. Trump’s threat to pull out of the North American Free Trade Agreement remains just that. His foreign policy posture has proven more hawkish than many expected. And the lion’s share of benefits from the party’s overhaul of the U.S. tax code — enacted in late December — went to top earners and corporations. 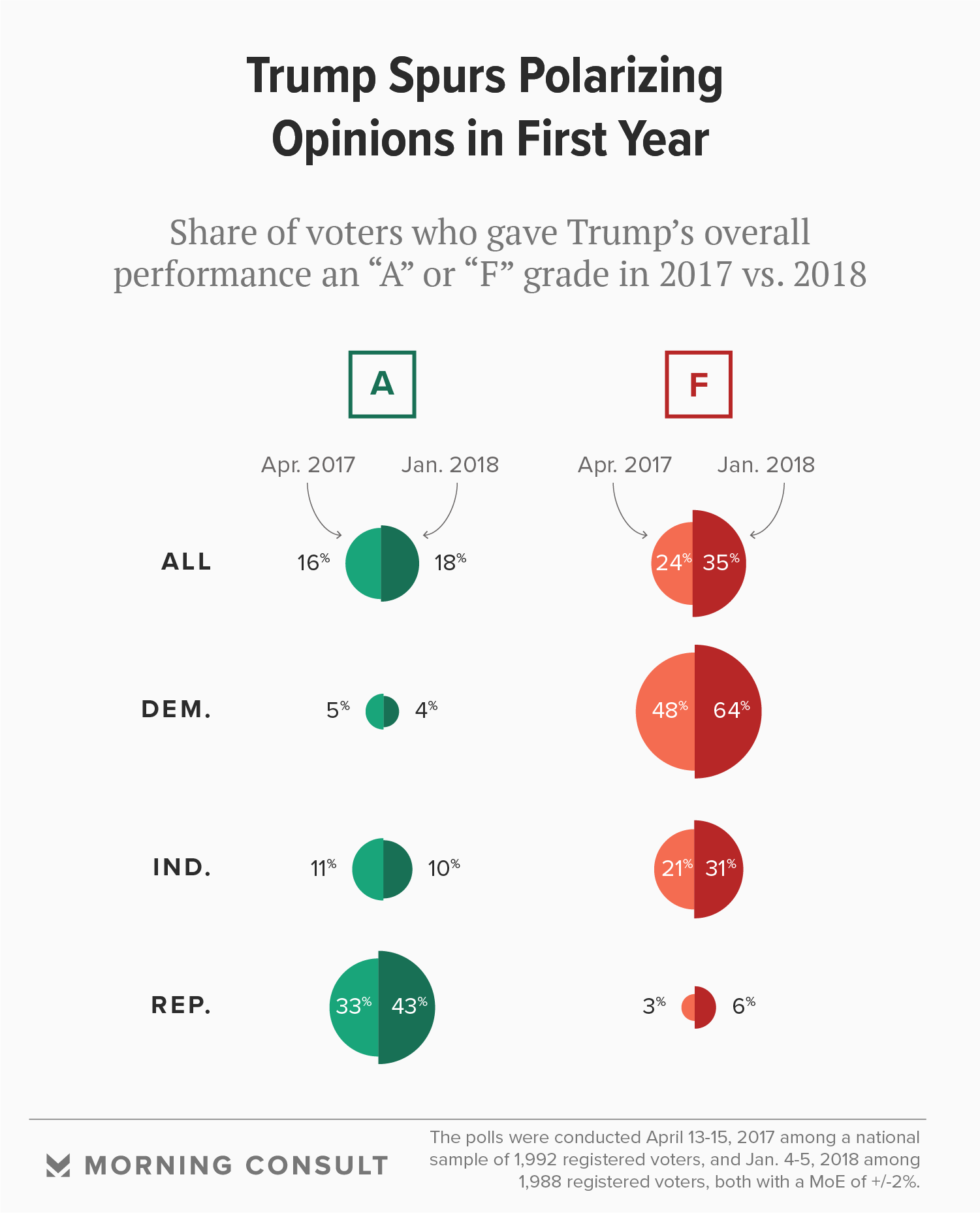 It was a mixed bag for the president in his first year in office. The stock market continued to climb to record highs as the unemployment rate hit its lowest mark since December 2000. And the United States and its allies have continued to make gains against the Islamic State terror group in Syria.

But the Republican Party’s efforts to repeal and replace former President Barack Obama’s signature 2010 health law have not come to fruition, and the tax overhaul has not been particularly popular with voters as a whole. A Morning Consult/Politico survey from Dec. 14-18 found voters split on the tax measure, with 43 percent in favor and 39 percent taking the opposing view. The tax bill was signed into law on Dec. 22.

Voters gave Trump his best grades on the economy and jobs, reflecting those positive economic indicators. The president earned poor marks on climate change, health care, foreign relations, immigration, the national debt and his promise of “draining the swamp.”

With a few exceptions (including on immigration and fighting terrorism), the shift in Trump’s overall performance was mirrored in his grading on individual policy areas: Republicans as a whole were more likely to grant him an “A,” while Democrats and independents were more likely to give him a failing grade.

“It’s like the Republicans and the Democrats are grading two different presidencies,” University of Pennsylvania political science professor Daniel Hopkins said in a Jan. 11 email.