New poll shows many see them as a form of corruption

Despite President Donald Trump’s recent suggestion that earmarks be restored on Capitol Hill, a new poll finds that sort of change could be a tough sell to Americans.

A Morning Consult/Politico poll of registered voters, conducted Jan. 11-16, found that 41 percent of respondents oppose reinstating earmarks, a legislative tool that allows lawmakers to set aside spending to benefit specific recipients, usually in their state or congressional district. Twenty-one percent said they would support the return of earmarks, and 38 percent had no opinion. 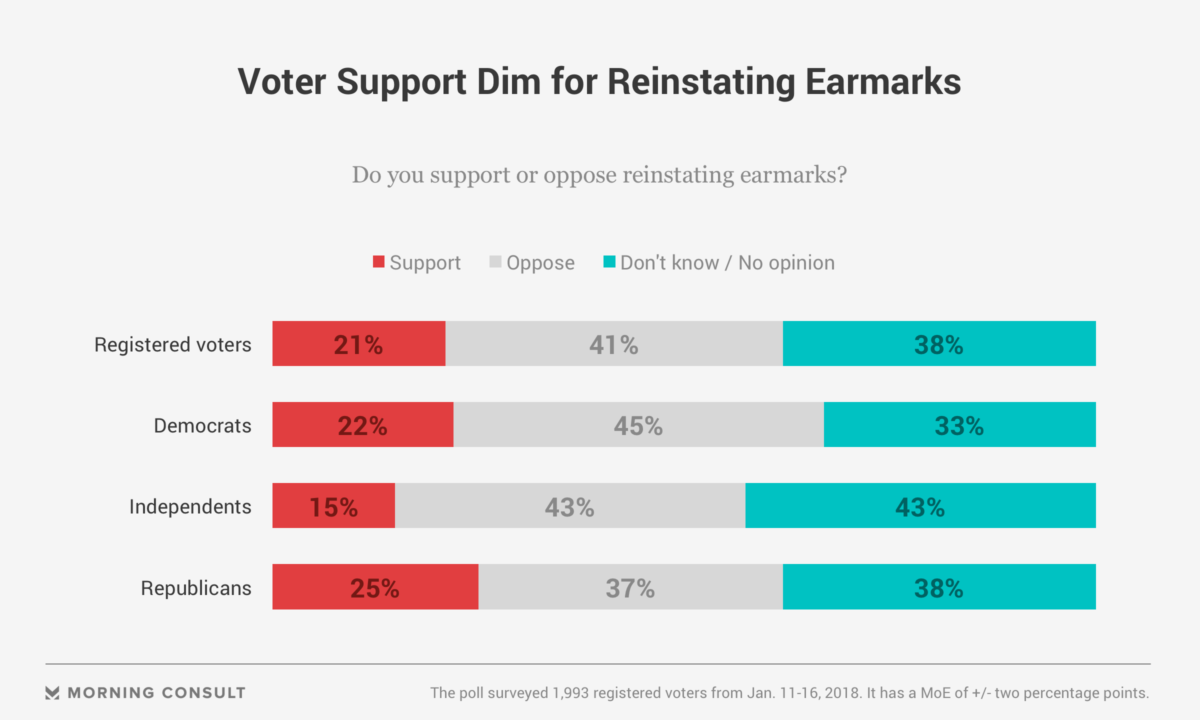 The survey of 1,993 registered voters has a margin of error of plus or minus 2 percentage points and was conducted after a Jan. 9 meeting with lawmakers at the White House when Trump said, “I think you should look at a form of earmarks.” He recalled the “old days” of an earmarks system, “where they all talk about they went out to dinner at night and they all got along, and they passed bills.”

David McIntosh, president of the Club for Growth and a former Republican congressman from Indiana, said there’s no valid reason to support a return to earmarks.

Voters “instinctively know somebody is making out like a bandit” through earmarks, he said in a Wednesday interview. “They get the picture that some lobbying group is giving members of Congress a big fat donation.”

McIntosh, who served in the House from 1995 to 2001, said his group is readying an advertising and lobbying campaign targeting lawmakers who advocate bringing back earmarks.

Rep. Mark Walker (N.C.), chairman of the Republican Study Committee, said at the same hearing that an earmark reinstatement is a political loser for his party. Both parties voluntarily laid off earmarks following the 2010 midterm elections, when Republicans regained control of the House, and any backsliding could threaten the GOP’s majority this November, Walker and McIntosh suggested.

The poll found that reinstating earmarks is opposed by 37 percent of Republicans, with 25 percent in support. On the other side of the aisle, a 45 percent plurality of Democratic voters oppose reviving the legislative tool, compared with 22 percent who support their return.

Overall, voters took a dim view of earmarks. A 45 percent plurality said bringing them back would increase corruption in Congress, while 17 percent said their return would increase bipartisan cooperation on Capitol Hill.

Former Sen. Kit Bond (R-Mo.), who served in the Senate from 1987 to 2011, said earmarks can be “grease for the wheel,” but added that was not their main purpose. Bond – who also served two terms as Missouri’s governor – said elected members of Congress are better-positioned to make spending decisions about their states and districts than “Washington bureaucrats.”

“I think the people of America are so much better served when decisions affecting localities are made by people representing those localities and not somebody east of the Potomac,” Bond, who’s now chairman and partner at Kit Bond Strategies, said Wednesday in a phone interview.