After funding expired, more voters said immigration issue was worth bringing government operations to a halt

Immigration activists rally in support of the Deferred Action for Childhood arrivals program during a protest in Grand Army Plaza in Manhattan, Sept. 5, 2017 (Drew Angerer/Getty Images)
By Eli Yokley

After the government shut down on Saturday, Democrats saw increased voter support for using the spending standoff as leverage to pass legislation that would protect young immigrants who were brought to the United States illegally as children, according to recent Morning Consult/Politico polling.

A nationwide survey found that in the hours leading up to government funding running dry, voters were evenly split at 42 percent when asked whether passing a bill to grant protections to the young immigrants was worth a shutdown. After federal agencies began furloughing non-essential employees, more Americans sided with Democratic lawmakers – 47 percent to 38 percent – when asked the same immigration question in a Jan. 20-21 poll.

On Monday, Senate Democrats who had been pushing for a legislative fix to the planned end of the Deferred Action for Childhood Arrivals program on March 5, backed down, for now. They allowed the government to reopen after Senate Majority Leader Mitch McConnell (R-Ky.) agreed to hold a vote at a later date on legislation aimed at protecting so-called Dreamers.

Michael Steel, who served as press secretary for now-former House Speaker John Boehner (R-Ohio) and is now a managing director at Hamilton Place Strategies, described the overnight shift in public opinion as “some sort of partisan rah-rah team feeling.” He spoke by phone after senators reached an agreement to vote on government funding legislation.

Indeed, support for using the Dreamers issue as shutdown leverage increased among Democratic voters. In the first survey, conducted Jan. 18-19, they supported the approach — 59 percent to 30 percent. The second poll showed Democratic backing for the strategy had climbed to 65 percent, with 23 percent opposing it.

Support also rose among independents, from 35 percent to 42 percent, while opposition fell, from 43 percent in the first poll to 39 percent in the second one. Among Republicans, 29 percent said the first time around that the immigration issue was important enough to shut down the government, with 31 saying the same in the second poll. 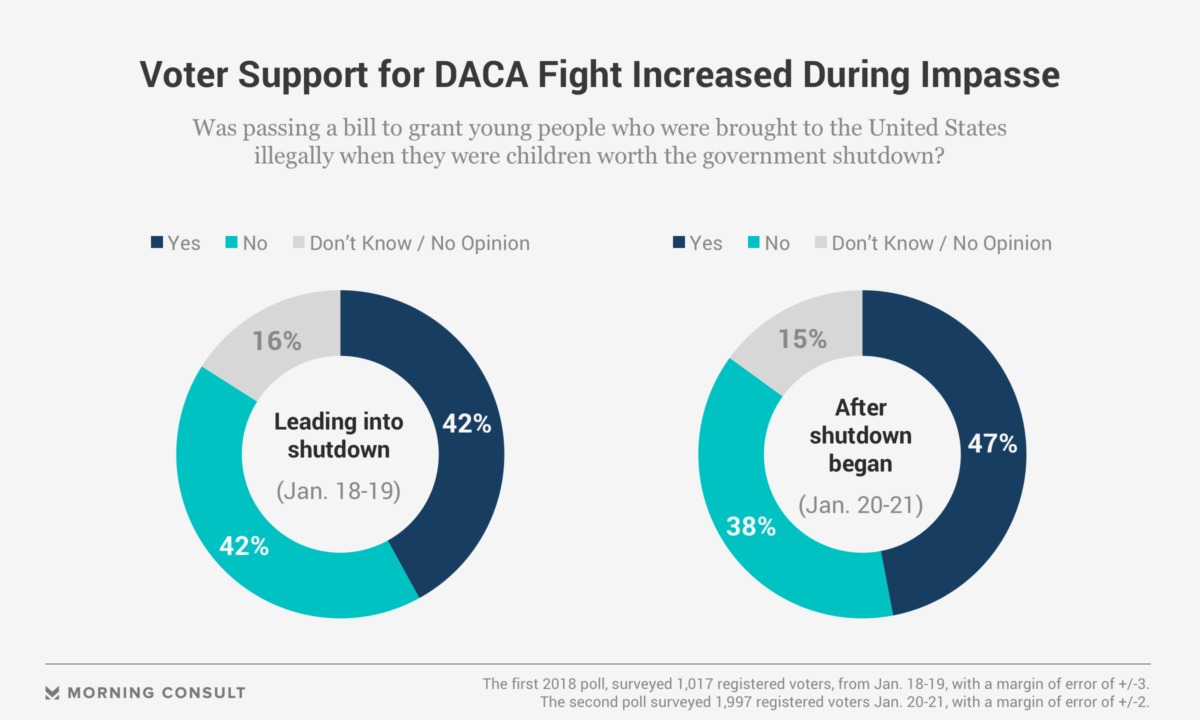 “If you’re trying to explain why it’s important to shut the government down, you have a pretty good explanation,” said Adam Jentleson, deputy chief of staff to former Sen. Harry Reid (D-Nev.), noting the Democratic case for Dreamers.

The latest poll also found that 35 percent of voters blamed congressional Democrats for the shutdown, followed by 34 percent pointing the finger at President Donald Trump and 15 percent blaming Republican lawmakers. Fifty-three percent said Trump did not do enough to avoid the shutdown, while 29 percent said he did enough to try and find a bipartisan solution.

The poll, which surveyed 1,997 registered voters, had a margin of error of plus or minus 2 percentage points.