Walmart vs. Target: A Political Divide Among Shoppers

Walmart is more popular among Republicans, while more Democrats see Target in a favorable light

When it comes to consumer preferences between Wal-mart Stores Inc. and Target Corp., party doesn’t matter: Most people choose Walmart, regardless of their political leanings. But Walmart is more popular among Republican shoppers, while Target does better with Democrats, according to Morning Consult’s Most Polarizing Brands in America data.

The data, which is based on more than 17,000 U.S. consumer surveys about each company from October through December, shows Walmart’s favorability leans Republican by 14 points, with a 69 percent net favorability, compared to 55 among Democrats.

Target’s favorability, on the other hand, leans Democratic, by 18 points, with 71 percent net favorability compared to 53 percent among Republicans. 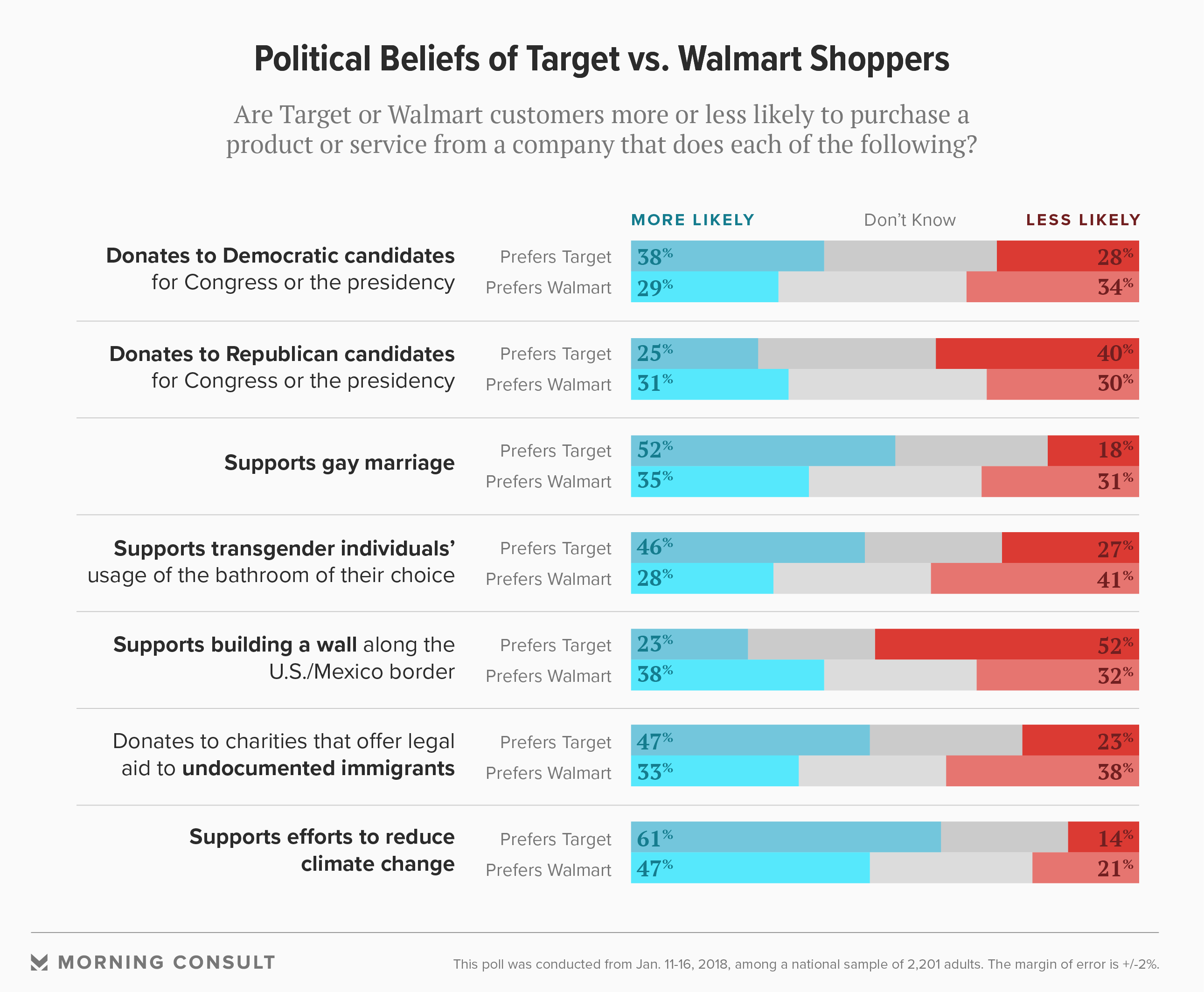 The differences between the two groups of consumers are attributable to the locations of the companies’ stores and the demographics of their headquarters’ locations, according to Neil Howe, managing director of demography at the risk management firm Hedgeye and president of Saeculum Research, a trend forecaster.

“Walmart has a certain clientele: Their center of gravity compared to Target is a bit lower income, a bit more rural, a bit more red zone culturally, and a bit older” — and that demographic tends to vote Republican, Howe said in a Jan. 17 interview.

Walmart is based in Bentonville, Ark., whose county voted 62.9 percent in favor of President Donald Trump in 2016. The company had 4,752 Walmart stores in the United States as of Oct. 31, with a heavy presence in red states and rural areas. Target, which currently has 1,834 U.S. stores, is based in Minneapolis, where the majority of precincts chose Democratic presidential nominee Hillary Clinton in the 2016 election.

Stef Woods, an American University professor who studies behavior, culture and marketing, said in a Jan. 17 phone interview that Target stores are primarily located in metropolitan areas, which tend to lean Democratic.

Howe said that Target has also “always polled very well in brand attractiveness for millennials,” who tend to vote Democratic while they’re young.

In a separate Morning Consult poll of 2,201 adults, conducted Jan. 11-16, consumers who said they prefer Target were more likely to back progressive political stances, while Walmart customers were less staunch in comparison on conservative positions.

Forty-one percent of those who prefer Walmart said they would be less likely to buy from a company with such a policy, compared to 28 percent who said it would make them more likely to make a purchase, while 30 percent said they did not have an opinion.

Consumers choose Walmart because it is a community staple, according to Howe. Walmart, which employs 1.5 million people across the country, earned the third-highest positive ranking in Morning Consult’s Community Impact Rankings. Target ranked 11th. The company has 323,000 employees worldwide but doesn’t specify the number of U.S. workers.

Walmart was the largest U.S. retailer by sales in the National Retail Federation’s 2017 rankings, while Target was No. 8.

Walmart has been criticized for entering local economies and pushing out local stores, Howe said. But because the company has a strong presence in rural areas in a way Target and large e-commerce companies such as Amazon.com Inc. do not, he said consumers have been viewing Walmart more favorably over the past five or six years because people trust the retailer to be there “when the chips are down,” like during emergencies and natural disasters.

Though Democrats view Target in a more favorable light, at the end of the day, shopping habits revolve around price and access, followed by political leanings second, said Woods, the American University professor.

“If all else is relatively equal in terms of cost and convenience, you might choose to support companies that have similar political leanings that you do,” she said. “But that would be a separate decision: If you can save dramatically on an item, would you still adhere towards how workers should be treated, or ask is a minimum wage a livable wage? That’s a separate discussion.”