Voters most want President Donald Trump to focus on improving the health care system, economy and creating jobs during his first State of the Union address Tuesday night, according to a new Morning Consult/Politico poll. 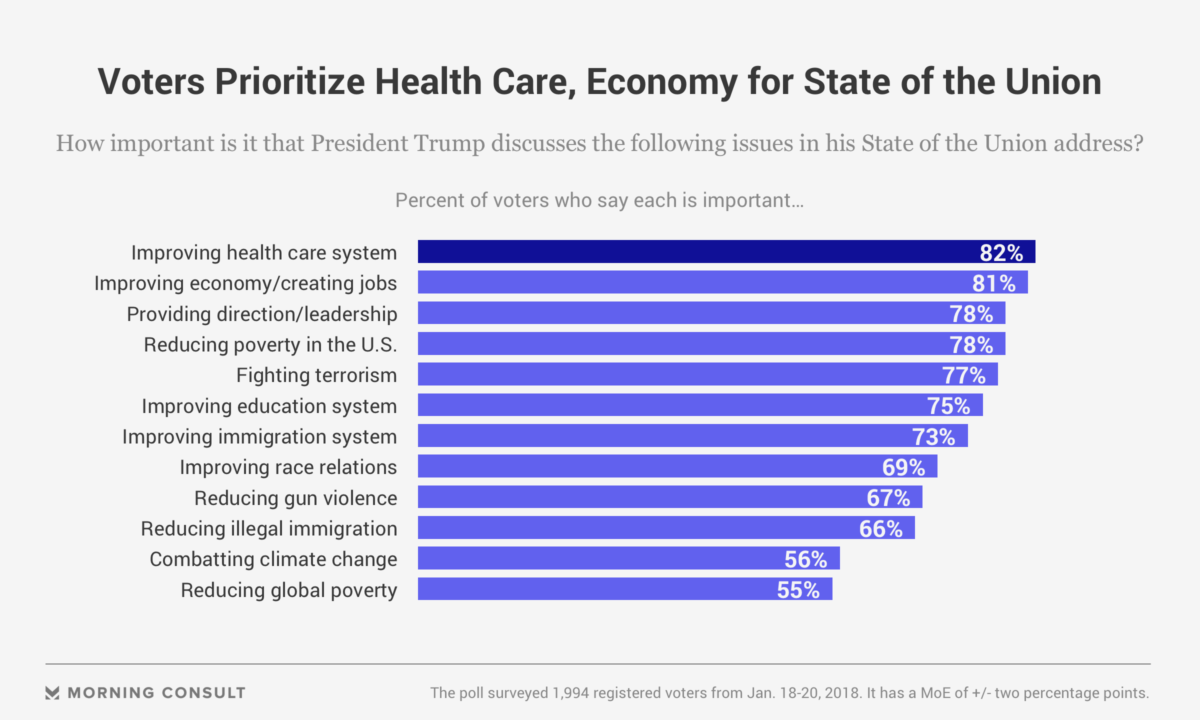 But some current events – the upcoming Feb. 8 deadline to fund the government or the politically fraught fight in Congress over immigration policy – could force the president’s hand regarding speech topics.

“If we were facing that deadline, less than two weeks out, we would discuss that pretty quickly right at the top,” said Cody Keenan, senior adviser and director of speechwriting for then-President Barack Obama, in a Wednesday phone interview.

Keenan, who was Obama’s chief speechwriter for most of his second term, said he would not focus the entirety of the address on earning votes in the room from lawmakers. Instead, Keenan said, it would be most effective to consider those watching at home – the “single biggest audience” a president gets a year. Twenty-eight percent of poll respondents said they were very likely to watch, while 24 percent said they were somewhat likely to watch.

Since Obama’s final State of the Union address, the share of voters saying it is important to focus on improving the health care system in the speech has risen 6 percentage points, from 76 percent in a Morning Consult poll conducted Jan. 8-10, 2016. Eighty-six percent of voters in the 2016 survey said the president should focus on improving the economy – 5 points higher than the subject ranked this year.

“With the tax reform package that passed and the fact that the stock market is doing so well, people are feeling pretty good,” said Ron Bonjean, a Republican strategist and co-founder and partner at Rokk Solutions, in a phone interview Wednesday. “The health care costs rising is a cause of concern.”

Bonjean, who helped lead the communications strategy for Neil Gorsuch’s successful Supreme Court confirmation last year, said he expects Trump to tout good news – the economy’s performance and the loss of territory for the Islamic State in the Middle East – as well as threats, such as North Korea.

Bonjean said he also anticipates immigration to be a “pretty big deal” in the speech, though he added he thinks Trump will save controversial jabs for his return to the White House or Twitter.

“I think he’ll feed red meat to the base once he’s finished,” Bonjean said. 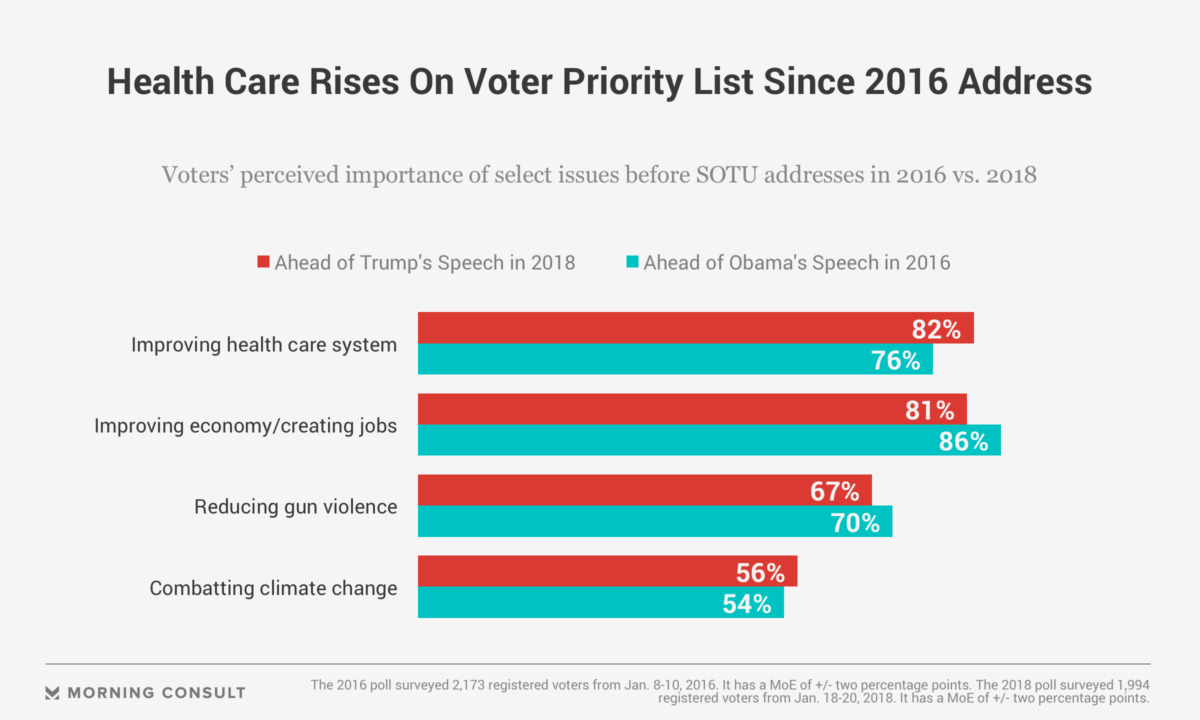 For voters, improving the immigration system ranks in the middle among other priorities for the speech. The issue, specifically the Deferred Action for Childhood Arrivals program, played a central role in the Jan. 20-22 government shutdown. Seventy-three percent of voters said improving the immigration system was a very important priority or somewhat important priority for the speech, and 66 percent said reducing illegal immigration was very important or somewhat important for the president to address.

Trump delivered a joint address to Congress on Feb. 28, 2017 — though it was not technically a State of the Union speech. Just prior to that speech, trust in congressional Republicans’ handling of the issue of immigration stood at 45 percent, according to a Feb. 24-26 Morning Consult/Politico poll. Forty percent of registered voters in the new poll said they trust congressional Republicans to handle the issue.

Immigration is a higher priority for Republican voters, 86 percent of whom said reducing illegal immigration was very important or somewhat important to address. Among surveyed Democrats, the top priority was reducing poverty in the United States, which 81 percent said was important to discuss in the State of the Union, followed by health care, with 80 percent.

Other issues, such as climate change, rank lower on voters’ priority list for Trump’s first State of the Union address: Fifty-six percent of voters said the issue was important to discuss in the speech – 1 percentage point above reducing global poverty.

Keenan, in a Wednesday email, said climate change was viewed similarly by voters in Obama’s polling. Obama featured it prominently, anyway, Keenan added, because part of “any good speech” and “leadership itself” is “identifying a challenge worth taking on and explaining why and how, especially if the audience is skeptical.”