With grants set to expire at the end of March, health center executives warn of cuts to staff and services 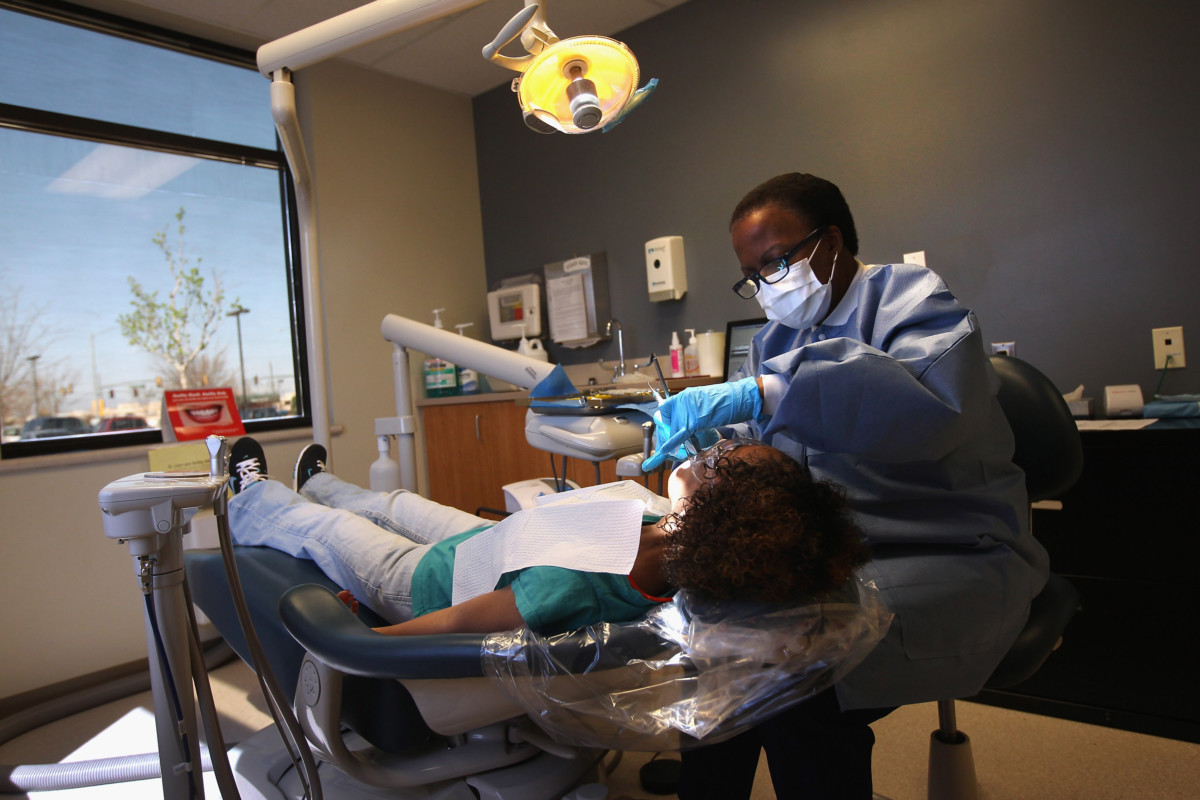 A dental hygienist cleans a patient's teeth at a community health center in Aurora, Colo., in 2012. Centers like these are waiting on Congress to renew federal grants, which are set to expire in March. (Photo by John Moore/Getty Images)
By Jon Reid

Health centers that provide essential medical care for millions of poor and uninsured patients are preparing to lay off staff and shrink services amid fears that they will run out of money before Congress renews funding that expired in September.

The federal Health Center Program has nearly 1,400 community health centers, which treat about 25 million Americans who reside in underserved communities across the country. These centers serve as a one-stop shop where patients can get primary care, mental health care, dental care and other services, regardless of their ability to pay.

About 70 percent of the $5.1 billion in grant funding the centers received collectively in fiscal year 2017 came from the Community Health Center Fund, which expired in September. A short-term patch of $550 million that Congress passed in December is set to expire at the end of March.

The funding cutbacks come during the worst flu season in recent history and in the middle of a national opioid crisis.

“If the cut actually happens, then it’s Armageddon,” said Sara Rosenbaum, a professor of health law and policy at George Washington University, in a Wednesday phone interview. “But just the uncertainty is causing widespread problems.”

Even though most health centers will not exhaust their federal funds until the end of March, officials at these centers are already anticipating the worst.

“There’s a lot of anxiety in our workforce,” Salud Family Health Centers CEO John Santistevan said in a phone interview Wednesday. “Because if that funding doesn’t get renewed we’d have to lay off a significant number of staff members.”

Salud Family Health Centers operates 13 clinics in underserved communities in northeastern Colorado. Of Salud’s 650 employees, Santistevan estimates he would have to lay off about 150 workers if the grant funding is not renewed this spring.

Patient access to care would also be restricted, he said. “In the last year we saw 76,600 patients,” he said. “We’d have to reduce that by 25,000 patients if the funding wasn’t renewed.”

Approximately 20 percent of health centers have already instituted a hiring freeze, and 53 percent are considering staff layoffs, according to a KFF survey released Thursday. Some centers have already had to lay off staff, cancel investments — such as purchases of medical equipment — and reduce operating hours, said Rosenbaum.

The uncertainty has also made it harder for health centers to hire physicians, who are already in short supply.

“We’re all competing nationally for a small pool of physicians in family practice,” Santistevan said. “It’s pretty difficult to try to recruit somebody when they bring up the question, ‘Are you guys going to be here in a couple months?'”

Some community health center advocates see next week’s spending negotiations in Congress as the best opportunity to get a long-term funding extension for the grants, since the short-term funding does not expire until the following month.

Health center executives from across the country plan to be on Capitol Hill Feb. 6 to take their case to lawmakers directly, in an effort to ensure the centers’ funding lapse doesn’t get overshadowed by high-profile fights such as resolving the status of Deferred Action for Childhood Arrivals recipients.

Related: Post-Acute Care Providers Upset Over Being Left Out of Bundled-Payment Test Program

A cause for concern in this effort is that grant funding for community health centers has been decoupled from the fight to fund the Children’s Health Insurance Program, which in January received a six-year funding extension. In 2013, the two programs had their funding renewed in a single legislative package.

Anita Monoian, chief executive of Yakima Neighborhood Health Services in Washington state, said if Congress fails to renew the grant funding this spring, she will have to lay off 20 to 30 of her almost 300 workers and treat fewer patients.

“We have 50-plus years of good bipartisan support,” Monoian, who plans to be on Capitol Hill Tuesday, said in a Wednesday interview. “I have not personally heard a single congressman from either side of the aisle speak out against this. I think it’s more a matter of lack of awareness.”

House Energy and Commerce Committee Chairman Greg Walden (R-Ore.) said by email Thursday that health care centers deserve multi-year funding. “I will use every tool at my disposal to get swiftly these critical health care services the money they need,” he said.