38% in poll say his public health emergency order has been sufficient; 36% say it's not enough to combat crisis 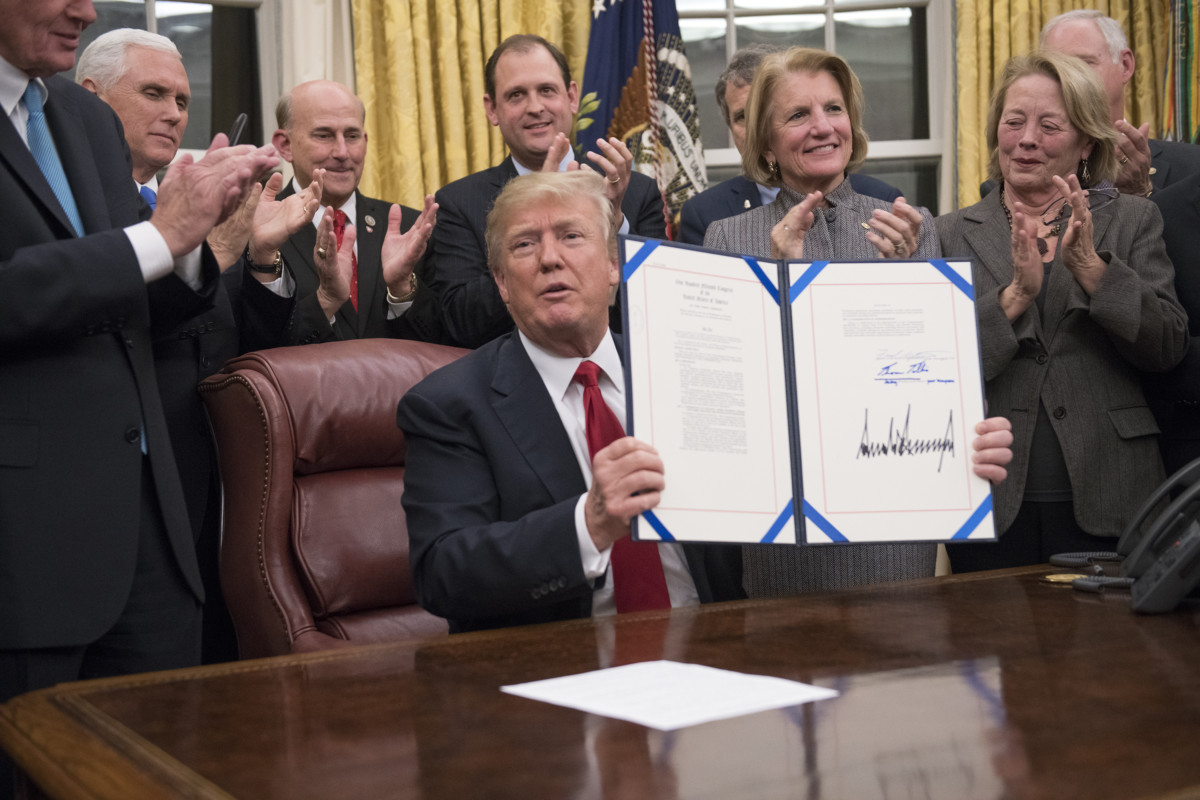 President Donald Trump signed a bipartisan bill to stop the flow of opioids into the United States on Jan. 10, 2018. (Photo by Ron Sachs-Pool/Getty Images)
By Jon Reid

Since President Donald Trump declared the opioid crisis a public health emergency in October, he has drawn fierce criticism from health experts and Democratic lawmakers who say he has done little to stem overdose deaths and rising addiction rates.

But in a Morning Consult/Politico poll of 1,985 registered voters, conducted Feb. 1-4, respondents are split over whether Trump’s initial public health emergency declaration, an action that allows federal agencies to more quickly hire addiction specialists and redirect existing funds to respond to the crisis, is an adequate response to the opioid epidemic.

Thirty-eight percent of all respondents said Trump has done a sufficient amount to address the crisis, while 36 percent said his response has been insufficient. Twenty-six percent of voters said they do not know or have no opinion. The survey has a margin of error of plus or minus 2 percentage points. 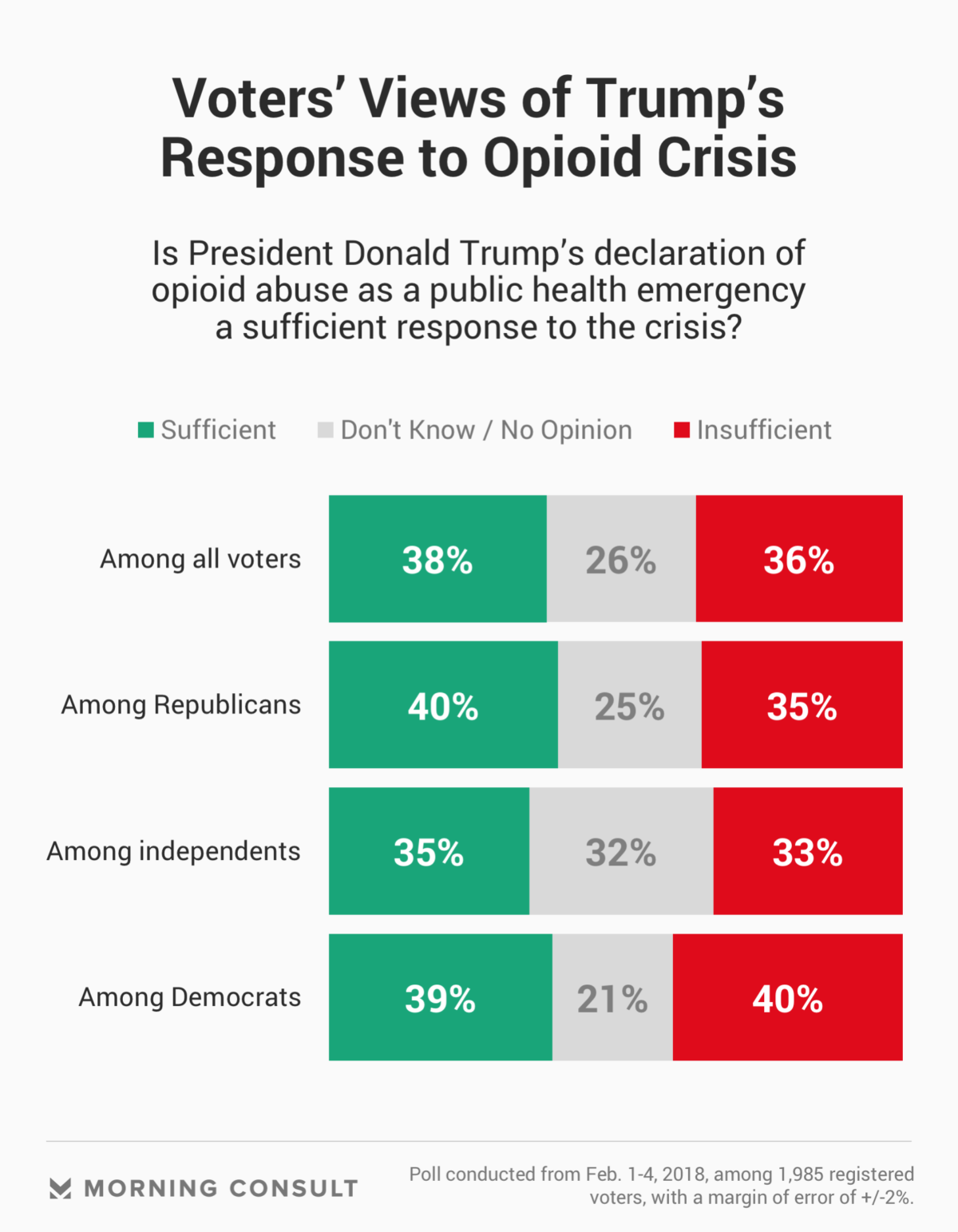 On Jan. 10, Trump signed a bipartisan bill, H.R. 2142, to increase the number of chemical screening devices available for border agents to detect synthetic opioids such as fentanyl that are being trafficked into the country, and on Jan. 24, the administration extended the public health emergency for the opioid crisis another 90 days.

But public health experts and Democrats say the declaration is inadequate because it does not approve any new funds to combat the crisis.

“It’s kind of like pointing at a burning building and then not calling the fire department and watching it burn to the ground,” Andrew Kolodny, a drug abuse expert at Brandeis University, said in a Friday phone interview.

In addition to declaring a public health emergency on opioids, Trump formed the President’s Commission on Combating Drug Addiction and the Opioid Crisis via executive order in March. In November, the commission released 56 recommendations to address the crisis. So far, the administration has failed to implement many of the commission’s proposals, and Trump has not called for any additional federal funding for the issue.

“Recommendations and declarations on their own don’t save lives,” Lindsey Vuolo, associate director of health law and policy at the National Center on Addiction and Substance Abuse, said in a Monday phone interview. “They need to be supported by some type of action.”

Broken down by political party, 77 percent of Democrats, as well as 65 percent of independents and Republicans said they support more funding to address opioid abuse.

Treatment and public health experts say the opioid abuse epidemic continues to worsen in the United States, despite national attention to the crisis.

“In the 20-year conflict in Vietnam we lost 44,000 Americans,” Kolodny said. “We’re losing that number every year from opioids.”

Half of the survey respondents said they consider opioid abuse to be a major problem in the area where they live. By contrast, 24 percent of those surveyed said it is a minor problem where they live and 8 percent said it is not an issue locally for them.

A 41 percent plurality of registered voters said they expect opioid abuse in the United States to get worse in the next five years, while 24 percent said they expect the situation to stay about the same. That’s compared to 20 percent of voters who said the opioid crisis would likely get better in the next five years. Fifteen percent of those surveyed said they do not know or have no opinion.

Asked to respond to criticism of the president’s response to opioids, White House deputy press secretary Hogan Gidley said in an emailed statement Monday that “Trump has prioritized this issue by declaring the opioid crisis a nationwide public health emergency.”

“We will continue discussions with Congress on the appropriate level of funding needed to address this crisis,” Gidley said.