Trump Makes Gains Ahead of Midterms but Risks Remain for GOP

After losing voter support in every state during his first nine months in office, President Donald Trump is beginning the second year of his term with his popularity on the upswing.

While Trump’s net approval rating remained 7 points underwater in January — with 44 percent of registered voters approving of his job performance and 51 percent disapproving — the number represents a 2-point bump compared with his rating in September and a 4-point bump from October and November.

Much of that gain was driven by an increase of enthusiastic support from Republican voters: Forty-eight percent of those voters in January said they strongly approve of Trump, compared with 43 percent in September.

Some experts suggest Trump’s improved standing with the public, and Republican voters in particular, was partly due to rosy economic indicators during this period — from stock market gains to strong employment figures — and Republican lawmakers’ overhaul of the country’s tax code, despite the public’s mixed response to certain parts of the legislation. 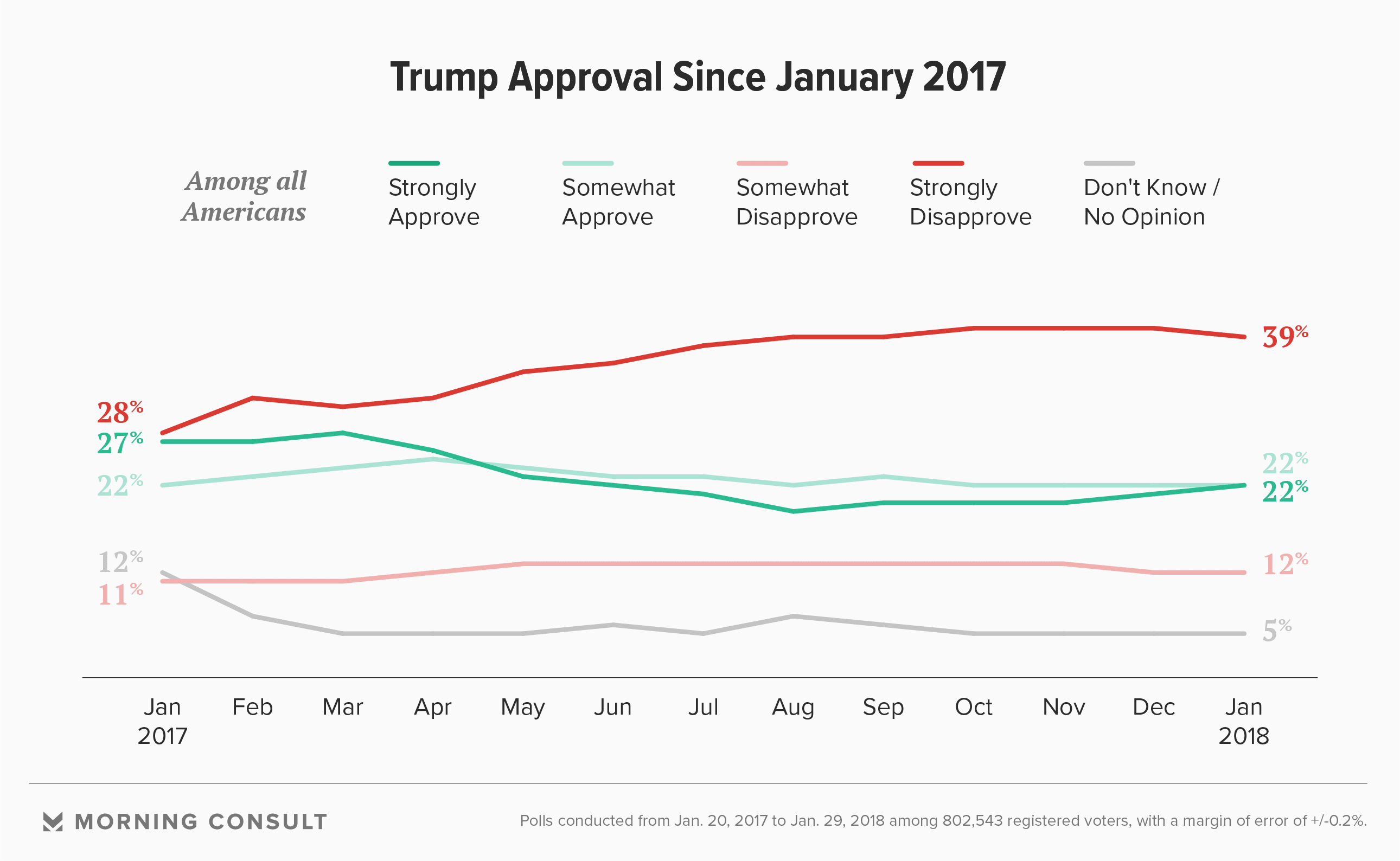 The improvement in Trump’s approval rating since the fall “most fundamentally reflects the economy,” Allan Lichtman, a political historian at American University, said in a Feb. 4 interview. A secondary factor is that Trump “did finally get something done in Congress with the tax bill.”

Daniel Hopkins, a political science professor at the University of Pennsylvania, said the passage of the tax bill has eased GOP voters’ concerns “that the Trump administration wouldn’t be able to advance a traditional GOP agenda.”

“Any lingering worry that Trump wouldn’t be loyal to the GOP’s priorities is likely to be history,” he said in a Feb. 5 email.

“I don’t think there’s much that can happen between now and November that’s going to dampen the enthusiasm of the anti-Trump vote,” he said.

Eric Ostermeier, a research fellow at the University of Minnesota’s Humphrey School of Public Affairs, said in a Feb. 5 email that Trump’s numbers are “still dangerously low” nine months out from the midterm, a time when voters historically have tended to cast their ballots against the governing status quo.

“Any momentum he might be experiencing now could easily be derailed by a downturn in the economic and financial indicators on which he has hung his hat,” he said. 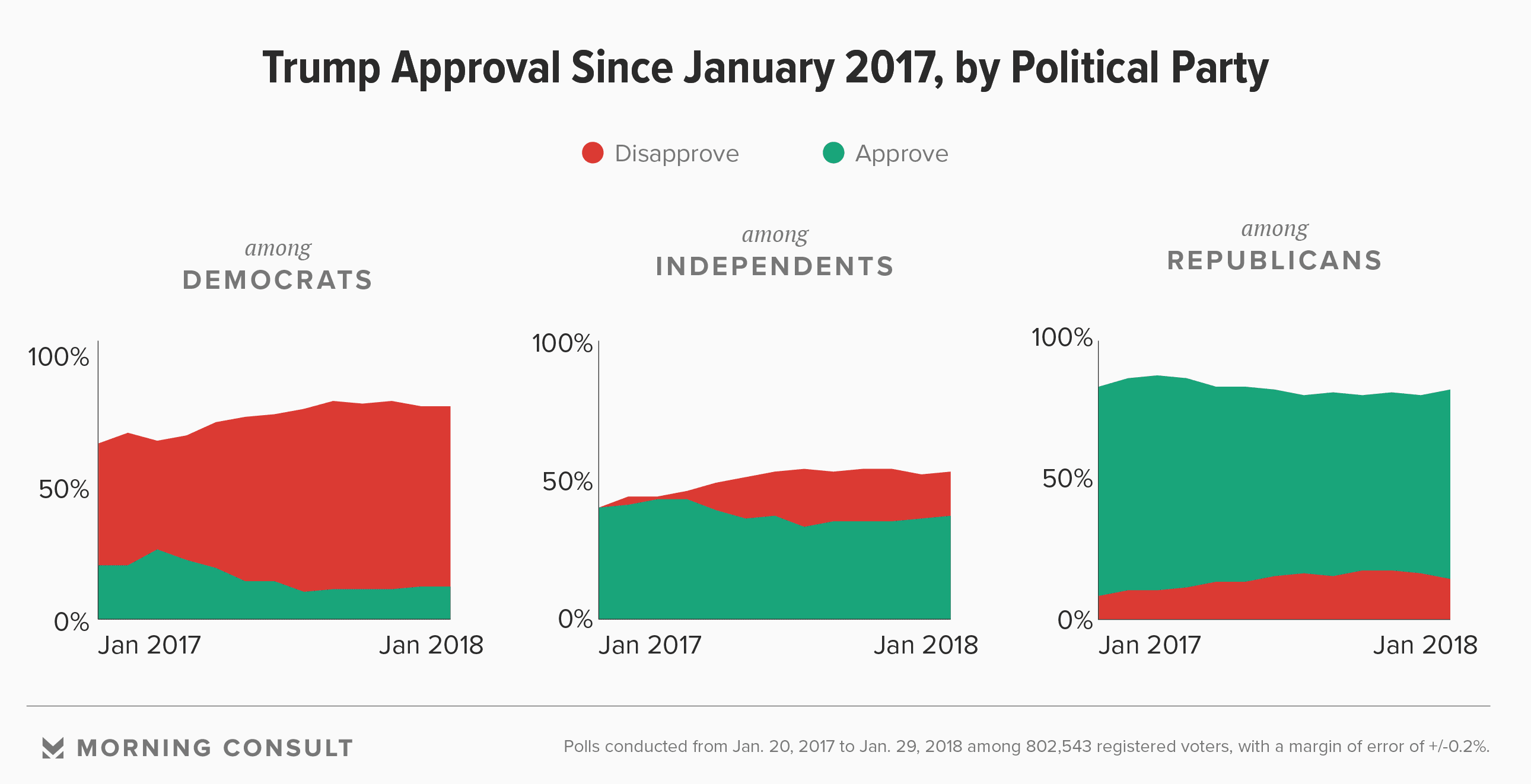 Asked how the GOP plans to maintain its control of both chambers, Republican National Committee press secretary Cassie Smedile noted the public’s improving perceptions of the tax bill and the RNC’s fundraising advantage over the Democratic National Committee. Federal Election Commission data shows the RNC outraised the DNC by a roughly 2-to-1 margin in 2017 and the first month of 2018, and it has approximately six times as much cash on hand as its Democratic counterpart.

“American people like Republican policies and – even better – they believe that we are the Party that is fighting for them,” she said in a Feb. 8 email. “Our fundraising advantage combined with our permanent, data-driven field program puts us in prime position to defend our majorities and continue our fight for the American people.”

The president has improved his net rating in 20 states since the most recent data from Morning Consult’s previous release in October, which included data from Trump’s Jan. 20, 2017, inauguration to Sept. 26. In eight states, voters have soured on him.

For Senate Republicans, the new data points to some cause for optimism as they seek to build on their 51-49 majority in the chamber by protecting seats in two Western states and targeting Democratic incumbents in 10 states Trump carried in 2016.

Trump has improved on his standing in Nevada (+7 percentage points) and Arizona (+3 points), two states Senate Democrats consider ripe targets. In January, Nevada voters were split on Trump’s job performance ahead of Republican Sen. Dean Heller’s re-election run; in nearby Arizona, where Rep. Kyrsten Sinema (D-Ariz.) is hoping to flip the seat left vacant by retiring GOP Sen. Jeff Flake, Trump is 4 points away from pulling even.

The president also remains popular in West Virginia and North Dakota, with a strong majority of voters approving of his job performance there. Sens. Heidi Heitkamp (D-N.D.) and Joe Manchin (D-W.Va.) have spent much of this election cycle touting their willingness to cross the aisle to work with Trump and earn results for their constituents. 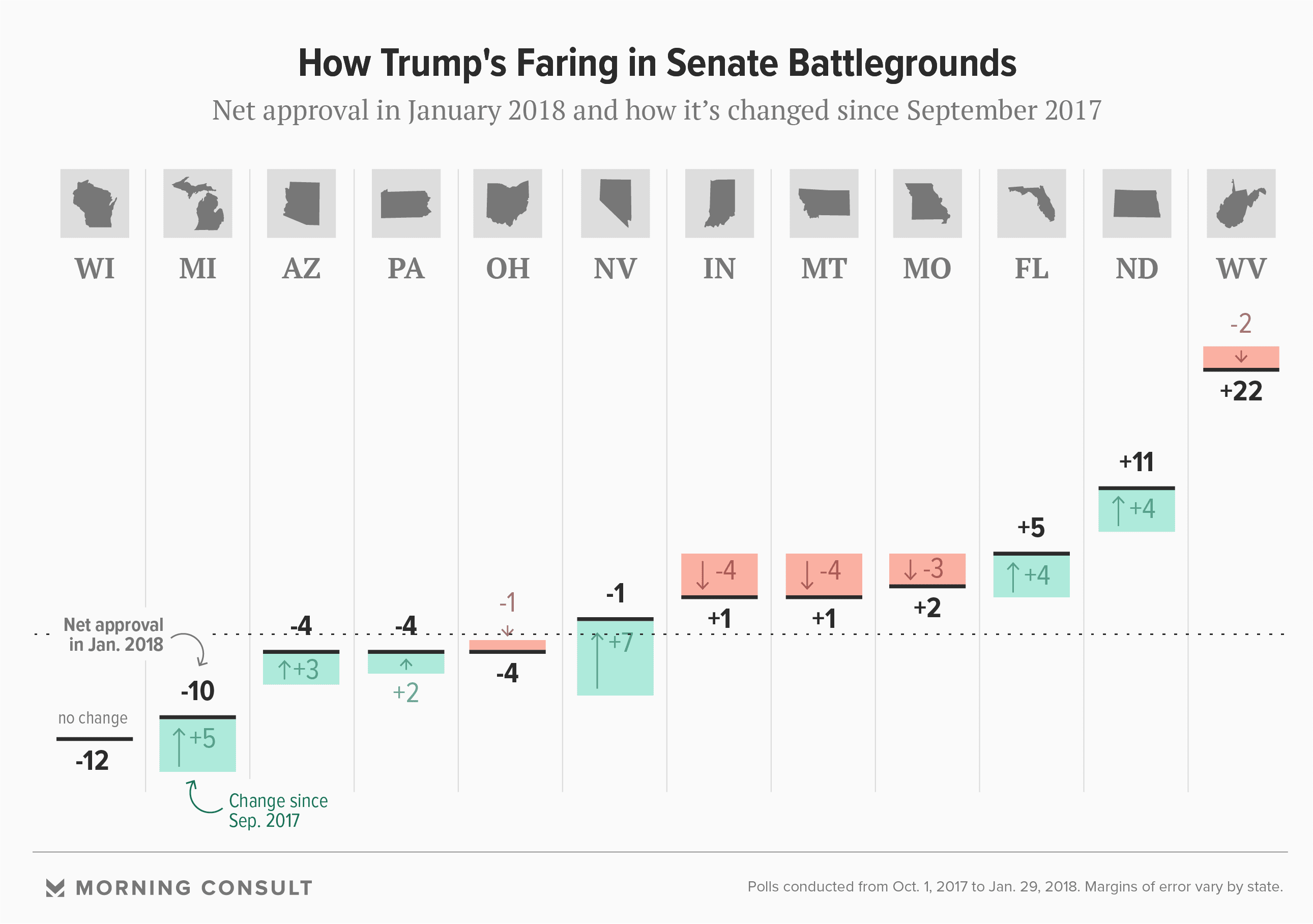 These senators understand that “you’re not going to win just by mobilizing the Democratic base,” Lichtman said. “You’ve got to win over the up-for-grabs, in-between votes, and the more moderate and cooperative you seem in these few states, the better chances you have to win.”

Even in Trump-won states where the president’s approval ratings have been trending downward over the past few months, Democratic incumbents are employing a similar strategy.

Sens. Tammy Baldwin of Wisconsin, where a majority of voters disapprove of the president, and Joe Donnelly of Indiana, where voters are roughly split, have touted their protectionist stances on trade and manufacturing — an integral part of the president’s message. And in Missouri, where a plurality approves of the president, Democratic Sen. Claire McCaskill continues to highlight her bipartisan efforts.

The White House did not respond to a request for comment on the president’s approval ratings or questions about his strategy for the midterms.

Correction: A previous version of this story misstated the date range in which Morning Consult surveys were conducted.