How Adding Users Could Backfire for Snapchat 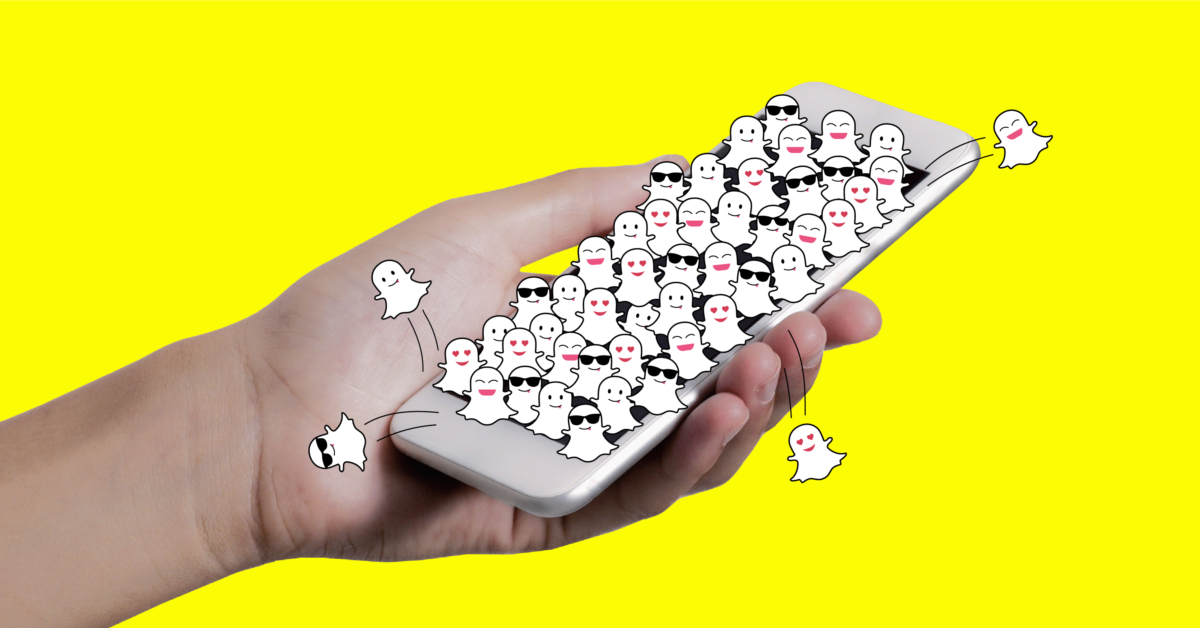 As it nears one year as a publicly traded company, Snap Inc.’s future is largely uncertain.

Snapchat’s user base and revenue are on the rise, but its share price has declined over the past 12 months, with investors divided on its value.

And while Facebook Inc. and Instagram dwarf Snapchat on many important measures, including data from a new Morning Consult poll, some experts say Snapchat’s exclusiveness is where its value lies — and that a move toward growing its audience to incorporate older generations comes with the risk of losing that appeal. 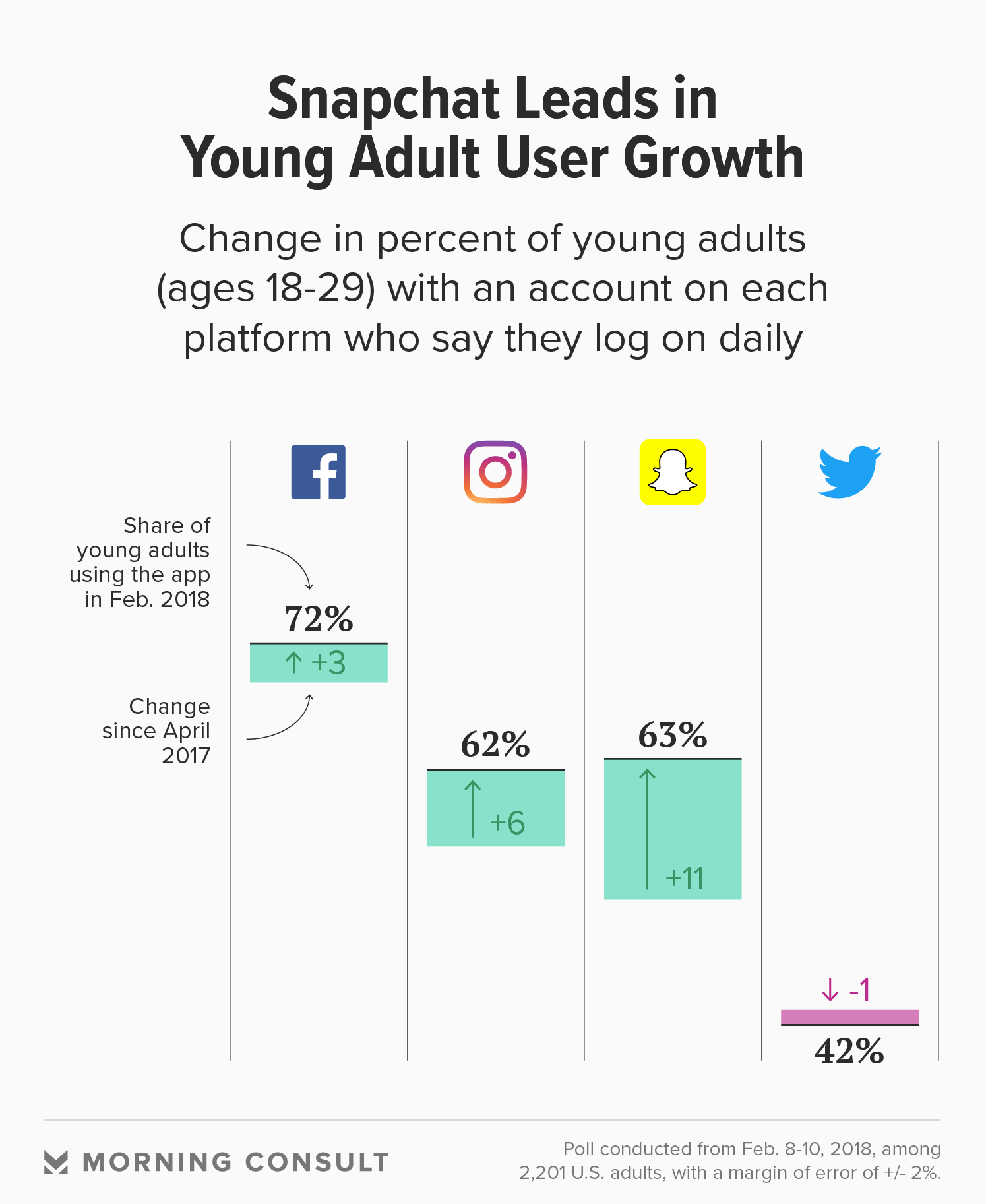 That’s still a low number compared to Instagram’s 500 million daily active users, as of September, and Facebook’s 1.4 billion at the end of last year.

Snapchat reported revenue of $286 million in the last three months of 2017, up from $166 million in the same quarter the previous year and beating analyst projections by at least $30 million. But the company reported a loss of about $159 million in net income for the fourth quarter of last year.

Those metrics — users and revenue growth — are all investors care about, Brian Wieser, CEO of investment firm Pivotal Research Group, said in a Feb. 15  interview, while cautioning against putting too much emphasis on those two measures. Pivotal does not own stock in Snap.

Seventy-three percent of U.S. adults under the age of 30 have a Snapchat account, compared to 34 percent of adults overall, according to a Morning Consult survey conducted Feb. 8-10. That makes Snapchat the social media platform with the largest disparity in account ownership when comparing young adults with consumers overall.

The nationwide poll of 2,201 U.S. adults has a margin of error of plus or minus 2 percentage points.

Young adults are also logging on to the app at even higher rates than last year, polling shows. Sixty-three percent of users ages 18 to 29 said this month that they access Snapchat at least once a day, compared to 52 percent who said the same in an April survey.

Compared with Facebook, Instagram and Twitter, Snapchat was the only social media platform that saw a double-digit jump in its daily use among young adults during that time period, according to Morning Consult polling. 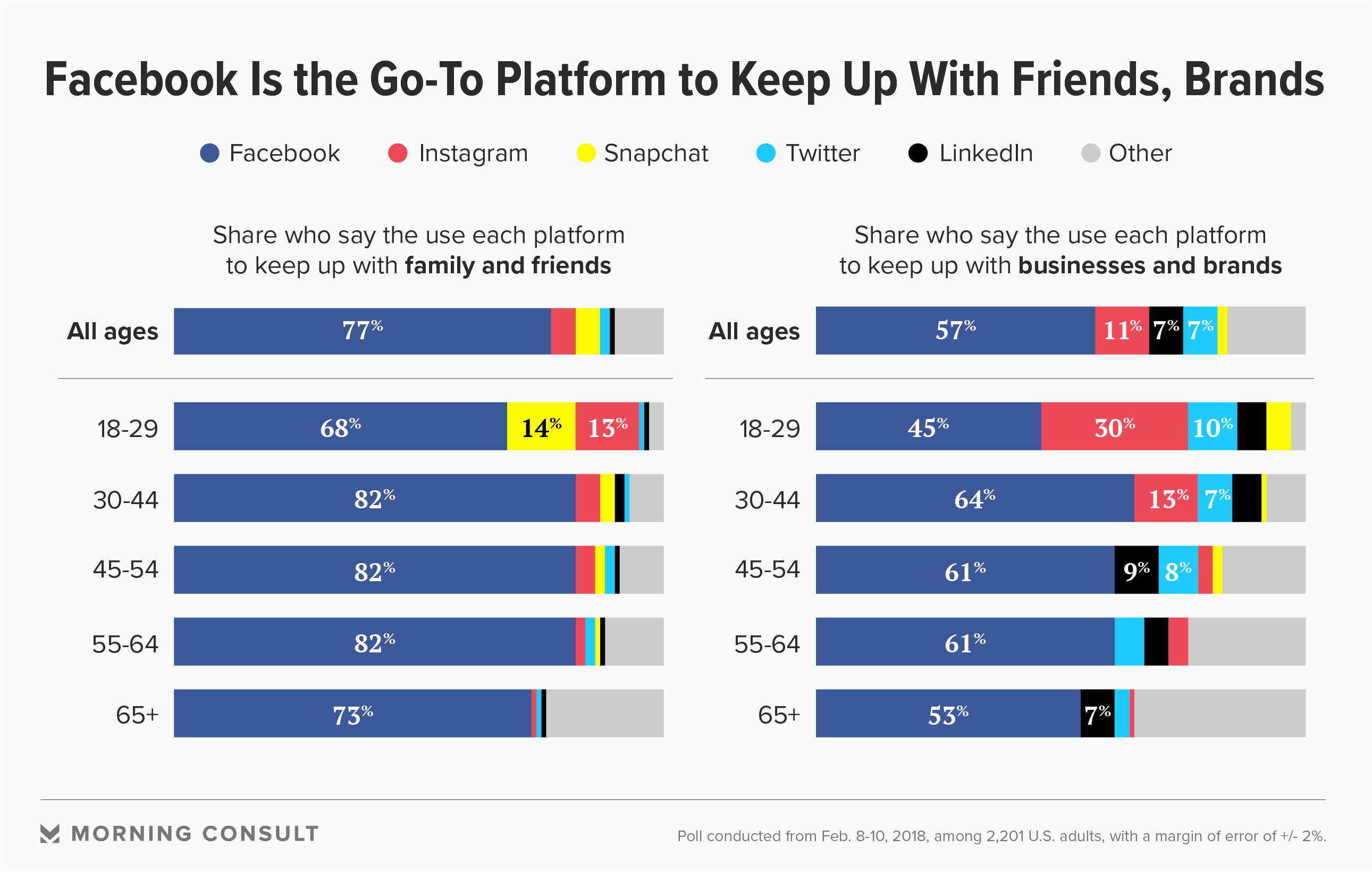 Digital research firm eMarketer estimated on Feb. 12 that Snapchat will add 1.9 million users under the age of 25 this year, alongside a gain of 1.6 million for Instagram and a loss of 2 million users for Facebook within that age group.

Debra Aho Williamson, a principal analyst at eMarketer, wrote in a research note this month that Snapchat could also experience more user growth among older age groups with the app’s new design.

“The question will be whether younger users will still find Snapchat cool if more of their parents and grandparents are on it,” Williamson wrote.

Fifteen percent of adults 45 and older said this month that they have a Snapchat account, up 4 percentage points from April, according to Morning Consult polling.

The backlash against Snapchat’s new interface proves that its core base of young people is loyal to the product, according to Joseph Bayer, an assistant professor in Ohio State University’s School of Communication.

Speaking in a Feb. 20 interview, he said Snapchat should focus more on embracing its core demographic.

“One assumption is that it should basically mimic Facebook strategy,” said Bayer, who researches social media and networks. “I’m not convinced that is what will happen or what Snapchat should be doing.”

Snapchat said the main goal of its recent redesign — introduced in November and rolled out to larger audiences this month — is to separate its social and media sections and create a clear distinction between friends and content.

But so far, users aren’t wild about it. 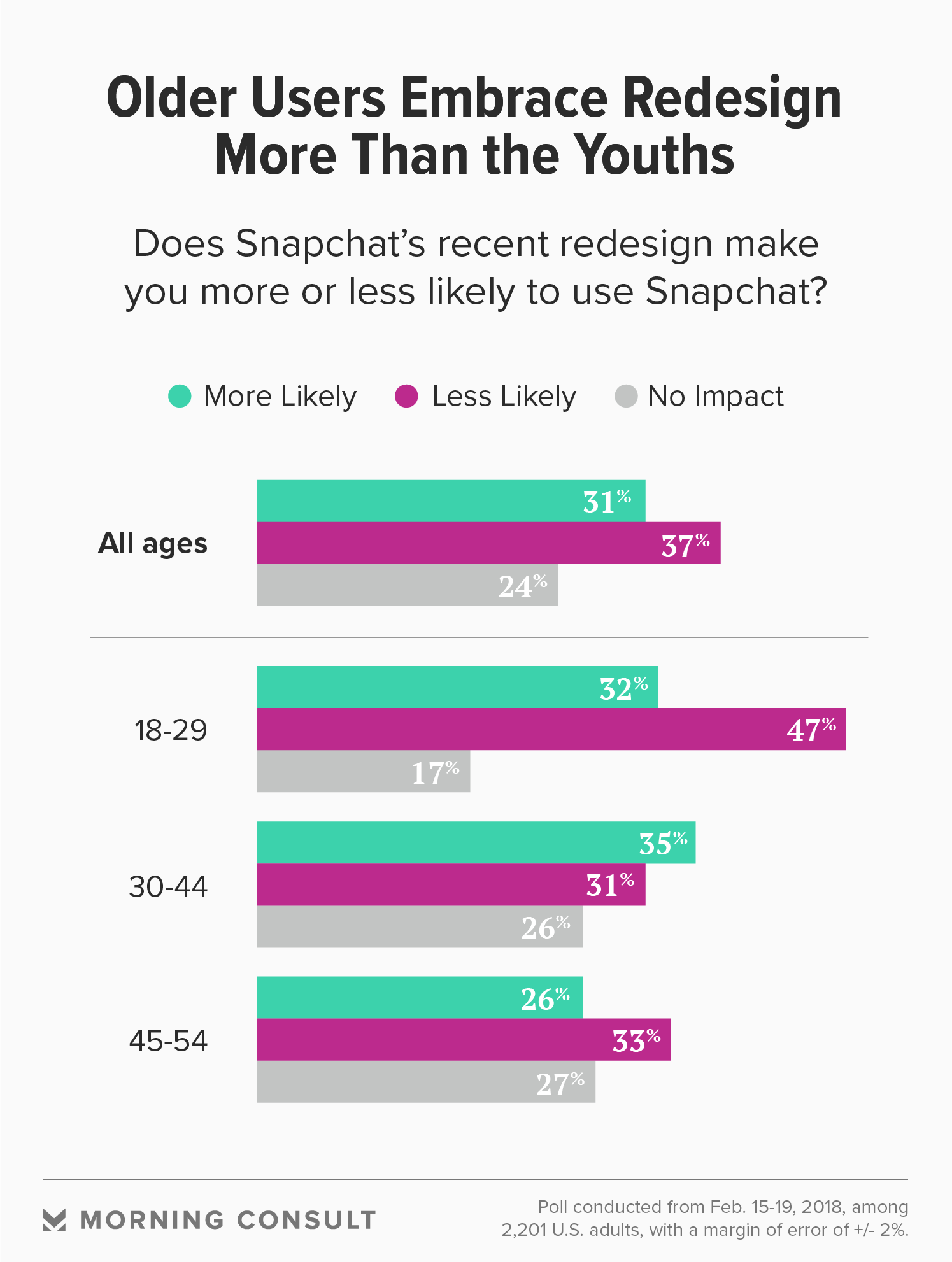 Fifty-one percent of Snapchat users said they prefer the app’s previous interface, a figure that climbs to 63 percent among young adults, according to a Morning Consult poll of 2,201 U.S. adults conducted Feb. 15-19 that has a margin of error of plus or minus 2 percentage points.

A Change.org petition calling for Snapchat to drop the new interface had more than 1.2 million signatures as of Feb. 23, and analysts at Citibank Inc. downgraded Snap’s stock from neutral to sell on Feb. 20.

Celebrities such as television personality Kylie Jenner and model Chrissy Teigen, who have famously shared intimate looks at their lives through Snapchat, have criticized the new design and its impact on how they interact with fans. Last week, beauty brand Maybelline New York deleted a Twitter post saying its Snapchat views have dropped dramatically and asking followers if the brand should choose a new platform to connect.

A Snapchat spokesman told Morning Consult via email that updates this big can take some time to get used to. He did not respond to a question about whether the company intends to draw in older users in the coming year.

Nick Johnson, co-author of “Modern Monopolies: What It Takes to Dominate the 21st Century Economy” said in a Feb. 15 phone interview that once the shock wears off, the redesign will boost both monetization and user growth from an older demographic that will have an easier time understanding the design cues of “what goes where.”

But diversifying its users could hinder Snapchat’s businesses model since the app relies on selling its homogeneous audience to advertisers, according to Ali Mogharabi, an equity analyst for the investment research firm Morning Star.

“If Snapchat generates more of these older users, it’s going to be more difficult to differentiate itself from Facebook or Instagram,” Mogharabi said in a Feb. 21 interview, adding that Snapchat’s specialized demographic is one of the few ways it can compete with the likes of Instagram and Facebook.

Billy Gallagher, author of the new book “How to Turn Down a Billion Dollars: The Snapchat Story,” said Snapchat should focus on upping its product game.

Snapchat had an enormous product growth period in 2013 and 2014 in which it came out with one product after another, said Gallagher: Snapchat Stories, text chats, video calling, Snapcash and Discover, to name a few.

Gallagher said in a Feb. 14 interview that initial growth is hard to replicate, but such innovation is what will keep competitors at bay.

“They need to figure out what is the next chapter of Snap,” he said. “What’s the next feature they’re going to create that really excites users and has good growth potential?”