Poll shows U.S. adults also split on whether closer economic ties between Washington and Beijing are a good thing

As a presidential candidate in 2016, Donald Trump pledged repeatedly that he would take a tough line on China. Now that he’s been president for more than a year, U.S. adults are divided over the state of economic relations between the two countries since Trump took office.

A Morning Consult poll conducted from Feb. 8-10 found that a 37 percent plurality of U.S. consumers said Trump is taking the right approach to Washington’s economic relationship with China, with 35 percent disagreeing. Twenty-eight percent of respondents said they either didn’t know about the issue or had no opinion.

The poll surveyed 2,201 adults and has a margin of error of plus or minus 2 percentage points.

On the campaign trail, Trump regularly criticized how previous administrations — both Democratic and Republican — handled the U.S.-China relationship. In a published campaign plan, Trump pledged to “bring China to the bargaining table by immediately declaring it a currency manipulator” and said that protection of intellectual property would be a key goal for a Trump administration.

The Trump administration, however, has not named China a currency manipulator, though it has taken action on other China-related pledges. The Commerce Department, for instance, recently suggested using a national security law to impose tariffs on steel and aluminum imports from China and several other countries, a sign that the administration is on guard about the potential political consequences of not acting on Trump’s campaign promises. 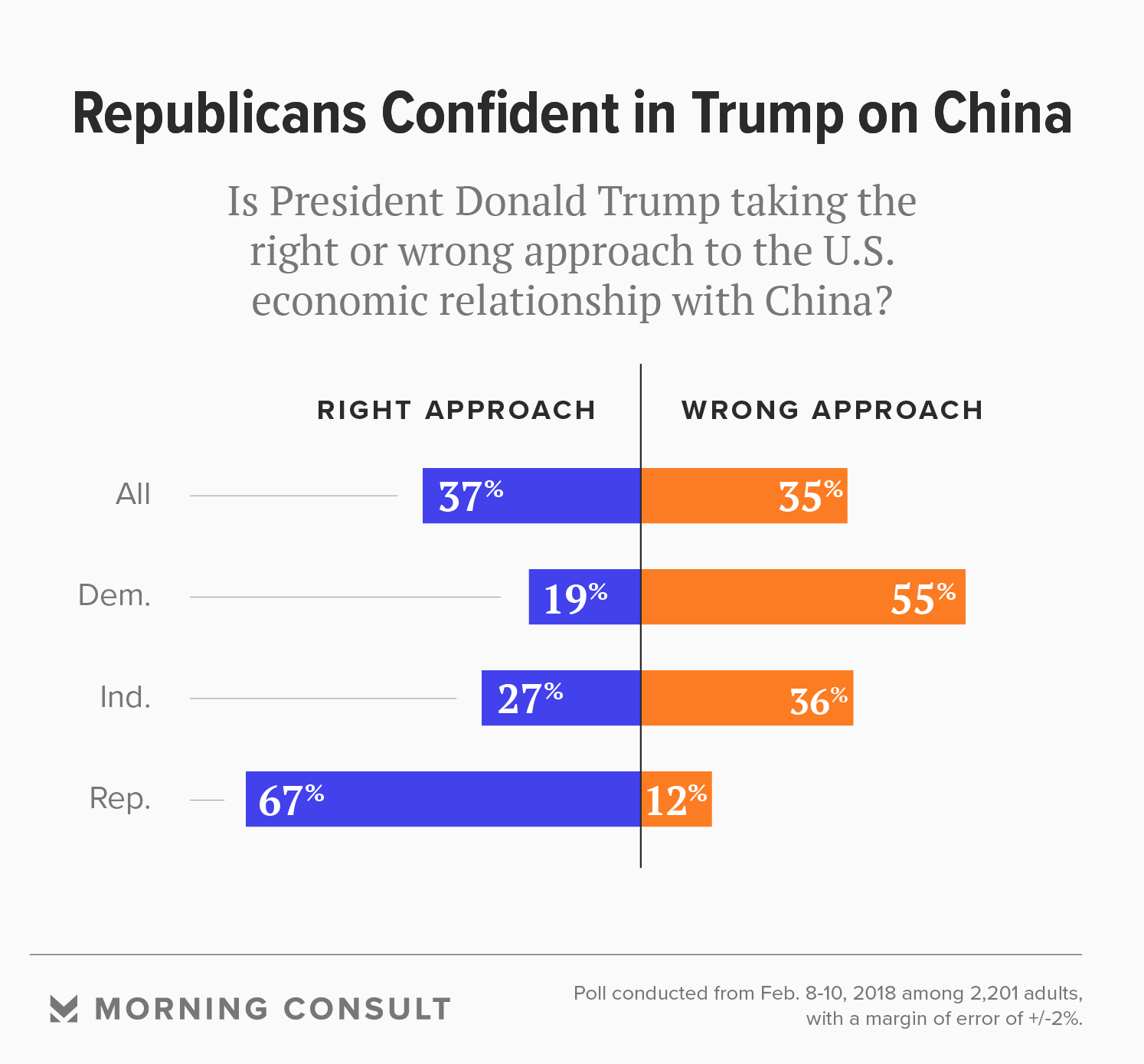 Derek Scissors of the Washington-based American Enterprise Institute pointed to signs that Democrats are planning on making perceived inaction on China a campaign issue this year. Scissors said in a Feb. 16 interview that Democrats could use Trump as a foil in their midterm races against Republicans and argue that the GOP is not delivering on its promise to be tougher on China.

“The political pressure on the administration to act is going to rise,” said Scissors, who specializes in U.S.-China economic relations.

In the Morning Consult poll, 36 percent of independents said Trump is taking the wrong approach, compared to 12 percent of Republicans and 55 percent of Democrats who shared that view.

Kent Hughes, a public policy fellow at the Wilson Center in Washington, said in a Feb. 20 interview that Trump’s actions on issues like industrial tariffs and intellectual property “very much fit within the campaign priorities that Trump had articulated.” But he said a crowded White House agenda — taxation, immigration and gun laws — China might take a back seat for the time being.

“If I were in that administration and I wanted to make sure that there were some added focus on my China policy, I would wait until these other issues cleared some space for me to make that point,” said Hughes, who served as assistant secretary of commerce in the Clinton administration.

Further action against China would likely involve Trump administration officials like U.S. Trade Representative Robert Lighthizer and Commerce Secretary Wilbur Ross. But they’re only one side of the equation, according to Sen. Sherrod Brown of Ohio, who said the administration has “fallen far short” of his expectations on the trade front.

“The problem in the White House is whispering in one ear are some people who are right on trade like Lighthizer and Ross,” Brown said in a Feb. 6 interview. “And in the other ear, you’ve got all of the Wall Street executives, in his other ear, whispering.” 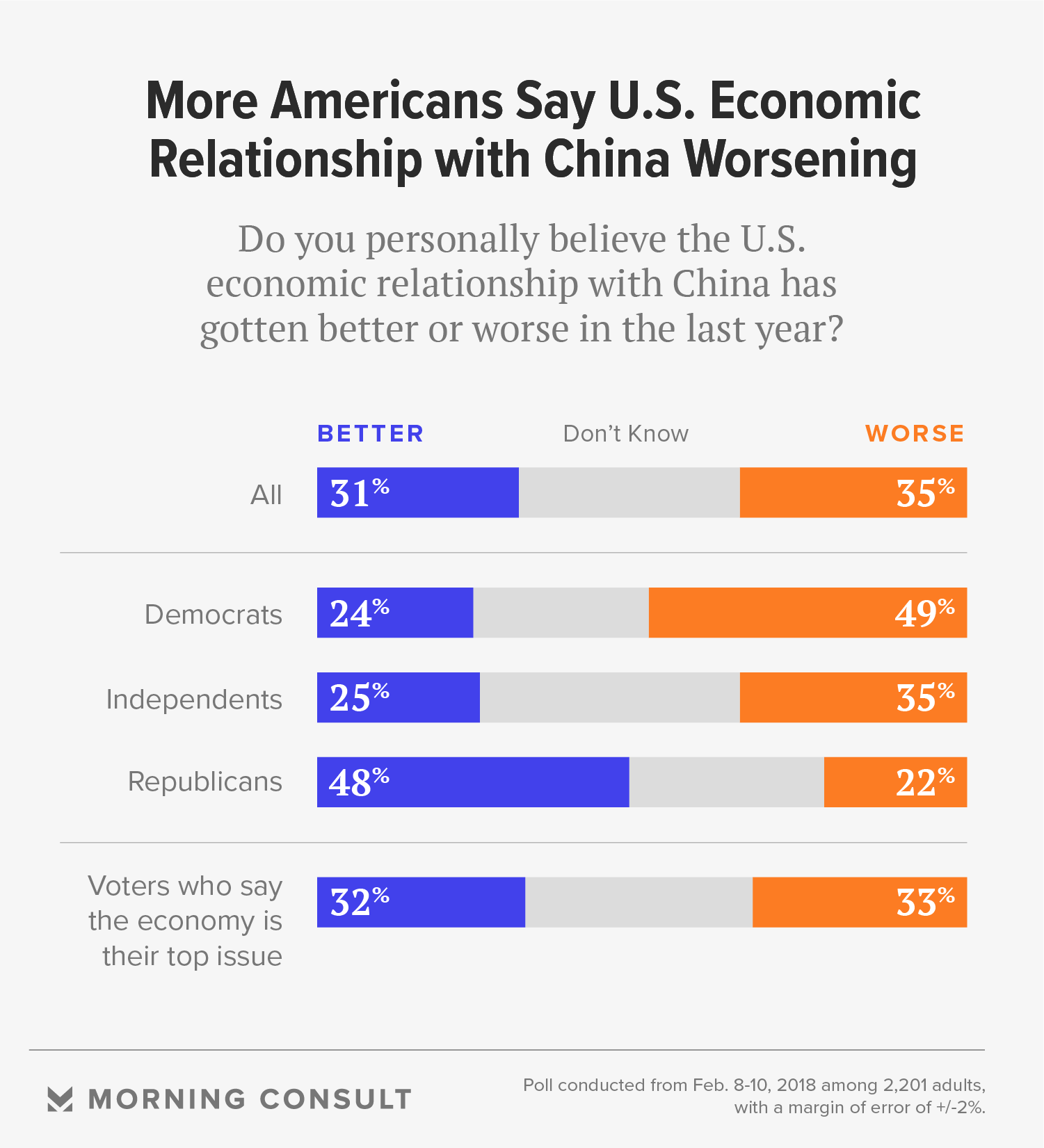 Trump’s approach also has supporters, mostly from the other side of the aisle. Sen. John Kennedy (R-La.) said in a Feb. 15 interview that in some ways Trump’s “done exactly what he said he was going to do” — even if some campaign promises have gone unaddressed. Kennedy added that while Trump hasn’t taken much action, “that doesn’t mean he won’t.”

Of the four major issues facing the U.S.-China economic relationship, the trade deficit is atop the list of priorities for the largest share of U.S. adults, according to the Morning Consult poll. Sixty-six percent of respondents said shrinking the bilateral trade deficit was a concern, with 38 percent labeling it “very important” and 28 percent calling it “somewhat important.”

The bilateral trade deficit with China last year was $375.2 billion, an 8 percent increase from 2016’s balance, according to U.S. government figures. The gap, which measured the difference between imports and exports of goods, is likely to widen in the near term because the new U.S. tax law could stimulate economic growth and consumer spending, which in turn would mean more imports from China, according to AEI’s Scissors.

“If we grow faster, guess what happens? We buy more of their goods,” Scissors said. “The biggest action the Trump administration has taken so far is to push the trade deficit up.”

“The Trump Administration’s policies will help change the trajectory of the deficit as they are implemented,” Strom said in a Feb. 20 email statement provided to Morning Consult. “Our aggregate trade deficit has been large and persistent for many years and will take time to fix.”