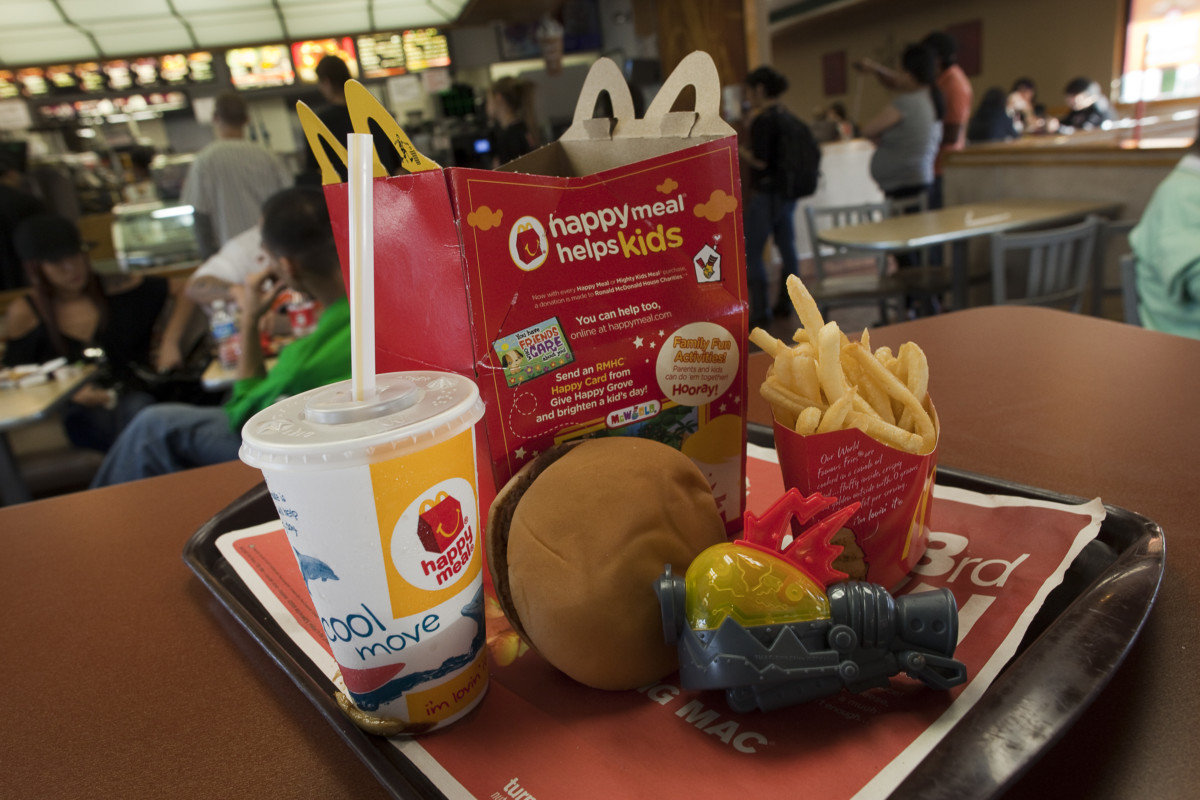 A Morning Consult poll shows that parents are more likely to buy a Happy Meal for their child if the menu options are healthier but not as likely if the meal came with a Disney toy. (Photo by David Paul Morris/Getty Images)
By Anna Gronewold

McDonald’s announced two major changes to its Happy Meals last month — a lower-calorie menu and a renewed promotional partnership with Walt Disney Co. — and parents say the healthier options are more likely to get them to buy a Happy Meal for their child than Disney toys and packaging, according to Morning Consult polling. 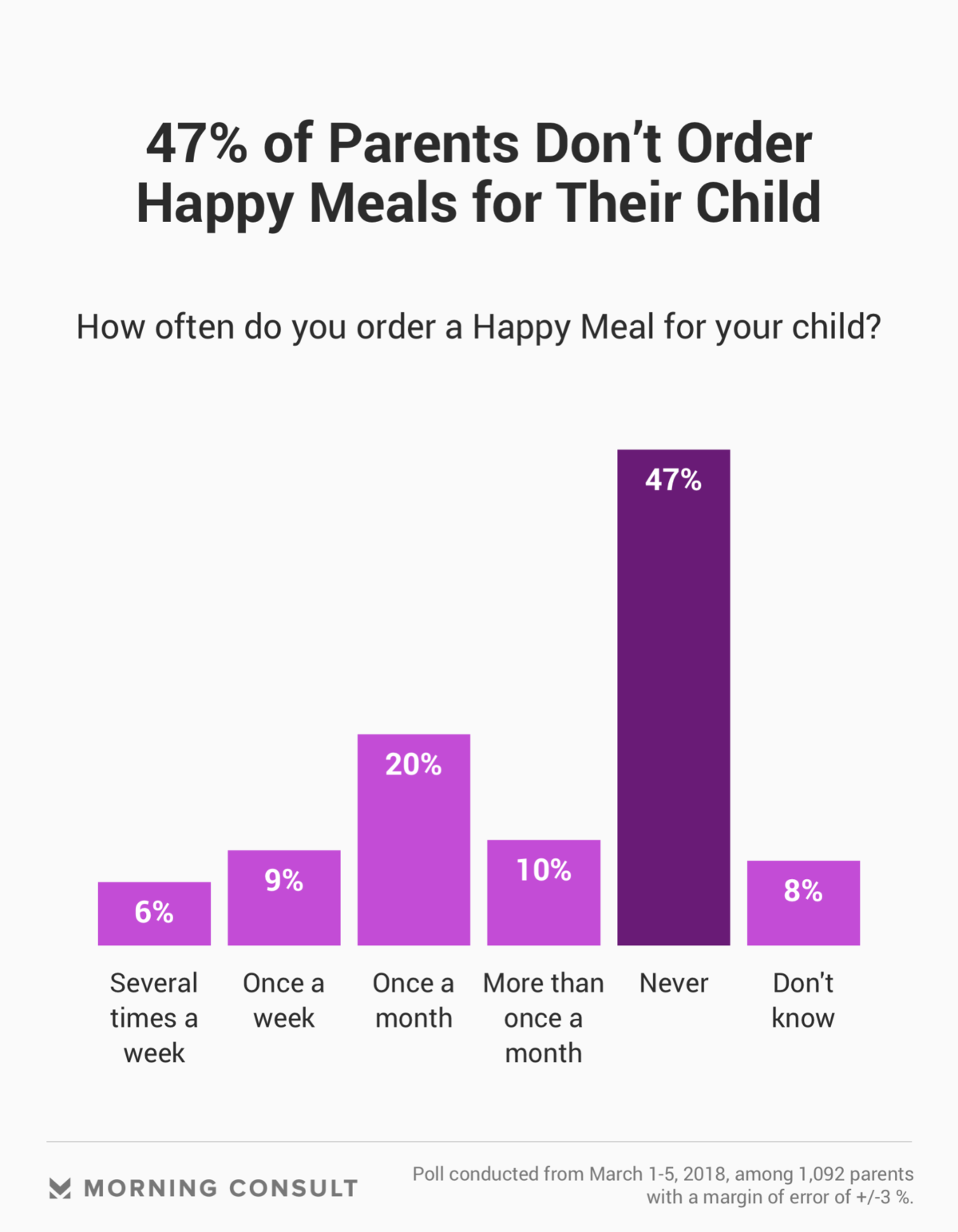 Among 1,092 parents in a Morning Consult poll of 2,201 adults conducted March 1-5, 56 percent said they are unlikely to order a Happy Meal for their children in the coming month, compared to 39 percent who said they likely will. The margin of error for the subsample of parents is 3 percentage points.

A 43 percent plurality of parents said the Disney partnership would make them more likely to order a Happy Meal for their children, compared to 42 percent who did not know or had no opinion.

The menu switch could also draw some new Happy Meal customers. Of the 47 percent of parents who said they never buy Happy Meals for their children, 34 percent said McDonald’s new nutritional guidelines would make them more likely to purchase them, while a 45 percent plurality said they didn’t know or have an opinion.

One-quarter of the parents who don’t currently buy Happy Meals said the Disney partnership would make them more likely to order one for their child.

John Stanton, a marketing professor at Saint Joseph’s University who studies the food industry, said the recent focus on the Happy Meal is in line with McDonald’s marketing to children through its restaurant design and “spokesclown” Ronald McDonald.

“The kids who say they want to go to McDonald’s — well, the parents can obviously veto that,” Stanton said in a March 6 phone interview. “This is an attempt to stop that veto vote, to get people to believe that maybe these meals are a little bit better. What I’m not sure of is whether it is a little better.”

To get its Happy Meal menus to meet the new nutritional goals, McDonald’s will serve a smaller portion of french fries with the six-piece Chicken McNugget meal and will remove cheeseburgers and chocolate milk as options on the Happy Meal menu, though both will be available on request.

The new standards are in line with Disney’s nutritional guidelines, which Disney noted when the companies announced on Feb. 27 they will reunite as cross-promotional partners through Happy Meal toys and packaging.

In May 2006, Disney ended its promotional pact with McDonald’s, and in October of the same year, the entertainment company announced nutritional standards that would link its brands and characters with healthier foods.

Marion Nestle, a nutrition, food studies and public health professor at New York University, criticized McDonald’s moves, saying, “Kids should not be bribed with toys into pestering their parents for these meals.”

“This is about selling Happy Meals, not encouraging kids to make healthful dietary choices,” Nestle said by email March 6.

In response, McDonald’s spokeswoman Becca Hary in an emailed statement to Morning Consult pointed to steps McDonald’s has taken since 2012 to remove artificial preservatives, incorporate fruit and low-fat dairy, and to distribute books to kids in Happy Meals.

Nearly 1 in 5 young people ages 2 to 19 in the United States is obese, according to a February 2018 analysis of federal data in the journal Pediatrics. Katherine Brooking, a New York-based dietitian and co-founder of AppforHealth.com, said McDonald’s would need to revamp its menu to center on United States Department of Agriculture standards, Mediterranean diet principles and fresh produce to make McDonald’s a choice she could support as more than an occasional treat.

That’s causing shifts in menu norms as restaurants compete to cater to millennials, who are more aware of their food quality, Brooking said in a March 5 phone interview.

“It used to be an option to have a healthy item on your menu; now, it’s becoming a must that you have not just one healthy option, but several healthier options,” she said.