When asked which candidate they were more likely to vote for if the presidential election were held today, 44 percent of registered voters said an unnamed Democratic candidate, while 36 percent said Trump, according to a March 1-5 survey of 1,993 registered voters. Nineteen percent said they didn’t know or had no opinion.

When asked who they would choose in an election today between an unnamed Democratic candidate and a Republican not named Donald Trump, the hypothetical GOP presidential candidate garnered 28 percent, compared to 42 percent for the Democratic rival. Thirty-one percent said they didn’t know or had no opinion. 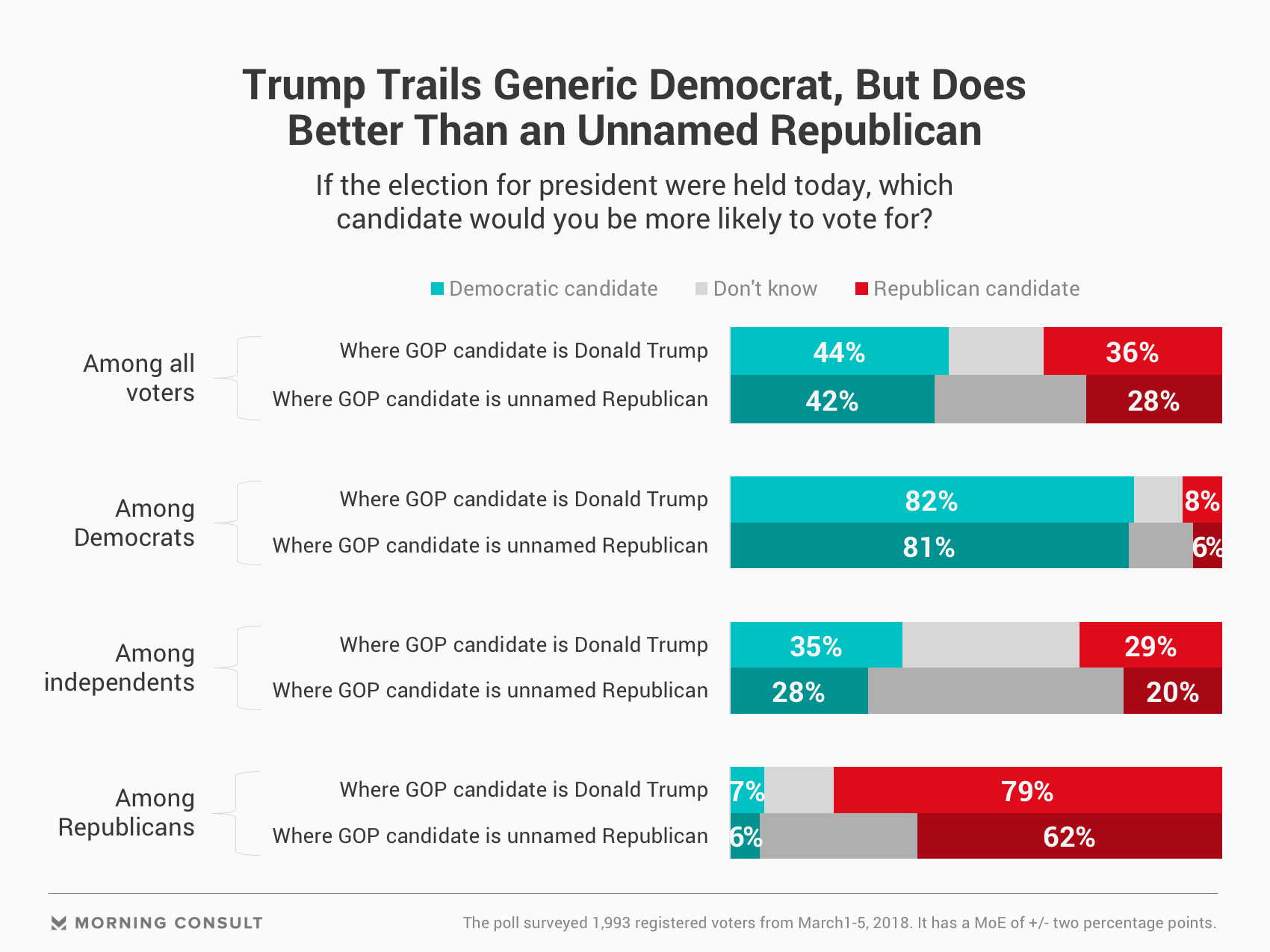 Nathan Gonzales, editor and publisher of Inside Elections, said Trump is the most popular figure within the Republican Party “almost everywhere.” In order for a potentially different Republican to beat a hypothetical Democratic rival, he or she is “going to need the president’s supporters in order to win,” Gonzales said in a Tuesday phone interview.

The survey comes about two years ahead of the 2020 primary season and follows Trump’s Feb. 27 announcement that digital strategist Brad Parscale will manage his re-election bid.

The White House and the Trump campaign did not respond to requests for comment.

“The Trump coalition, at this point, is bigger than the traditional Republican coalition,” said Andrew Surabian, a former special assistant to Trump who is a self-employed Republican strategist, in a Tuesday phone interview.

Related: The Most Popular 2020 Democratic Prospect Not Named Joe Biden

John Weaver, a self-employed Republican strategist who works for Ohio Gov. John Kasich (R), said Democrats are energized right now against Trump, which he added does not bode well for Republicans in 2020, depending on who is on the ballot, or the 2018 midterms.

“I think the tsunami is formed out there. We can’t quite see it yet, and all the other animals except for the humans have raced up into the hills,” he said in a Tuesday phone interview.

Among voters overall, this month’s presidential matchup numbers are similar to the results from a Nov. 16-19 Morning Consult/Politico poll that asked voters if they would re-elect Trump or vote for the Democratic candidate if the 2020 presidential election were held then.