To Win Streaming Music Wars, Spotify Has Potential Edge in Its Appeal to Young Adults

A view from the crowd during Spotify's RapCaviar Live concert series in Houston on Dec. 14, 2017. (Photo by Tim Warner/Getty Images for Spotify)
By Anna Gronewold

As Spotify Technology SA, the world’s biggest on-demand music service, gears up for its listing on the New York Stock Exchange on April 3, the potential bright spot in the money-losing company’s outlook is its attractiveness to young people, according to Morning Consult polling.

In a survey of 2,201 adults conducted March 8-10, a plurality of 30 percent said they had a Pandora Media Inc. subscription, compared to 21 percent who said they subscribe to Spotify and 15 percent who have an Apple Music account. Pandora and Spotify have free and paid subscriptions, while Apple Music has only paying customers.

When the 1,230 people who don’t use a music streaming service were asked which one they would choose if they had to, 51 percent picked Pandora, 28 percent Apple Music and 21 percent Spotify.

But among young adults ages 18-29 who don’t use a music streaming service, a 44 percent plurality said they would choose Spotify, Pandora got 34 percent and Apple Music 22 percent. The margin of error for the subsample is 3 percentage points.

As one of the first players in the industry, Pandora carries a brand name that remains attractive, said George Howard, associate professor of music business and management at Berklee College of Music, in a March 15 phone interview, but its leading market position “may be a case of brand equity more than any real feeling of loyalty or value.” 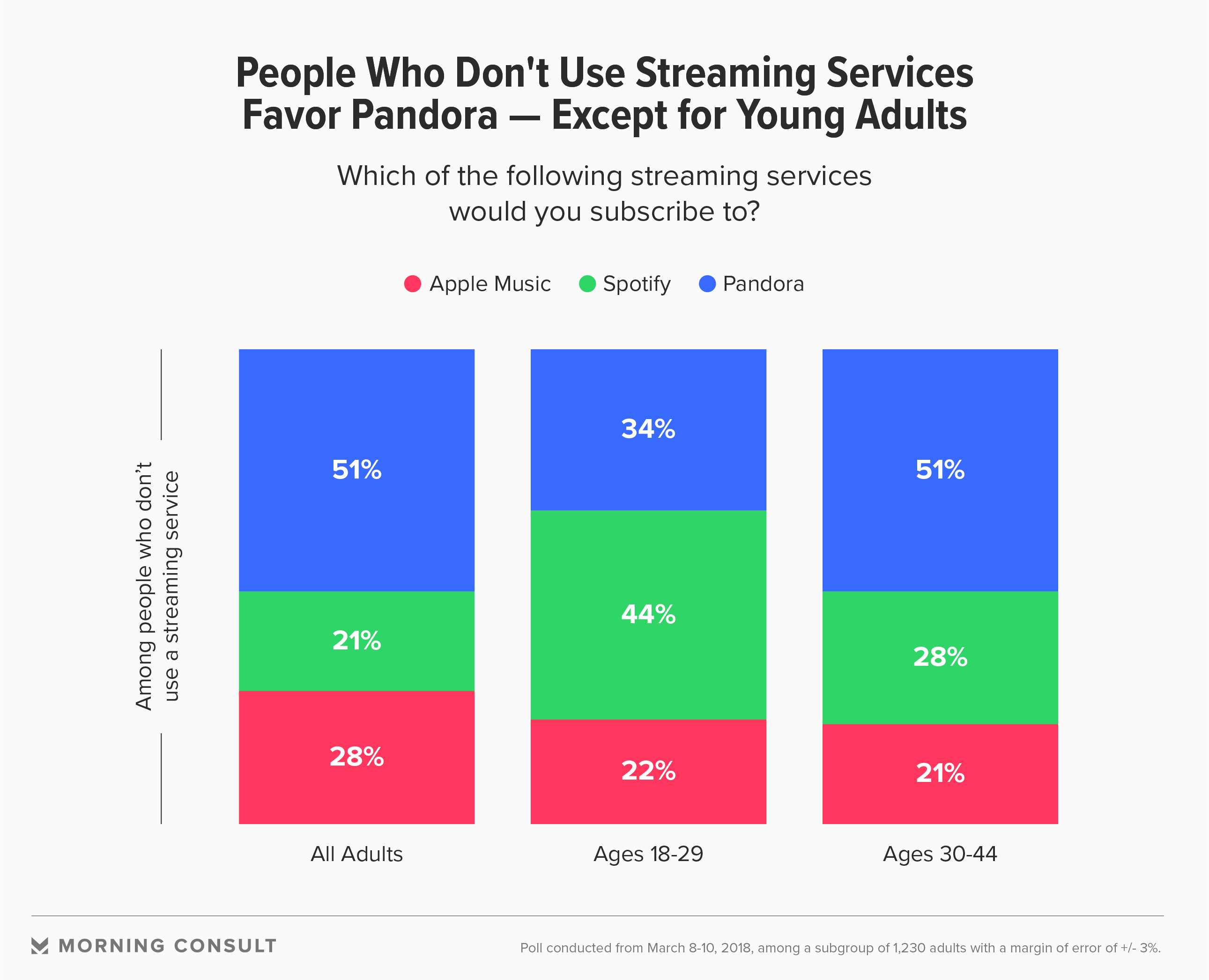 Gerd Leonhard, founder and chief executive of The Futures Agency and co-author of “The Future of Music: Manifesto for the Digital Music Revolution,” said in a March 14 phone interview that he believes Spotify has an advantage over Pandora in its popularity among young people, algorithms and global scale. Spotify, which launched in Sweden in 2008, became available in the United States in 2011 and now reaches 61 countries and territories.

But in competition with Apple, Spotify’s biggest issue will be its business model, which is entirely dependent on its suppliers, Leonhard said. The more users and usage Spotify attracts, he warned, the more it has to pay to the labels that hold the music rights.

“In the music business, it’s quite obvious these labels are cartels in the truest sense of the word, and if they refuse to play ball, that’s it — game over,” he said. “They can do whatever they please because they have the copyright.”

Related: Spotify and Pandora Lose Big Against Radio, Except Among Millennials

Apple Music, which began in 2015, does not need to make large profits on its music because it sells devices, Leonhard said. He predicted Spotify will need to explore new methods of topline revenue, such as artificial intelligence and unique user benefits, to compete with Apple.

Spotify and Apple Music charge $9.99 a month for on-demand, ad-free music. Spotify also has a free, advertising-supported service. Pandora, which began in early 2000 as Savage Beast Technologies and went public in the United States in 2011, offers a free radio service with ads, a $4.99-per-month plan with no ads and a premium service for $9.99 a month that offers on-demand listening.

Spotify reported that last year it generated revenue of 4.09 billion euros ($5 billion), and had a net loss of $1.5 billion and an operating loss of $464.8 million at the exchange rate listed in a Feb. 28 filing with the Securities and Exchange Commission for a direct listing — one in which no new stock is issued and no new money is raised — on the New York Stock Exchange under the ticker symbol “SPOT.”

The company said it had 71 million paying subscribers and 159 million active users as of the end of 2017. By comparison, Eddy Cue, Apple’s senior vice president of internet software and services, said at the South by Southwest conference in Austin, Texas, that Apple Music has 38 million paying subscribers, as reported on March 12 by numerous media outlets such as Reuters. Pandora, which is not available outside the United States, said Feb. 21 that it had 5.5 million paid subscribers and 74.7 million active listeners at the end of the fourth quarter in 2017, a 7.8 percent drop from the same period in 2016. 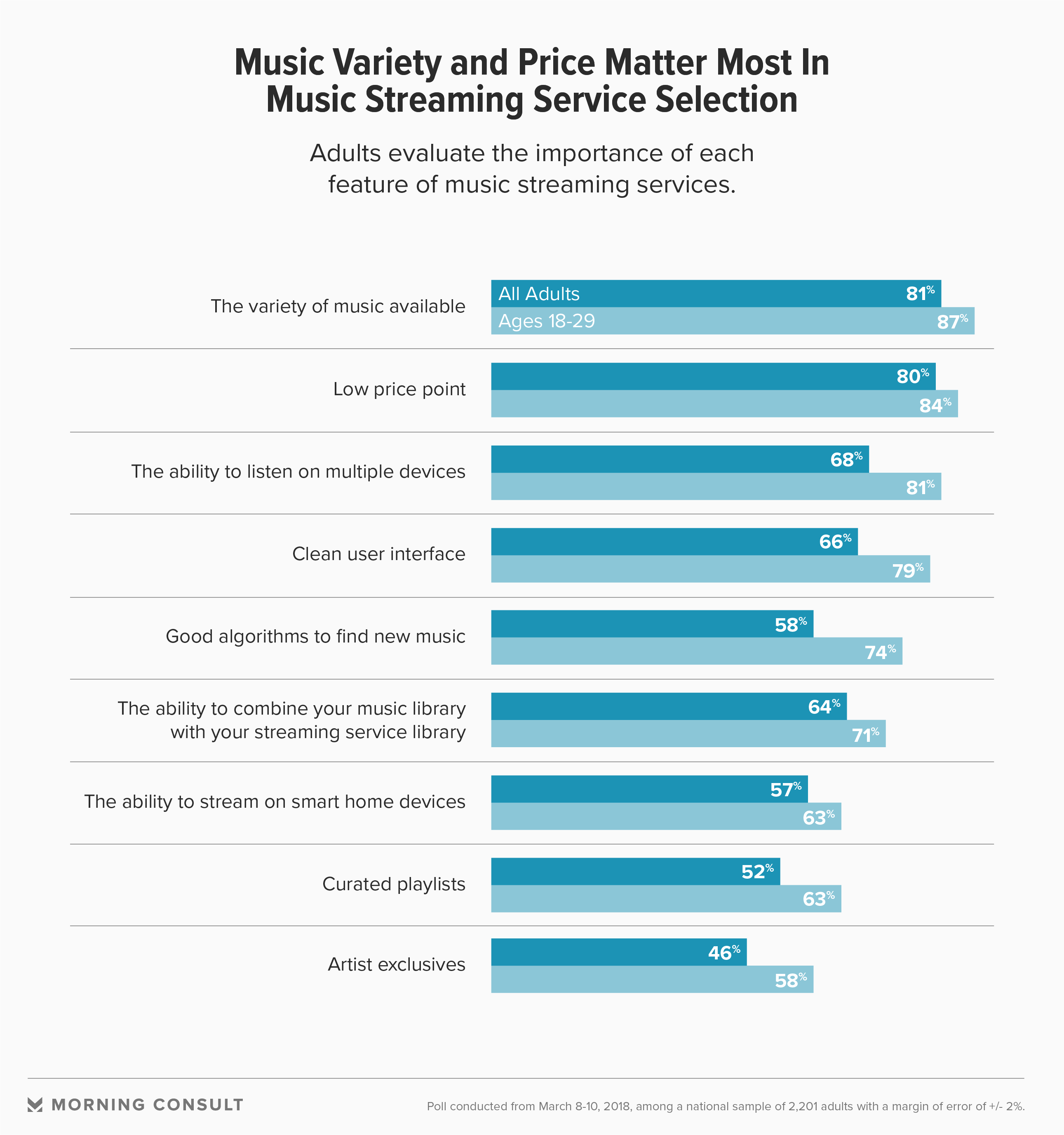 Another potential problem for Spotify is the lack of compatibility with Apple’s smart speaker. For Spotify users with an Apple HomePod, the Spotify app must be played through AirPlay rather than voice-activated Siri, meaning the HomePod gets interrupted every time another audio source, such as a video on Twitter or Instagram, comes through a person’s device.

Of 971 music streaming users in the poll, 50 percent said the compatibility of the streaming service with smart home devices would likely make them switch services. That percentage increases to 53 percent among ages 18-29. The margin of error for the subsample is plus or minus 3 percentage points.