The percentage of voters who say President Donald Trump’s administration is running chaotically has risen in recent weeks, according to a new Morning Consult/Politico poll, as more members of his staff have left either by choice or involuntarily. 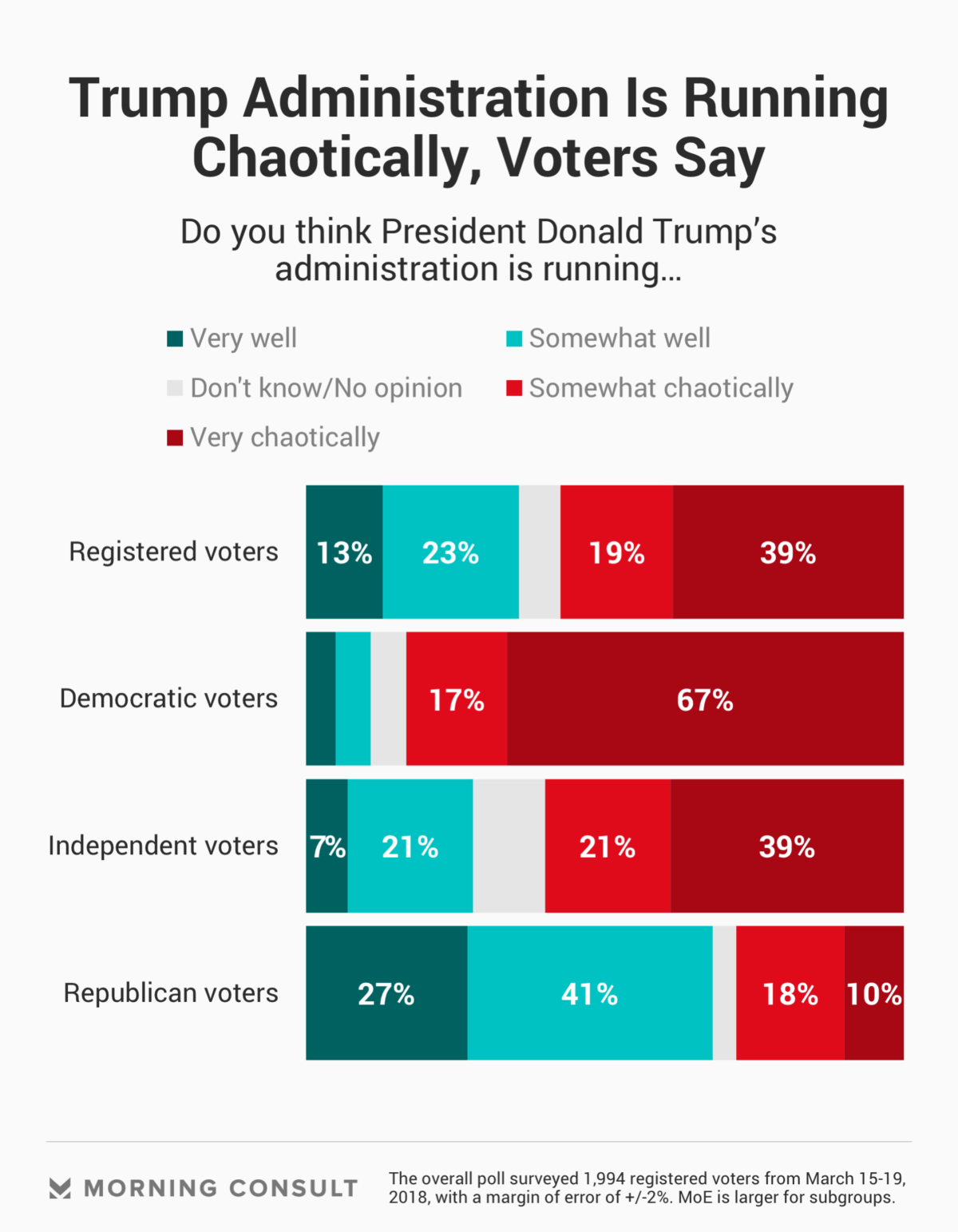 The March 15-19 survey – conducted after the firing of Secretary of State Rex Tillerson and amid the ouster of Andrew McCabe as deputy director of the Federal Bureau of Investigation – found 58 percent of voters saying the administration is running either somewhat or very chaotically, up 4 percentage points from a similar poll conducted March 1-5 following the controversy surrounding domestic abuse allegations against now-former White House staff secretary Rob Porter, as well as the resignation of Communications Director Hope Hicks and a security clearance downgrade for Trump son-in-law and senior adviser Jared Kusher.

Both surveys have a margin of error of plus or minus 2 percentage points.

Chris Lu, who served as White House Cabinet secretary from 2009-2013 and is now a senior fellow at the University of Virginia Miller Center, said in a Monday phone interview that although turnover is common at this point in any president’s tenure, changes are happening frequently enough in this administration to call into question how Trump’s aides and Cabinet secretaries will handle future crises.

“People take for granted when government works well, and people don’t appreciate how hard that is until they’re faced with an administration that’s not running well,” Lu said. “Ultimately, the downside is not staff turnover, but what effect it has on the basic functioning of government and the delivery of services to the American people.” 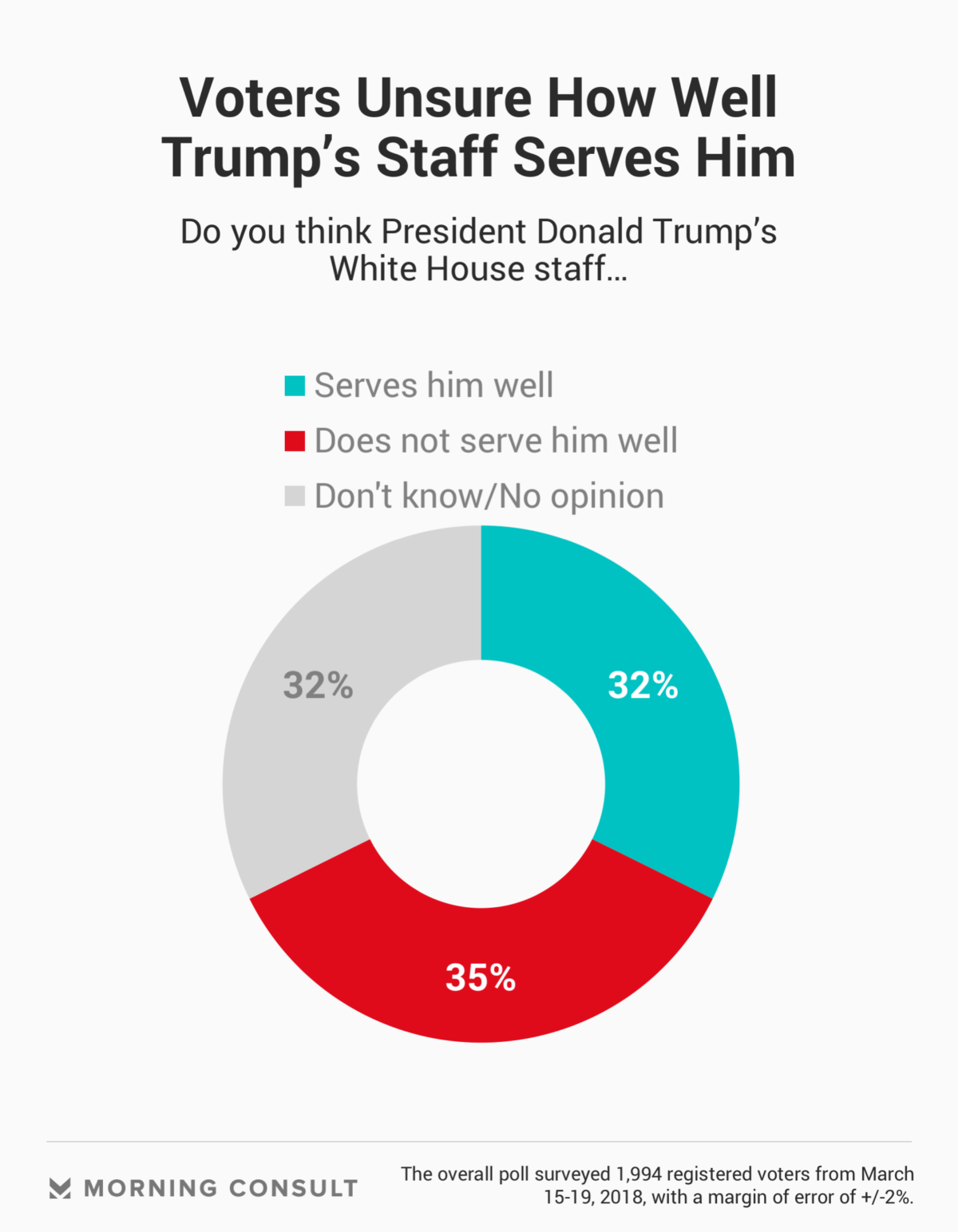 Staff turnover in Trump’s White House during his first year was higher than during the first 365 days of each of the five previous presidential administrations, according to a Jan. 19 study by the Brookings Institution.

Meanwhile, the percentage of Democrats who said the Trump administration is running chaotically rose from 80 percent to 84 percent in the latest poll, while the share who said it’s running well dropped from 15 percent to 11 percent.

The most recent survey found voters were split when asked about the quality of the White House staff. A 35 percent plurality said Trump’s staff does not serve him well, while 32 percent said it does, with the same percentage saying they didn’t know or had no opinion.

When the same question was asked in a July poll, 29 percent of respondents said Trump’s staff serves him well, compared to 39 percent who said they don’t. Thirty-three percent said they didn’t know or had no opinion.

The public’s awareness of personnel issues in this administration could be exacerbated by the prominence of social media, according to former George W. Bush administration official Cesar Conda.

“I think it’s magnified only because we’ve got a second-by-second Twitterverse out there that blows up these things and makes them seem like emergencies when in fact they’re not,” Conda, who was a domestic policy adviser to former Vice President Dick Cheney, said in a Monday phone interview.

Conda, now a founding principal and policy adviser at Washington-based Navigators Global LLC, said that at this point in an administration, turnover throughout the executive branch is common because of burnout from the often intense and demanding workload. The Trump administration, he argued, has responded effectively to this type of turnover by quickly naming replacements, such as Larry Kudlow to direct the National Economic Council following the departure of Gary Cohn and Mike Pompeo to lead the State Department.

“As long as you have the infrastructure underneath, there shouldn’t be any lack of public confidence in these sorts of changes,” Conda said.