Poll respondents were split, 39% to 43%, on whether tariffs would help or hurt U.S. economy

Almost half of voters favor President Donald Trump’s threats of new tariffs on Chinese imports, but they’re split on whether the duties will hurt the U.S. economy, according to a recent poll.

Forty-eight percent of respondents in a Morning Consult/Politico survey conducted April 5-7 said they either strongly or somewhat support the tariffs of 25 percent on about 1,300 products in retaliation to Beijing’s allegedly ineffective enforcement of U.S. companies’ intellectual property rights. Thirty-five percent of voters said they oppose the duties and 17 percent said they did not know or had no opinion.

The overall online survey of 1,994 registered voters nationwide has a margin of error of plus or minus 2 percentage points.

The duties, if implemented, could total as much as $150 billion annually and would follow separate tariffs of 25 percent on global steel imports and 10 percent on aluminum imports that went into effect March 23. China responded to the most recent threat of additional duties by issuing its own threat of tariffs on U.S. exports such as farm products, automobiles and aircraft.

Poll respondents were split on whether the tariffs would help or hurt the U.S. economy: Thirty-nine percent said they would help, while 43 percent anticipate a negative impact and 18 percent don’t know or don’t have an opinion.

Sixty percent of voters were in agreement that tariffs will hurt China’s economy, while 25 percent said they didn’t know or didn’t have an opinion. Fifteen percent said they think China will get an economic boost.

Sixty-seven percent of voters said they believe that tariffs will make products more expensive in the United States, with 5 percent saying they expect cheaper goods and 15 percent saying duties won’t make much of a difference. However, it’s unclear how much the tariffs could impact domestic prices and consumer behavior, according to economists interviewed Tuesday. 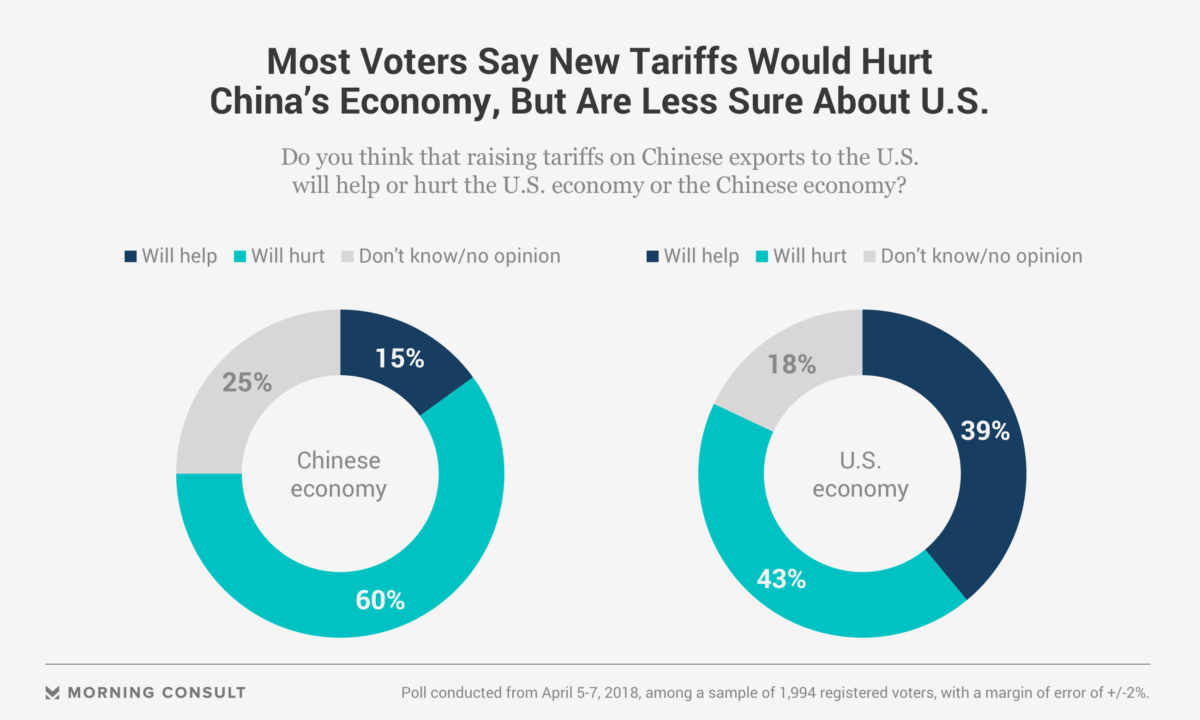 Bradford Jensen, a professor of international business at Georgetown University and nonresident senior fellow at the Peterson Institute for International Economics, said U.S. producers could absorb some of the tariff costs, which would avoid the need to pass those costs along to consumers. Jensen added that such calculations are difficult for companies to make at this time because the administration hasn’t finalized the tariffs.

“If you’ve got to make a business investment decision now, the world looks a lot less certain than it did six months ago in terms of global trade policy,” Jensen noted. As a result, he said, businesses are likely to take a “wait-and-see” approach to investment decisions during the ongoing trade tensions.

Alan Deardorff, a professor of international economics at the University of Michigan, said it’s not even clear that the prices of consumer goods will rise because of the tariffs. He noted that the import duties could hurt China’s economy to the point where its currency loses value, which would have the effect of making Chinese exports to the United States cheaper overall.

Negative impressions of the U.S.-China economic relationship have increased over the past two months amid the trade rhetoric emanating from Washington and Beijing.

Fifty-seven percent of voters in the recent poll said the economic relationship between the two countries has worsened in the past year. That’s up from 35 percent who said the same thing in a February survey measuring the opinions of 2,201 U.S. adults. The poll had a margin of error of plus or minus 2 percentage points.