For the fifth quarter in a row, America’s 10 most popular governors are all Republicans.

That’s according to the latest edition of Morning Consult’s Governor Approval Rankings, compiled from online surveys conducted with almost 275,000 registered voters from Jan. 1 through March 31. See our methodology here.

The top four in the rankings remain unchanged from the fourth quarter of 2017, with Govs. Charlie Baker of Massachusetts, Larry Hogan of Maryland, Kay Ivey of Alabama and Phil Scott of Vermont enjoying support from at least 65 percent of their constituents. New Hampshire’s Chris Sununu and North Dakota’s Doug Burgum rejoin the top 10 in lieu of Asa Hutchinson of Arkansas and Greg Abbott of Texas.

At the other end of the table, Gov. Dan Malloy (D-Conn.) is now the most unpopular governor, replacing former Republican Govs. Chris Christie of New Jersey and Sam Brownback of Kansas, who traded the dubious distinction during the past two years. Malloy isn’t seeking a third term in office, but five governors in the bottom 10 are on the ballot in 2018: Bruce Rauner (R-Ill.),  Bill Walker (I-Alaska), Gina Raimondo (D-R.I.), Scott Walker (R-Wis.) and David Ige (D-Hawaii).

It’s Ige’s first time in the bottom 10, posting a net decline of 20 percentage points in the first quarter of 2018 compared to the previous three months and marking the biggest quarterly slide among all governors. He came under criticism for his handling of a Jan. 13 incident when an incoming missile alert was erroneously sent statewide to cellphones and broadcast on TV and radio. Thirty-seven percent of registered voters approve of Ige and 49 percent disapprove of him as he looks to ward off an Aug. 11 primary challenge from U.S. Rep. Colleen Hanabusa.

Rauner dropped 10 percentage points in the first three months of the year. He emerged victorious in a March 20 primary contest against state Rep. Jeanne Ives, winning by almost 3 points. Three in 5 Illinois voters disapprove of Rauner’s job performance as he looks to hold off Democratic candidate J.B. Pritzker, a billionaire philanthropist and venture capitalist, in November. 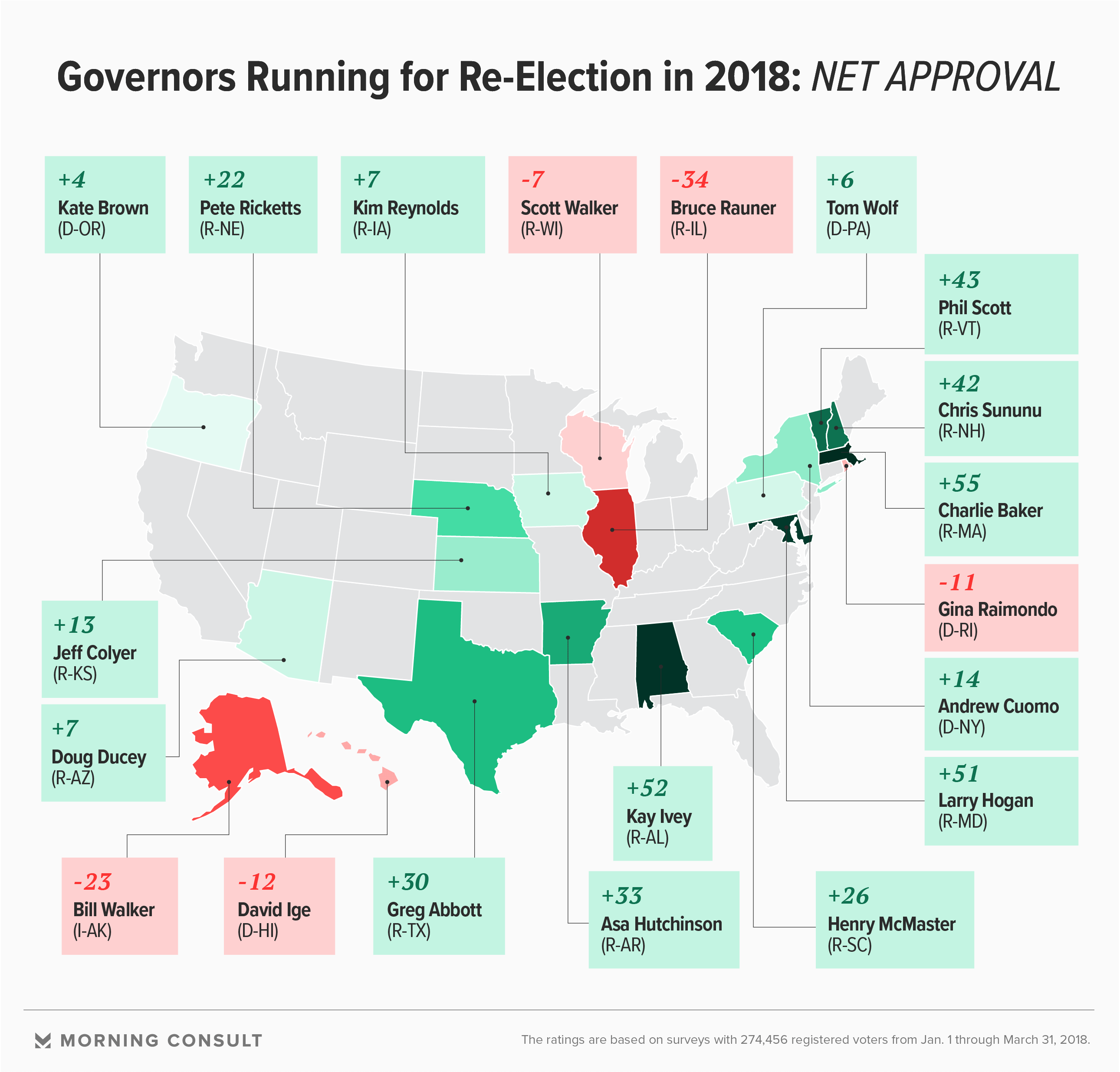 With 44 percent of Virginians approving of his job performance and 26 percent disapproving, Gov. Ralph Northam (D-Va.) is the most popular of the first-termers. In New Jersey, voters were nearly split on Democrat Phil Murphy’s first three months in office: Thirty-seven percent approve of his job performance, while 33 percent do not.

The lone new face among Republicans, Jeff Colyer in Kansas, is still largely unknown in the state after taking over from Brownback on Jan. 31 following the former governor’s U.S. Senate confirmation as ambassador for religious freedom in the Trump administration.

Forty-five percent of registered voters in Kansas said they had no opinion of Colyer, who is expected to seek a full term in the upcoming gubernatorial election, while 34 percent approve and 21 percent disapprove of him.

Gov. Jim Justice’s popularity remains volatile in West Virginia. After posting a 13 point surge in popularity between the third and fourth quarters of 2017, the Republican governor dropped 10 points during the first quarter of 2018. Justice, a former Democrat who switched parties in August, is backed by 42 percent of voters, while 44 percent disapprove of him.

It was a tough quarter for Gov. Eric Greitens (R-Mo.), who was indicted Feb. 22 for felony invasion of privacy and faces an ethics probe as a result of a blackmail accusation first brought to light by a former paramour’s ex-husband. Greitens dropped 18 percentage points and began the second quarter of 2018 with his approval rating 1 point in the black — 40 percent approval versus 39 percent disapproval. A jury trial is scheduled for May 14.

Correction: A previous version of this story misstated the state affiliation of Burgum and Sununu, and misstated the approval numbers for Ivey and Mead.