Query reflects concerns from environmentalists and landowners, among others 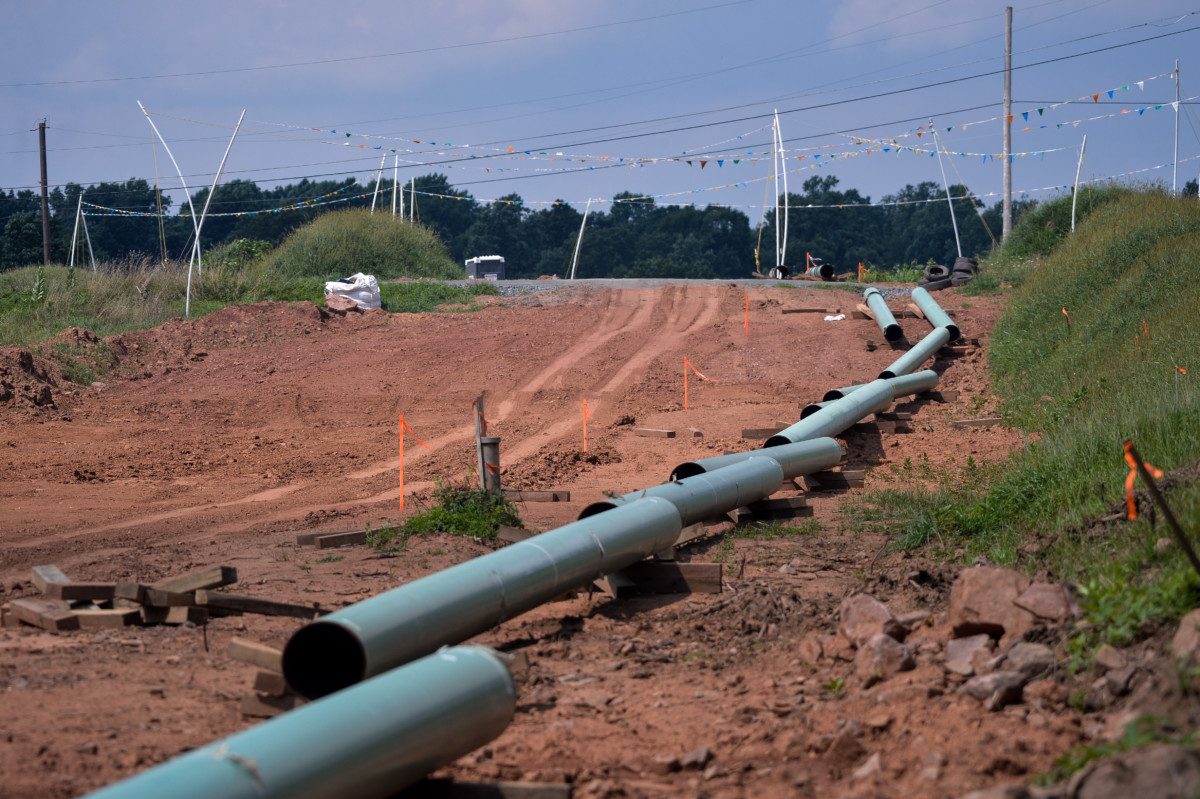 Sections of pipe sit on top of wooden supports at a construction site for a natural gas liquids pipeline project in Pennsylvania. (Charles Mostoller/Bloomberg)
By Jacqueline Toth

Federal regulators began Thursday an official process to consider whether and how the government should update its policy for approving new interstate natural gas pipelines  — procedures which haven’t been updated since 1999.

The commission said the questions posed in the notice reflect concerns it has heard from the public, in court and elsewhere. Those concerns have centered on whether it is adequately considering the impacts of new pipelines on elements like transmission, customer costs, the environment and surrounding communities.

The policy statement has guided the commission when it evaluates if a particular project is needed and if it is in the public’s overall interest. Under the policy, FERC has given especial weight to whether companies have already signed on to buy the gas from the proposed pipeline, through either a contract or precedent agreement.

FERC Chairman Kevin McIntyre, a Republican nominated by President Donald Trump, announced in December the commission would “take a fresh look at all aspects of” its pipeline policy statement.

A lot has changed in the industry since 1999, McIntyre reiterated Thursday.

“I believe that good governance calls for transparently considering whether policies currently in place remain effective and to look for opportunities to make improvements, if any can be made,” to ensure the commission is reviewing pipelines in the best way, he said at the open meeting.

Under the notice of inquiry, FERC will seek comments on four general areas, including over how it decides if a given pipeline project is needed, which includes how the commission considers precedent agreements and contracts.The commission also wants input into its consideration of landowners’ interests and eminent domain; how it takes the environmental effects of a project into account; and how the commission can improve the efficiency of its determination process.

McIntyre emphasized that the review process moving forward does not mean that FERC will or will not ultimately choose to update the policy.

Pipeline builders have backed the current policy, under which FERC approved more than 400 pipelines from 1999 to 2016. Don Santa, president and chief executive officer of the Interstate Natural Gas Association of America, the trade group for the interstate gas pipeline industry, said in a statement Thursday that the existing policy “has served the nation well” in allowing for the expansion of pipelines. Upon McIntyre’s announcement in December, Santa said the current policy provides FERC with “a robust framework” in determining the need of new pipelines.

Environmental groups, however, have accused FERC of acting as a rubber stamp for new, large pipeline projects and have pushed for a revised policy statement. FERC, they maintain, should give less weight to precedent agreements, which are often made with affiliate companies of the pipeline developers. Environmentalists also hope to see the commission consider more closely the climate impacts of approving new pipelines.

A coalition of 11 attorneys and officials from 11 organizations, including the Natural Resources Defense Council and Sierra Club, sent McIntyre a letter Wednesday saying that the certification policy as it stands “incentivizes – rather than limits – overbuilding and poses significant economic and environmental risks,” and requests that FERC update its pipeline review procedures.

Landowners have also raised concerns with the process. Once a pipeline project gets certified from FERC, the builder gets the right of eminent domain and can go to court if necessary to build across privately owned land, if easement or right-of-way negotiations fail.

While the official notice of inquiry was not yet made available by mid-afternoon Thursday, Caroline Wozniak, a senior policy adviser at FERC, said during a presentation at the open meeting that the notice will state that the commission will keep processing natural gas pipeline applications under the 1999 policy statement during the review process.