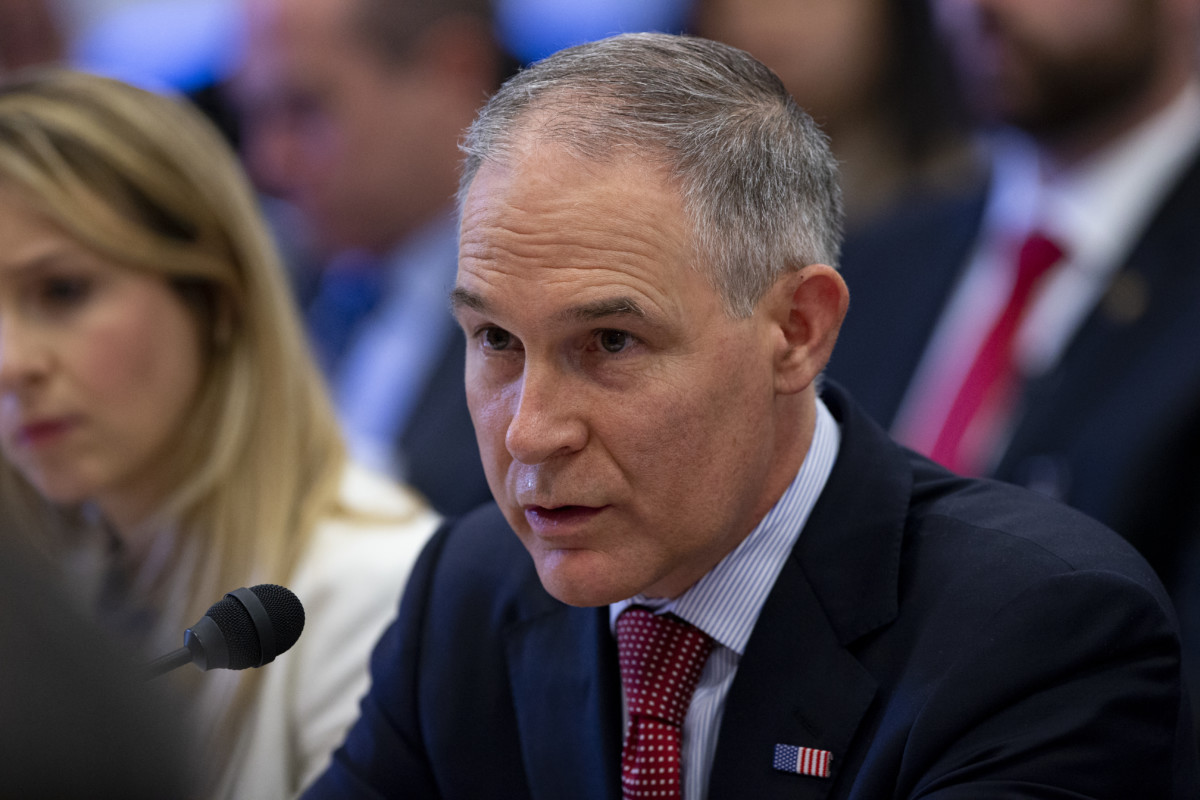 Environmental Protection Agency Administrator Scott Pruitt testifies before the House Appropriations Committee during a hearing on the 2019 fiscal year EPA budget at the Capitol on April 26. (Photo by Alex Edelman/Getty Images)
By Jacqueline Toth

Public perception of a White House in chaos continued to grow over the last month and a half, according to the latest Morning Consult/Politico poll, at the same time that more voters — including Republicans — soured on Environmental Protection Agency Administrator Scott Pruitt amid some of the controversies surrounding his leadership.

In an April 26-May 1 survey of 1,991 registered voters, 62 percent say the administration is running somewhat or very chaotically, a rise of 4 percentage points from a March 15-19 poll and 8 points from a March 1-5 poll. Those who say they think the administration is running very well or somewhat well fell to 32 percent from 36 percent in the mid-March poll. 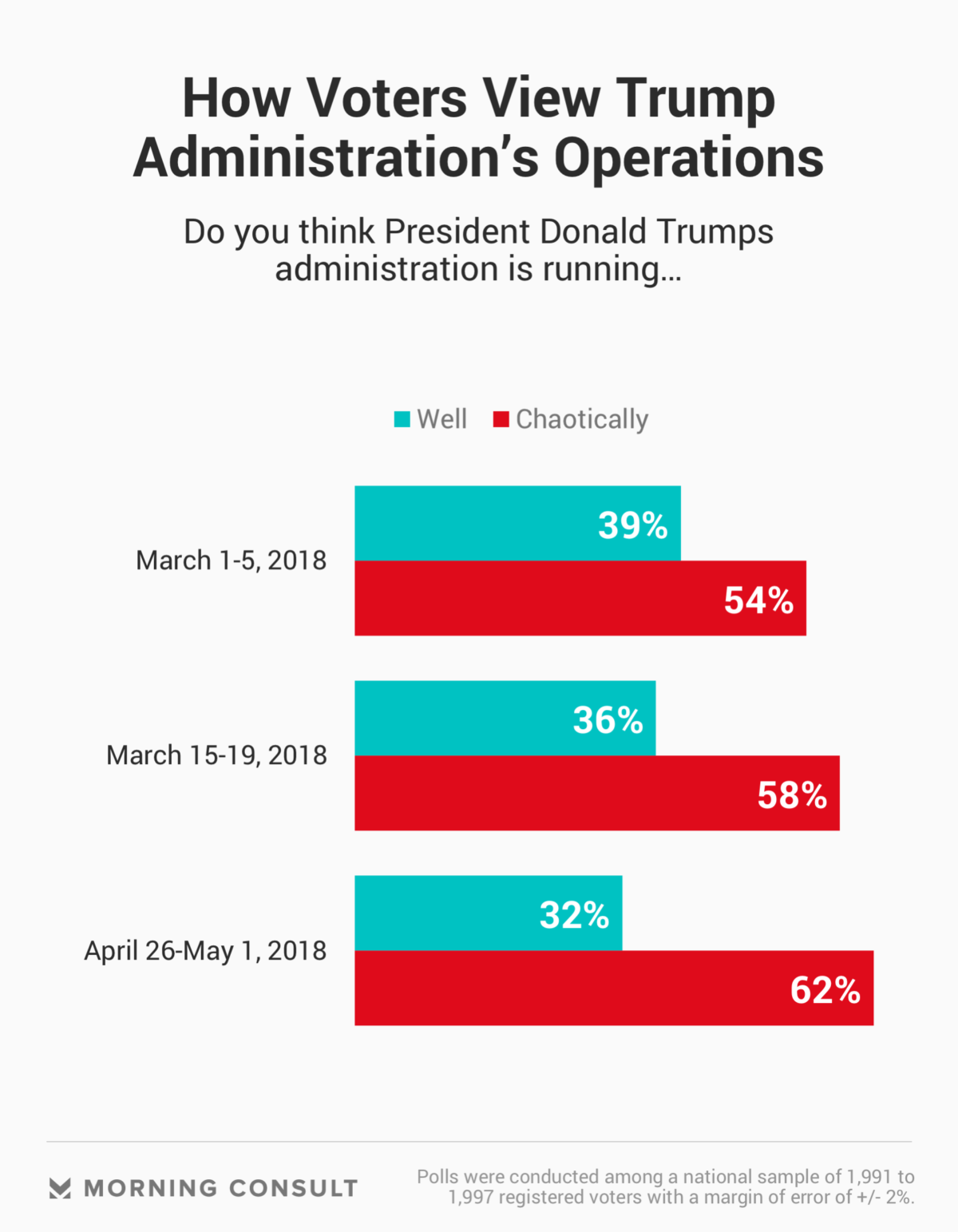 Since the March 15-19 poll, Democrats publicly knocked President Donald Trump for failing to properly vet Dr. Ronny Jackson after David Shulkin’s March 28 ouster as Veterans Affairs secretary. Jackson withdrew his nomination for the post after allegations of misconduct while he was the White House physician.

Shulkin’s removal was just one in a long line of hirings and firings in the administration. Kathryn Dunn Tenpas, a nonresident senior fellow in the Governance Studies program at the Brookings Institution, found that the resignations, firings and promotions within the White House and executive branch during Trump’s first year in office numbered twice that of the Reagan administration’s and triple that of Obama’s.

The Morning Consult/Politico poll ran in the days following Pruitt’s testimony on April 26 before two House committees, when he assured lawmakers the EPA is “inspiring confidence in the American people that” the government is working for them.

But over the last month, as Pruitt faced an increasing barrage of media reports alleging extravagant spending on things like his security and travel, his overall favorability as administrator took a hit.

The April 26-May 1 poll shows 32 percent of voters now say they hold a very unfavorable or somewhat unfavorable view of the administrator, an increase of 7 percentage points from the poll in mid-March, while 19 percent say they have a favorable view, a drop of 1 point from the prior poll.

Thirty-six percent of Republican voters said they looked favorably on Pruitt in the latest poll – an increase from 33 percent from mid-March. 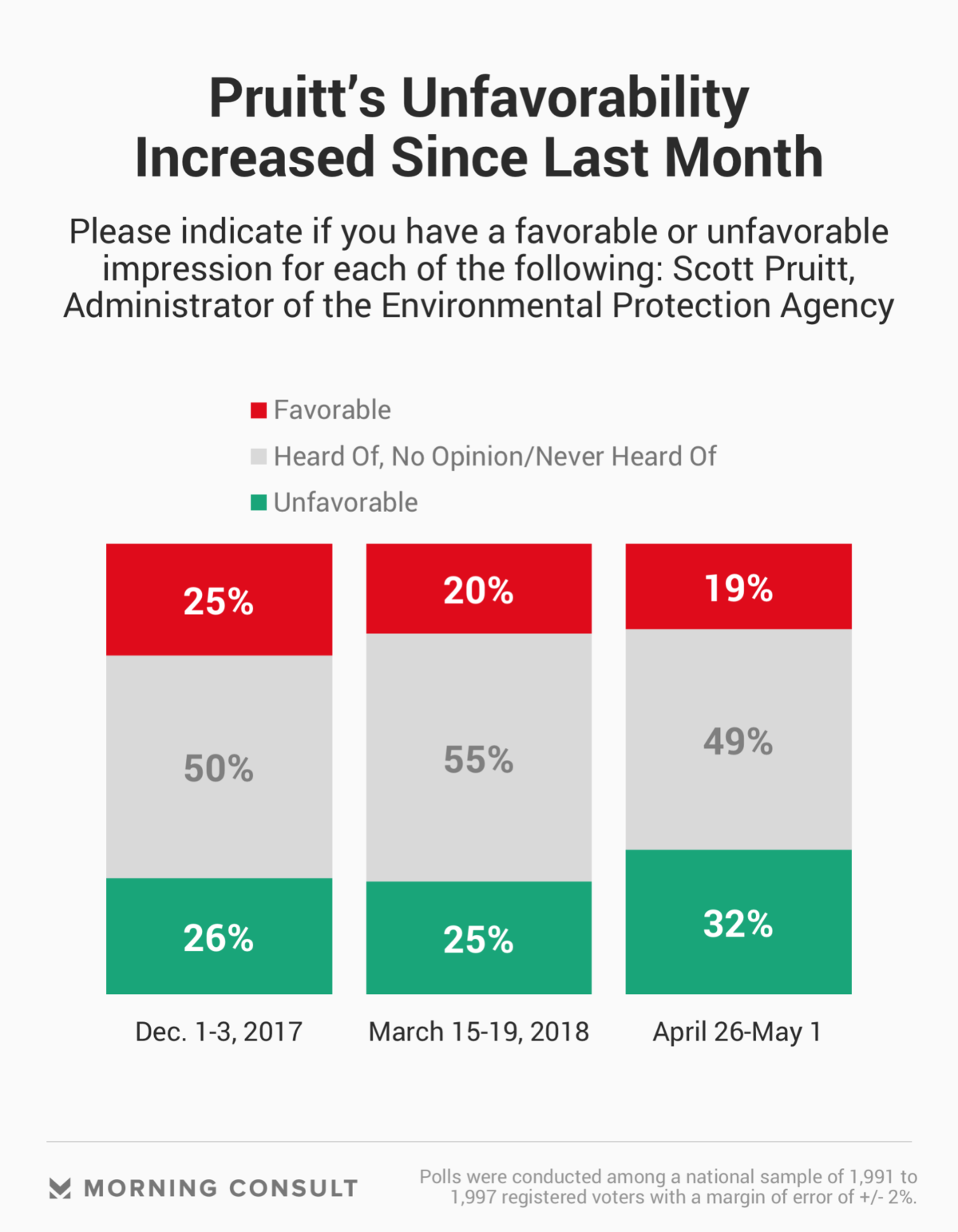 Because of the scandals surrounding Pruitt, more people have started to know who he is, said Melinda Pierce in a phone interview Monday. Pierce is legislative director of the Sierra Club, which has consistently opposed Pruitt’s efforts to roll back environmental regulations.

Forty-nine percent of voters in the latest poll said they have never heard of Pruitt or have no opinion on him, down from 55 percent in mid-March and 50 percent in a poll from Dec. 1-3, 2017.

“The thing that we tend to forget sometimes is that people have lives,” Thomas Pyle, president of the advocacy group American Energy Alliance who was also tapped to head up the Energy Department transition team under Trump, said in a phone interview Monday. People pay less attention to the “Washington scandal circuit” than others may think, he said.

At last week’s Environment Subcommittee hearing, a plurality of panel Republicans focused less on Pruitt’s alleged ethical lapses than on the policies he has implemented as administrator — many of which Republicans have sought to effect through legislation. Pruitt is “not the first person to be the victim of, for lack of a better term, Washington politics,” said former House Energy and Commerce Chairman Joe Barton (R-Texas).

EPA spokesman Jahan Wilcox declined to comment on Monday in response to whether the allegations against Pruitt reflect poorly on the administration and whether Pruitt still has Trump’s support. On Tuesday, a White House spokesperson pointed to recent statements from White House press secretary Sarah Huckabee Sanders that the White House is reviewing the allegations against Pruitt but that the EPA administrator has done a good job of implementing Trump’s policies.