Among voters overall, 49% say she should be replaced as party leader in the House

Fewer Democratic voters say Nancy Pelosi should remain party leader in the House, and more say she should be replaced, than did almost a year ago, according to polling.

The most recent Morning Consult/Politico survey – conducted May 3-5 among 1,992 registered voters – found that 38 percent of Democrats say the California Democrat should remain party leader in the chamber, while 32 percent say she should be replaced. In a June poll, 41 percent said Pelosi should stay in her leadership post, and 27 percent said she shouldn’t.

The margin of error for that demographic in the latest poll is plus or minus approximately 3.7 percentage points, and roughly 3.6 points in the June survey. 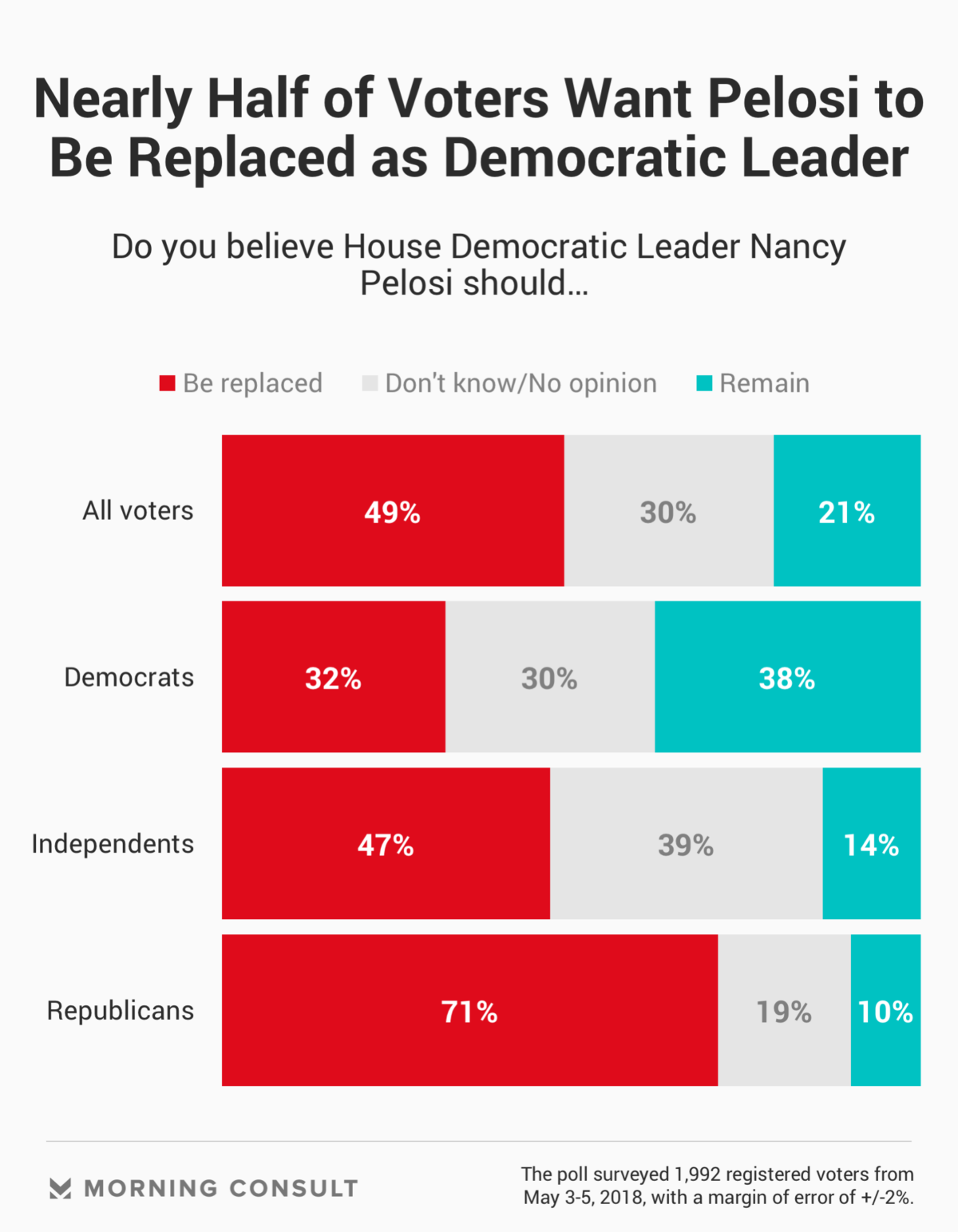 Republicans are renewing their efforts to make Pelosi’s presence a divisive issue as Democrats look to win control of the House in the November midterm elections.

“After nearly a year of non-stop attacks from desperate Republicans, Leader Pelosi’s numbers are not moving,” Drew Hammill, Pelosi’s deputy chief of staff, said in a Wednesday email to Morning Consult. “The GOP Pelosi strategy simply does not work.”

Overall, 49 percent of registered voters say Pelosi should be replaced, up from 43 percent who said the same in the June survey. Support for Pelosi retaining her position is now at 21 percent, down from 26 percent last year.

“We’re very thankful to have her in our lives,” said Corry Bliss, executive director of the Congressional Leadership Fund, a House GOP leadership-aligned group, in an interview Monday.

On Tuesday, Republicans pounced on comments Pelosi made at a public event about how the GOP was right to say she wants to roll back the tax cuts President Donald Trump signed into law last year. The National Republican Congressional Committee, focusing on competitive House races in places such as New York and Kansas, asked Democratic candidates to respond.

Speaking at Tuesday’s Politico Live event, Pelosi said Republicans attack her because they have “no positive message.”

Still, several Democratic candidates – such as Paul Davis, who is running in Kansas’ 2nd Congressional District, and Joe Cunningham, who is seeking the party’s nomination in South Carolina’s 1st District – have said they will not support Pelosi to lead the Democrats if they are elected, while others have distanced themselves from her in their messaging.

Pelosi offered her response to that approach at the Politico event: “Just win, baby.” 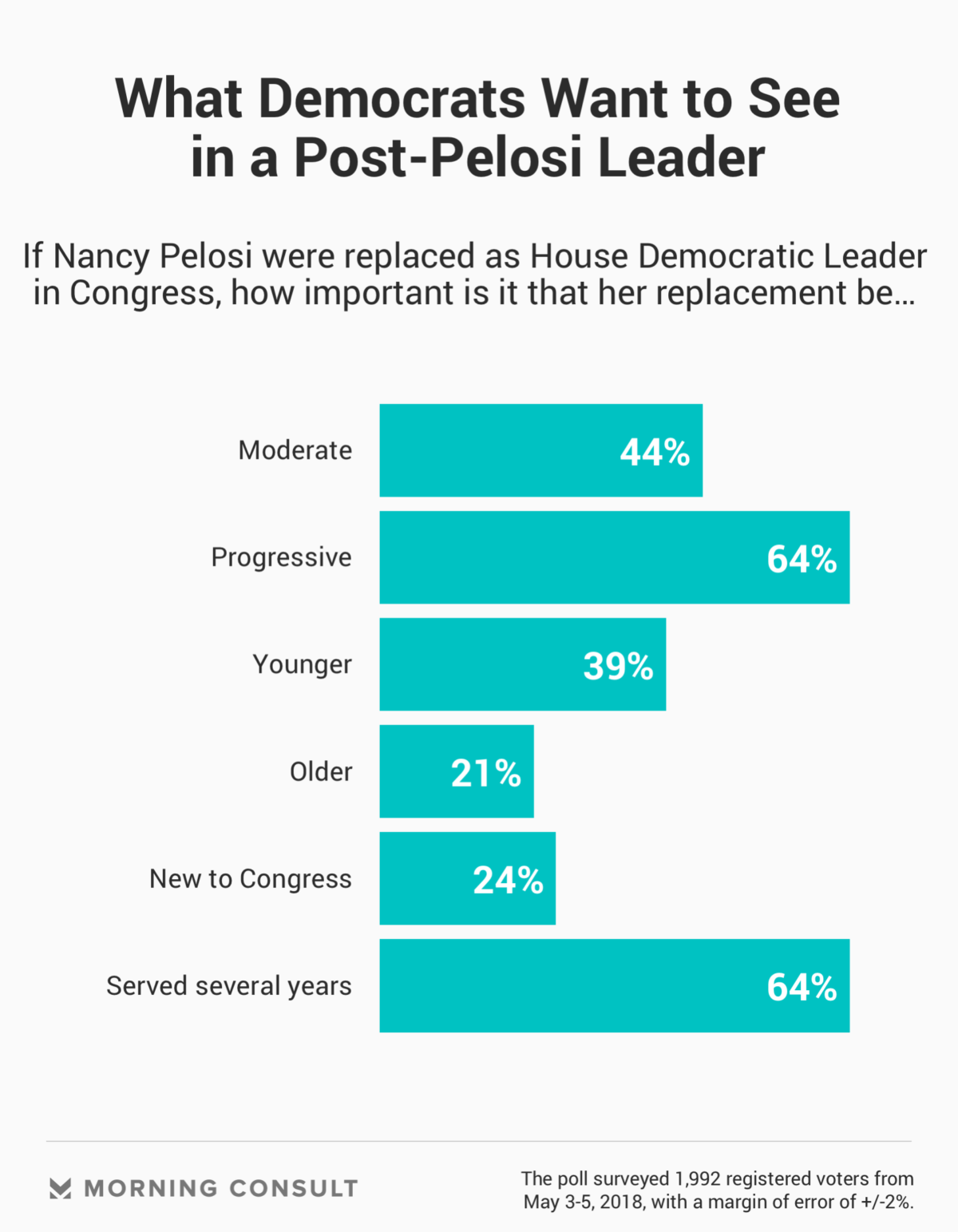 Jesse Hunt, a spokesman for the NRCC, said in a Monday interview, “The prospect of her becoming speaker is something that’s problematic because independents and Republicans disdain everything that she believes in.”

A 47 percent plurality of independents in the latest poll said Pelosi should be replaced, with 71 percent of Republicans agreeing.

Ian Russell – principal at Beacon Media and former deputy executive director and national political director at the Democratic Congressional Campaign Committee — said in an interview Tuesday that he expects to see Pelosi come up in Republican mail pieces and phone scripts to fire up Republican voters ahead of Election Day and “scare the hell out of them,” though he cast doubt on the overall effectiveness of that strategy.

“Midterm elections are about who is at 1600 Pennsylvania Ave., not who is the House minority leader or the future speaker,” said Russell, whose firm is working on almost a dozen House races this cycle.

Among voters overall, 25 percent expressed a favorable view of Pelosi, while 49 percent had an unfavorable view of her. That makes her the most unfavored lawmaker among the top party leaders in each chamber: Senate Minority Leader Chuck Schumer (D-N.Y.) is viewed unfavorably by 36 percent of voters, with 46 percent taking the same negative view of both Speaker Paul Ryan (R-Wis.) and Senate Majority Leader Mitch McConnell (R-Ky.).

Related: More Than Twice as Many GOP Voters as Democrats Back Changes to NAFTA

This story has been updated to included additional comments from Russell.