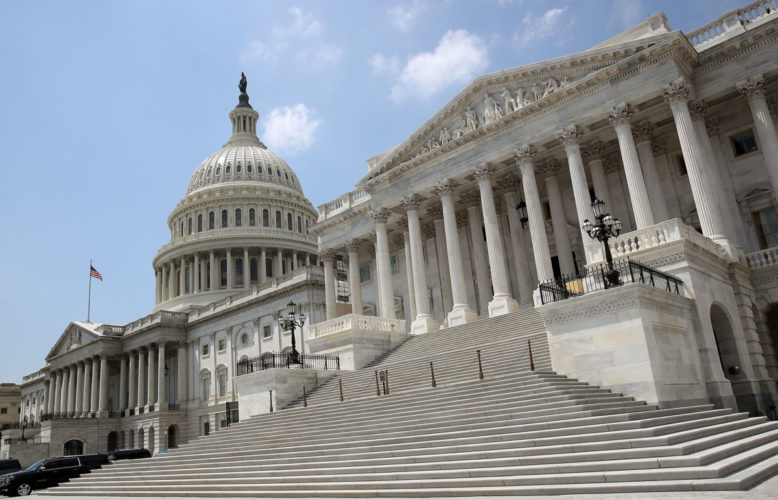 The Senate side of the US Capitol. (Photo by Mark Wilson/Getty Images)
By Cameron Easley

President Donald Trump recently alluded to the possibility of a government shutdown in the fall — a little more than a month before the November midterm elections — if he doesn’t get congressional funding for construction of his proposed border wall with Mexico. Senate appropriators are pushing back.

“It’s not a good idea to shut the government down, period,” Senate Appropriations Committee Chairman Richard Shelby (R-Ala.) told reporters Monday at the Capitol. “It’s never helped the Republicans and it hasn’t helped the Democrats.”

Another Republican appropriator, Sen. John Kennedy of Louisiana, said that while it’s important to fund the border wall, he doesn’t necessarily agree that a shutdown is the right move.

“We ought to be able to work things out on the border wall without shutting down the government,” he told reporters on the Hill Monday.

Government funding expires Sept. 30, the last day of fiscal year 2018. During a May 5 event in Cleveland meant to promote the GOP’s tax bill, Trump made a veiled threat to shut down the government over wall funding.

“Now we are fixing and building walls,” he said. “But we need much more money.”

“We’re going to do the job,” he added. “And we may have to close up our country to get this straight, because we either have a country or we don’t.”

Those public remarks came a day after Trump tweeted: “We are going to demand Congress secure the border in the upcoming CR. Illegal immigration must end!”

The president’s recent comments came a year after he first threatened to shut down the government over funding to build the border wall — a signature 2016 campaign promise that played well with the GOP base.

Republicans are more likely than Democrats and independents to place a premium on security issues. In the latest Morning Consult/Politico survey, 32 percent of GOP voters said issues such as border security, terrorism and foreign policy were top of mind when casting votes for federal office, compared with 11 percent of Democrats and 17 percent of independents who said the same.

Among voters who prioritized security as their top voting issue, congressional Republicans hold a 42 percentage point edge over Democrats on immigration policy.

While Republicans control Congress and the White House, any bill that would keep the government open into fiscal year 2019 would require support from Democrats in the Senate, where Republicans hold a 51-49 majority.

A government shutdown under a GOP-controlled Washington could be politically perilous, said Nathan Gonzales, a nonpartisan analyst who publishes Inside Elections.

“President Trump and Republicans could try to use a government shutdown over border wall funding to energize the Republican base on one of the President’s core issues,” he noted in a Tuesday email to Morning Consult. “But there’s significant risk for the party in power looking so dysfunctional with the midterm elections looming.”

“Many Republicans have such a low view of government that they don’t care if it shuts down,” he added. “But I think it’s a different story for independents who are more open-minded about electing a Congress that will be a check and balance on the President.”

Morning Consult/Politico polling conducted during the January shutdown — which was led by Democrats who unsuccessfully pushed for deportation protections for recipients of the Deferred Action for Childhood Arrivals program — suggests Trump could take more of the blame.

Sen. Chris Coons (D-Del.), a member of the Senate Appropriations Committee, said voters would blame Trump for a shutdown, especially since the president refused to accept a deal earlier this year that would have fully funded his border wall request in exchange for a path to citizenship for 1.8 million “Dreamers” — people who were brought to the country illegally as children, often with their parents.

“One of the more frustrating things about an important issue like border security and the status of Dreamers is the unevenness and unpredictability of where President Trump will go,” Coons said in an interview Monday. “I find it hard to believe that he’s now going to threaten to shut down the government of the United States because he somehow can’t get things that have already been offered to him — repeatedly.”