The idea is simple enough: Be the last person standing. On an island. Where everyone is trying to kill each other.

This is the concept behind Epic Games Inc.’s “Fortnite: Battle Royale,” a campy survival video game that has swept the country.

“It is basically a phenomenon,” said Randy Nelson, head of mobile insights at the market analyst firm Sensor Tower, in an interview May 2. He pointed to teens and young adults as the game’s loudest audience.

“Fortnite: Battle Royale” has been available for fewer than eight months and already has a player base of at least 45 million, bringing in 3.4 million concurrent players for one epic day in February. Even Marvel Studios LLC is getting in on the action, featuring “Avengers: Infinity War” villain Thanos in the game for a limited time.

“Fortnite: Battle Royale,” currently available on iOS, PC, PlayStation 4 and Xbox One, is seeing tremendous growth, earning $223 million across all platforms in March alone, a 73 percent jump from February, according to the market research company SuperData Research Holdings Inc. (Privately held Epic Games does not report revenue figures and declined to comment for this story.)

This is thanks in large part to its success on mobile: Sensor Tower estimates that the game has brought in $50 million since its invitation-only launch March 15 on the iOS platform, which was expanded to all users of certain iPhones.

“This is definitely the largest mobile sensation since Pokémon Go,” Nelson said.

Such revenue is especially eye-opening since “Fortnite: Battle Royale” is free. Its revenue comes from in-game purchases, which are purely cosmetic and do not improve odds to win.

The runaway success of “Fortnite: Battle Royale” is impressive on its own, but experts say the way Epic has embraced mobile gaming is blazing a trail for the rest of the industry. Not only does mobile lower the barrier of entry, but its platform allows for more impulsive, emotional purchases — ideal for in-game purchases. “Fortnite: Battle Royale,” released in September 2017 as a game mode for the larger sandbox survival game “Fortnite,” has a straightforward structure: Players are dropped onto an island, and the last person standing wins. Weapons and other goodies are scattered about, and players can build structures from found or harvested materials. There’s also a storm circling the island that progressively shrinks the usable game space and reduces the health of any players caught inside it.

The game imitates the “battle royal” mode of another game — “PlayerUnknown’s Battlegrounds,” commonly known as PUBG — but has crushed its inspiration in terms of mobile revenue: “Fortnite: Battle Royale” earned $3.7 million in its first week on iOS outside of China, according to Sensor Tower estimates, compared to PUBG’s $700,000.

Epic Games made a few important changes in its adaptation of PUBG. The first was making “Fortnite: Battle Royale” free.

“If you are a novice, then that free-to-play structure is going to be a more attractive one,” said Shira Chess, an assistant professor in entertainment and media studies at the University of Georgia, in an interview May 1. 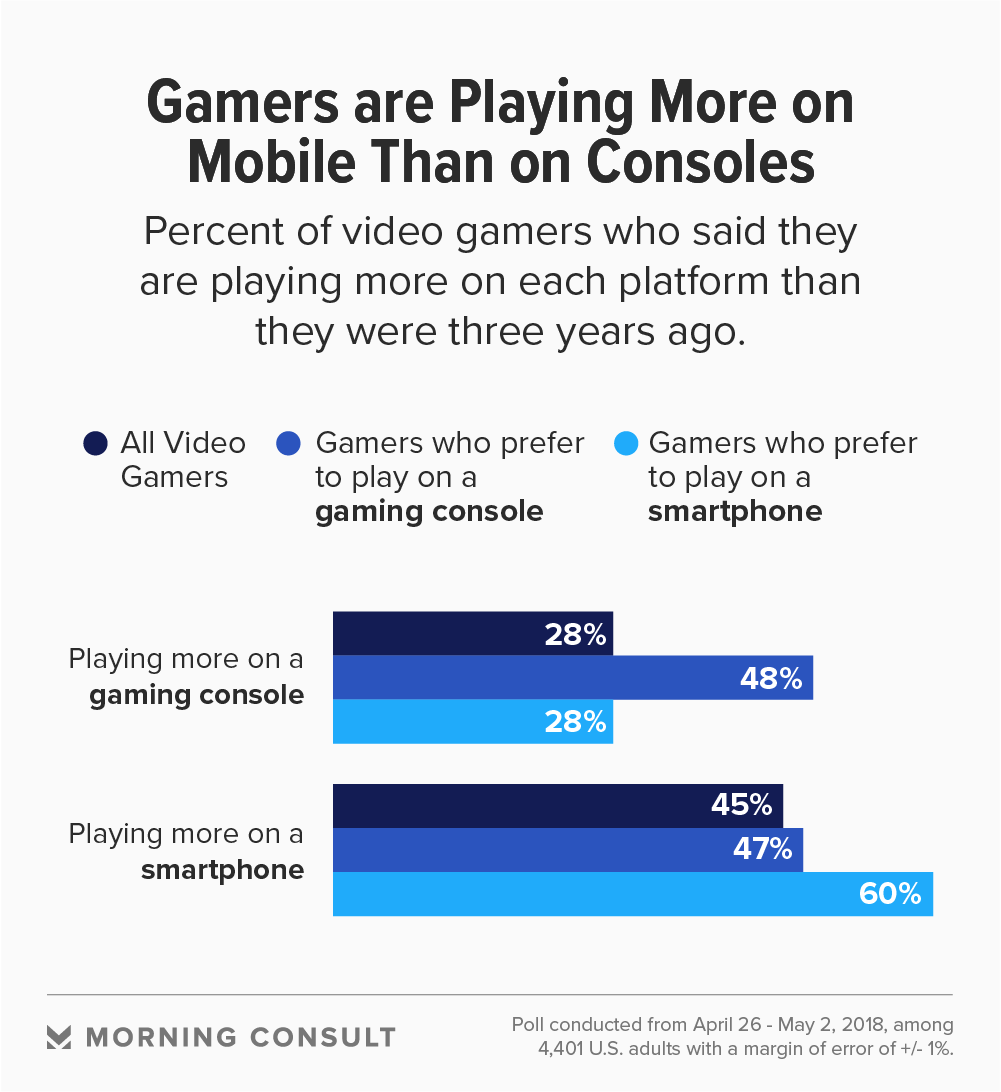 Mobile gaming is on fire. It’s gone from making up just 9 percent of the gaming industry’s revenue in 2012 to constituting 30 percent of it in 2017.

Even gamers who prefer playing on consoles were just as likely to say they are playing more on mobile as they are on their console. The April 26-May 2 poll was conducted among 4,401 U.S. adults, with a margin of error of 1 percentage point.

“Mobile gaming is as successful as it is because it is something that can be done in interstitial moments,” Chess said. “It’s a way to integrate play into your life if you don’t typically have a lot of time for play.”

IPhone users in the United States spent an average of $58 on in-app purchases in 2017, per a Sensor Tower analysis, a 23 percent jump from 2016. 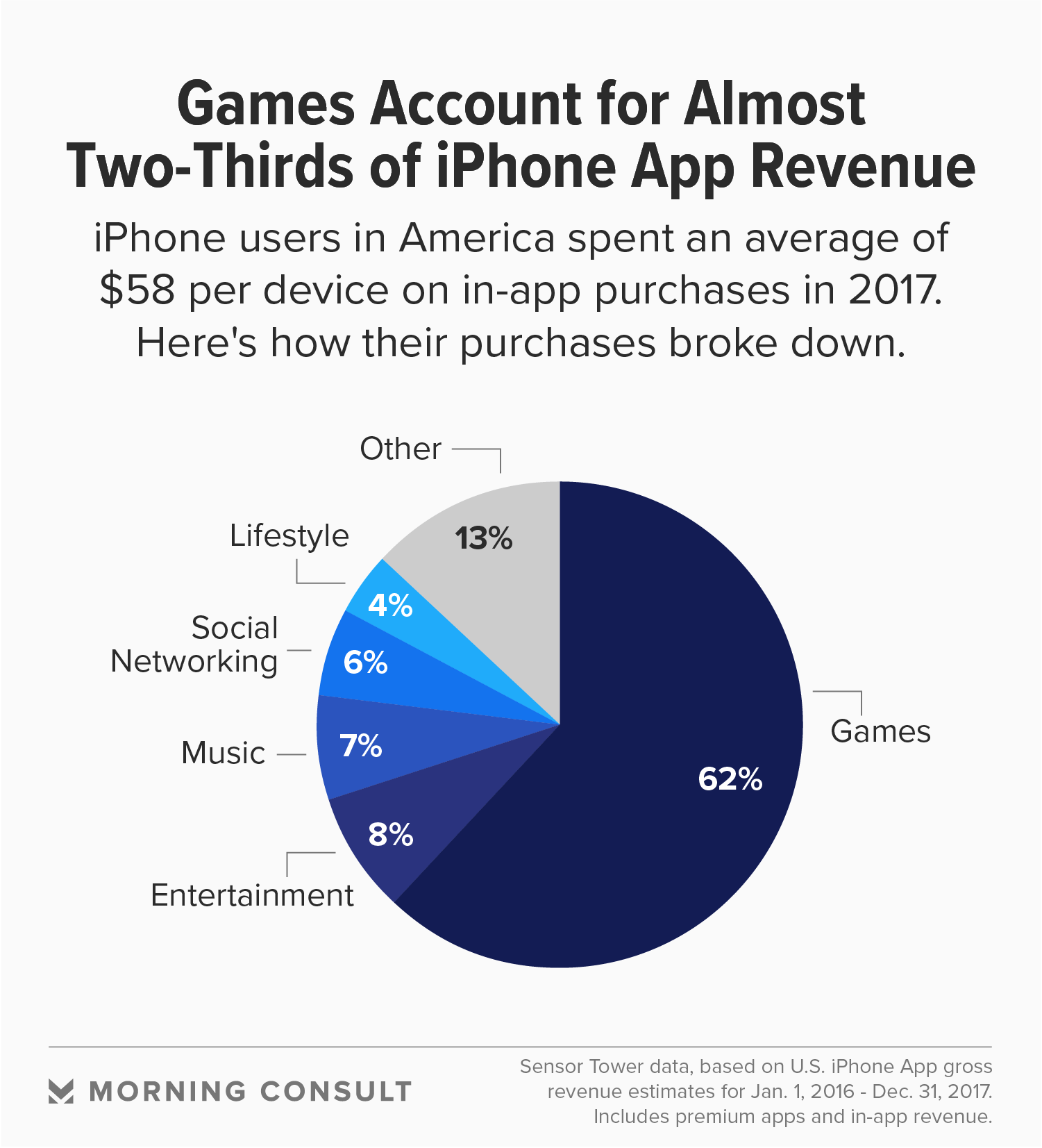 For “Fortnite: Battle Royale” players, these in-app purchases are just cosmetic: “skins” that change one’s appearance or “emotes” that allow avatars to dance, for example.

“These are things that are not necessarily tied to the mechanics of the game themselves but something that could be related to the player’s self-identity,” said D. Yvette Wohn, an assistant professor at the New Jersey Institute of Technology who specializes in human computer interaction and social technologies.

“Especially if you’re spending a lot of time in the game, your character in the game becomes a part of your identity,” Wohn said in an interview May 2. “So why wouldn’t you want to spend money on clothes? Because that’s what you do offline, as well.”

Another element that experts said “Fortnite: Battle Royale” does well, that other games can’t seem to guarantee, is a seamless sync of in-game purchases. Items bought on the mobile version, which is an exact replica of the game on other platforms, instantly show up on players’ accounts on other platforms, to the delight of heavy multiplatform gamers.

But relatively few are opening up their wallets to deck out their avatars.

“The truth is most people don’t make in-app purchases, and it’s the vast majority of people who choose to play games for free,” Wohn said.

Indeed, just 7 percent of mobile gamers make up 66 percent of the industry’s total revenue, according to a December 2017 report from the research firm Electronic Entertainment Design and Research Inc.

More than half of mobile gamers spent nothing on their games.

To be sure, several experts predicted these proportions could shift as mobile gaming grows and as companies devote more effort to understanding new players’ psychology of buying.

Smartphones are a company’s dream for such purchases: A study published in September in the Journal of Retailing and Consumer Services found that smartphones could encourage more impulsive in-game mobile purchases.

“When you hold your smartphone in your hand, it’s like an extension of your body. It’s like part of you,” she said during an interview May 1. “The device is perceived as an emotional device, so the purchases are more emotional purchases.”

Related: Parents, Not Companies, Are Blamed for Smartphone Addiction Among Youths

Most in-game purchases in “Fortnite: Battle Royale” are only available for a limited time, encouraging impulse purchasing.

Experts also said the game’s aesthetics, paired with its lowered barrier of entry on free-to-play mobile, could open up the game to new demographics.

“Fortnite: Battle Royale” is colorful and cartoonish. Player avatars are diverse in race, gender, age and size. Some are even otherworldly or bizarre, but not intentionally frightening.

There’s a sort of “magical realism” about the game, said Garrison LeMasters, a lecturer at Georgetown University’s communication, culture and technology program. Players kill players, yes, but there’s no blood or gore.

“The emphasis is certainly not on killing, even though that is exactly what happens,” he said. “I think that’s probably appealing to a lot of people that have found other first-person shooters a bit of a downer.”

This has the potential to appeal to a more female audience, experts said, and these players are already on mobile.

Nearly two-thirds (65 percent) of women ages 10-65 in the United States play mobile games, and 49 percent of mobile gamers are women, according to a Google Play and Newzoo white paper released in December 2017.

Women are also more likely to prefer smartphones as a gaming platform than men are: 64 percent vs. 38 percent.

But men are slightly more likely to spend money on the mobile platform: 55 percent of men spend money on mobile games, compared to 43 percent of female gamers, according to the Electronic Entertainment Design and Research report.

All gaming industry workers have their eyes on “Fortnite: Battle Royale” right now, several experts said. And they’re paying close attention to its free-to-play mobile success. The game’s Android version is in the works, and Sensor Tower predicts that it could take in more than $3 million per day on mobile when the Android user base reaches a level comparable to that of the iOS version.

This business model “is, at least for the moment, the future,” LeMasters said.

Related: The Brands That Stand Out Among Men, Women
Gaming