A majority of voters support Obama-era net neutrality rules, but almost 1 in 5 don’t think it was wrong for the Republican-led Federal Communication Commission to repeal the 2015 regulations.

Sixty percent of registered voters in a May 17-19 Morning Consult/Politico poll said they support net neutrality rules, while responses to a separate question found that 42 percent said repealing net neutrality was the wrong thing to do. The figures represent an 18 point gap between voters who support the rules and those who oppose their repeal.

Seventeen percent of voters said they oppose net neutrality rules, and 19 percent said repealing the regulations was the right call. 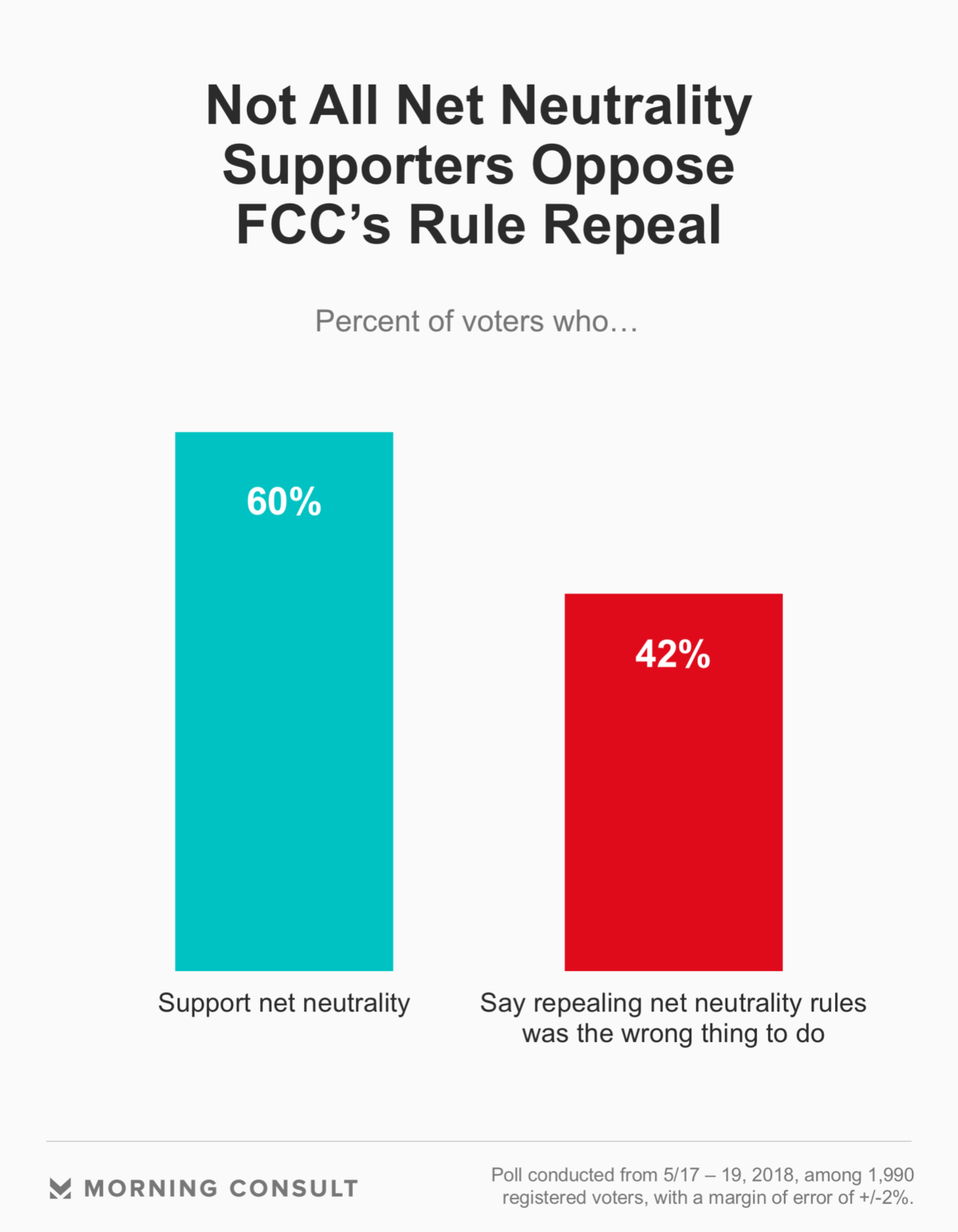 The nationwide survey of 1,990 registered voters has a margin of error of plus or minus 2 percentage points.

The FCC, led by Chairman Ajit Pai (R), voted along party lines Dec. 14 to reverse the 2015 Open Internet Order, which barred broadband providers from blocking, throttling or prioritizing online content. The final version of the new order, published in February, erased those prohibitions on internet service providers and instead required ISPs to disclose related information. Those new rules will take effect June 11.

“People in the United States generally are taught that government interference in business is bad,” Derigan Silver, professor of media studies at the University of Denver, said Tuesday in an email. “But they like what government regulation gets them. So they say they want ‘net neutrality’ but they don’t want the Open Internet Order.”

“They like the idea of net neutrality, but don’t really understand it or how it is enforced,” Silver added.

Support for net neutrality has grown by double digits since the FCC’s December vote. In a Dec. 14-18 Morning Consult/Politico poll, 49 percent of registered voters said they support net neutrality.

“The FCC is proposing dismantling the rules and removing basically all net neutrality rules and all oversight of broadband,” said Evan Engstrom, executive director at Engine, a San Francisco-based advocacy group for tech startups.

Starting next month, ISPs will “be allowed to charge access fees and block sites that didn’t pay” — which could hurt startups because “small companies would never be able to compete with large players who could afford those fees,” said Engstrom in a May 14 interview. He added that net neutrality rules helped U.S. startups thrive because “the costs of the technology decreases” and “there isn’t a gatekeeper charging for access to the networks.”

That viewpoint isn’t shared by Betsy Huber, president of the National Grange, who said in a May 17 interview that the 2015 Open Internet Order put too many restrictions on ISPs and ended up hurting the expansion of internet access into rural areas. The National Grange is a Washington-based organization that advocates for rural issues.

Huber said Congress needs to make laws that address the concerns of blocking and charging for priority services, instead of the federal government using a regulatory order that treats the internet like a monopoly.

If people feel that those services need to be regulated, “then Congress should pass legislation for that,” said Huber, adding that it shouldn’t be a regulation “that can change every administration.”

For Gus Hurwitz, professor of telecom law at University of Nebraska College of Law, the debate is not about whether net neutrality is good, it’s about how regulators implement protections to ensure ISPs don’t engage in problematic practices. He said in a Tuesday interview that while the 2017 order includes rules that require ISPs to be transparent about how they handle customer data, using the FCC is not an effective way to address net neutrality in general because “it’s unclear what Congress wants the FCC to do.”

“What we need is for Congress to step in and pass a law updating the FCC’s authority and giving the FCC clear instructions for how Congress wants the agency to approach ISPs,” said Hurwitz.