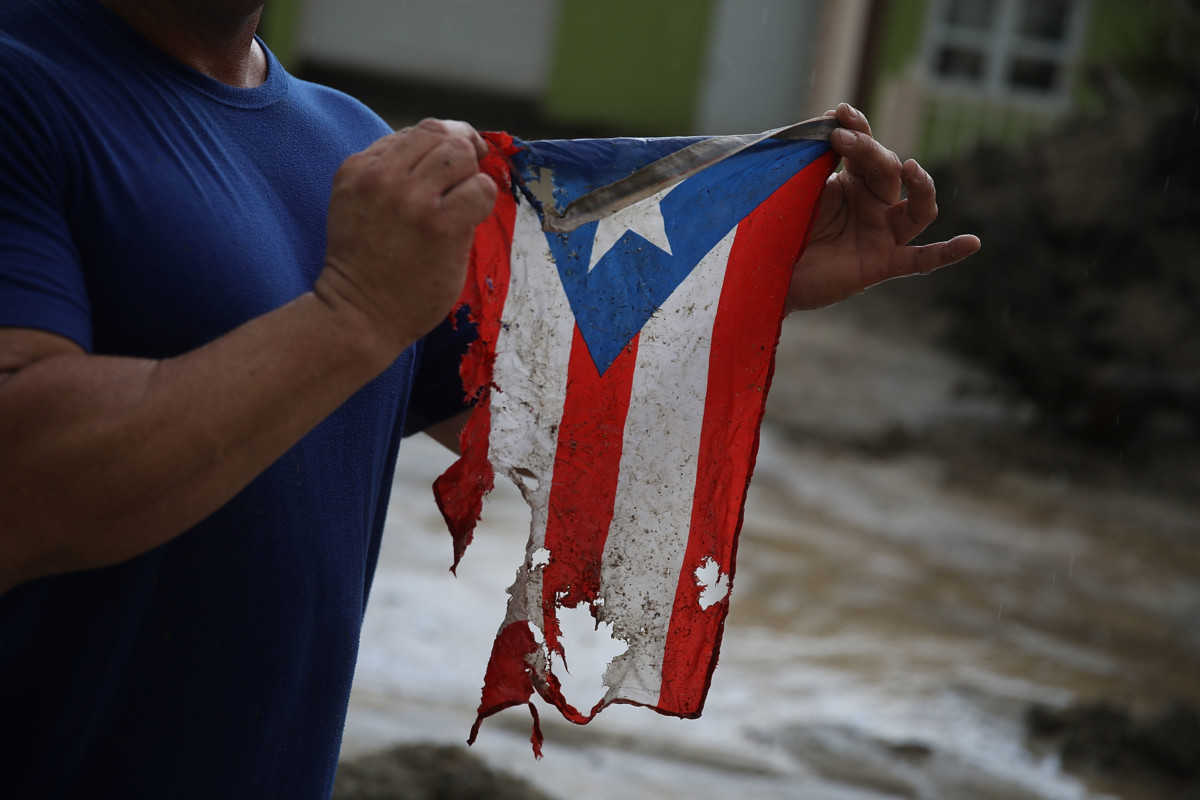 Jose Javier Santana holds a Puerto Rican flag he found on the ground after Hurricane Maria passed through on October 6, 2017 in Utuado, Puerto Rico. (Photo by Joe Raedle/Getty Images)
By Cameron Easley

Wall-to-wall cable news coverage of the cancellation of Roseanne Barr’s ABC show last week following her racist tweet about former President Barack Obama aide Valerie Jarrett prompted some observers to ask whether that ended up overshadowing another story: new public health estimates that say thousands of Puerto Ricans may have died as a result of Hurricane Maria.

A May 31-June 4 Morning Consult/Politico survey found that while the “Roseanne” news may have reached more Americans, there’s also been a sizable shift in public sentiment over the federal government’s handling of the crisis since the hurricane made landfall on the U.S. territorial island Sept. 20.

In terms of media saturation, respondents in the national, online survey of 1,990 registered voters were more than twice as likely — 60 percent versus 25 percent — to say they’d heard a lot about the “Roseanne” hullabaloo than news reports of a study estimating that the death toll from Hurricane Maria in Puerto Rico could exceed 4,600 people, roughly 72 times as much as the Puerto Rico government’s official death toll of 64.

An analysis of cable news coverage on May 29, the day both stories broke, by watchdog group Media Matters for America showed an estimated 10 hours were spent on the “Roseanne” story, compared with approximately 30 minutes on the Harvard University study.

Still, voters have grown more dissatisfied with the federal government’s response to the hurricane, according to Morning Consult/Politico polling.

In the most recent survey, 58 percent of registered voters said the federal government wasn’t doing enough in terms of disaster relief, up 12 points from a Sept. 29-Oct. 1 poll. The share of voters who said the U.S. government was doing an adequate job also dropped 15 points, from 37 percent last fall to 22 percent in the new poll.

Voters are also more critical of President Donald Trump’s handling of the natural disaster: Previously, voters were evenly split at 41 percent on the appropriateness of his response, but now 49 percent of voters describe it as inappropriate, compared with 26 percent who back it.

Those shifts in opinion dovetail with increased public recognition that Puerto Ricans are, in fact, U.S. citizens. Seven in 10 respondents in the new survey said people born in Puerto Rico are U.S. citizens, up 13 points from a Sept. 22-24 poll. 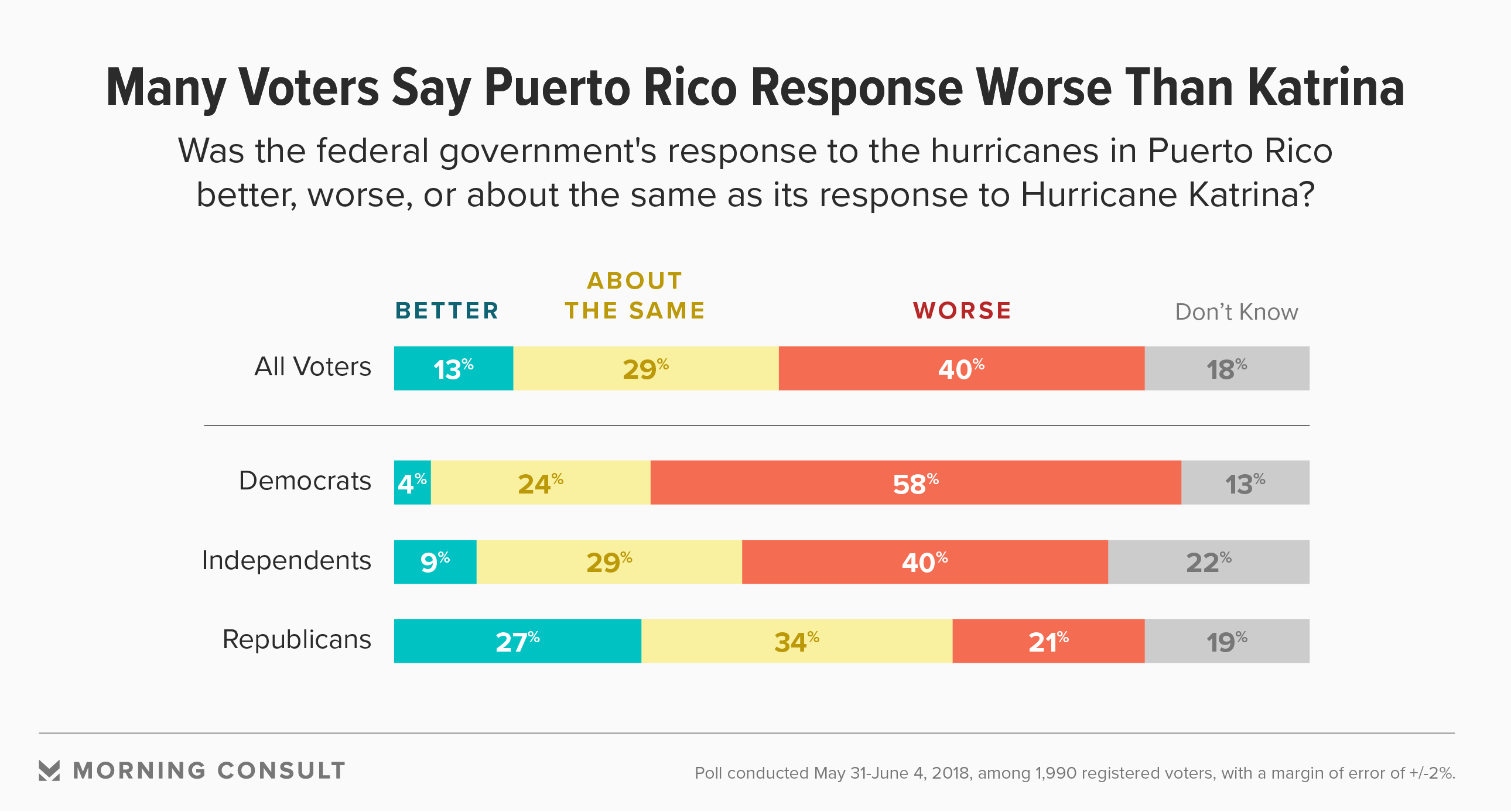 Democrats have seized on the latest news cycle to say the Trump administration has not done enough to help people in Puerto Rico, and to push for more resources ahead of a Sept. 30 deadline to keep the federal government funded.

“Eight months after the Trump Administration’s stunningly weak response, far too many of our fellow Americans in Puerto Rico lack power, adequate shelter and other basic necessities,” House Minority Leader Nancy Pelosi (D-Calif.) said in a May 29 statement. “Congress must ensure that families in Puerto Rico, the U.S. Virgin Islands and every community devastated by Maria receive the assistance they need, particularly as the next hurricane seasons approaches.”

The White House did not respond to requests for comment on criticism of its response or whether the administration plans to ask for more funding for Puerto Rico as part of spending negotiations.

A 40 percent plurality of voters said the federal government’s handling of fallout from Hurricane Maria was worse than the George W. Bush administration’s 2005 response to Hurricane Katrina, which made landfall in Louisiana and Mississippi and resulted in a death toll of more than 1,800 in those states. Twenty-nine percent graded the Trump administration’s response about the same, while 13 percent said it was an improvement.

Related: Voters Split on Whether Remarks Like Roseanne’s Mean Someone Is Racist
Donald Trump Film and TV Natural Disasters Race in America