Democrats Look to Press Advantage on Health Care in Midterms 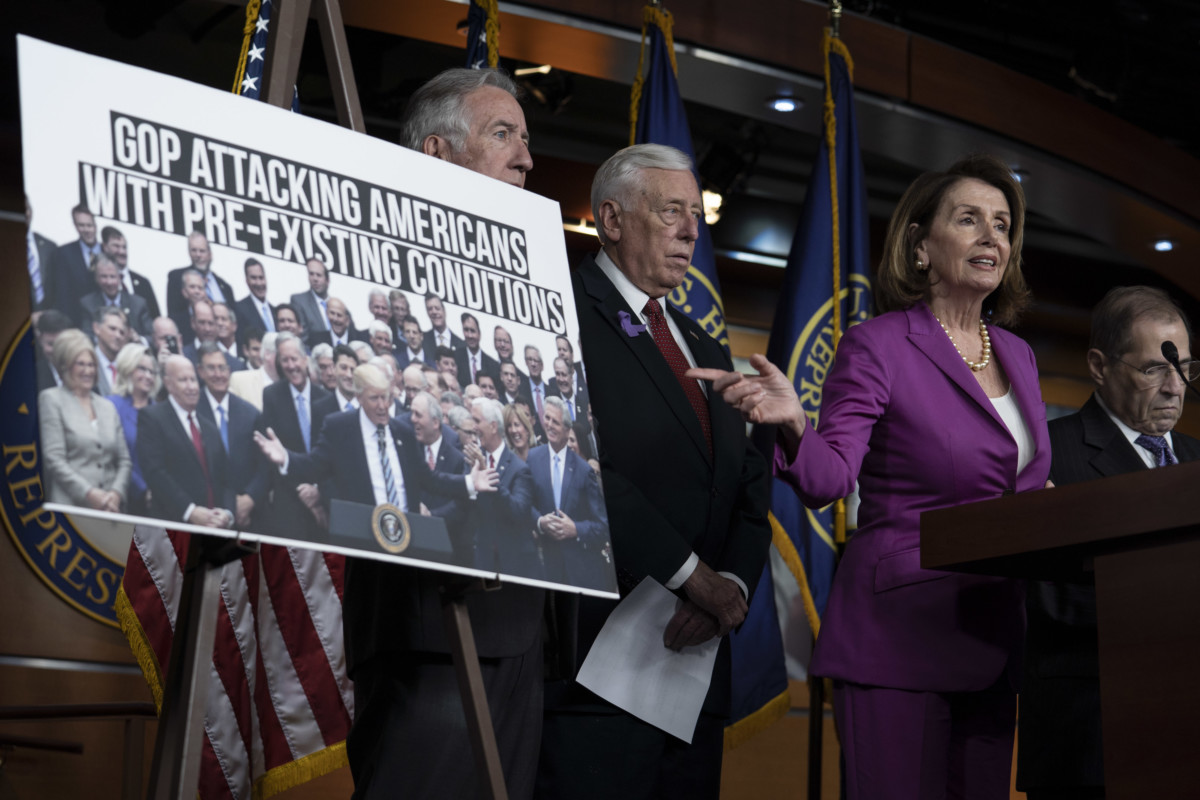 Since Republicans stepped away last year from their unsuccessful efforts to repeal and replace the Affordable Care Act, health care has faded as a top priority for voters.

But the Justice Department’s decision last week to not defend in court the legality of one of Obamacare’s most popular provisions — which provides protections for patients with pre-existing conditions — threatens to put health care back on the front burner.

That could be a political boon for congressional Democrats. According to the latest Morning Consult/Politico poll, conducted June 7-10 among a national sample of 1,994 registered voters, the party holds a 10 percentage point edge over Republicans when it comes to whom voters trust more when it comes to health care — Democrats’ most decisive advantage on any major policy topic. Republicans’ biggest edge is on national security, where they lead Democrats by 12 points, 45 percent to 33 percent. 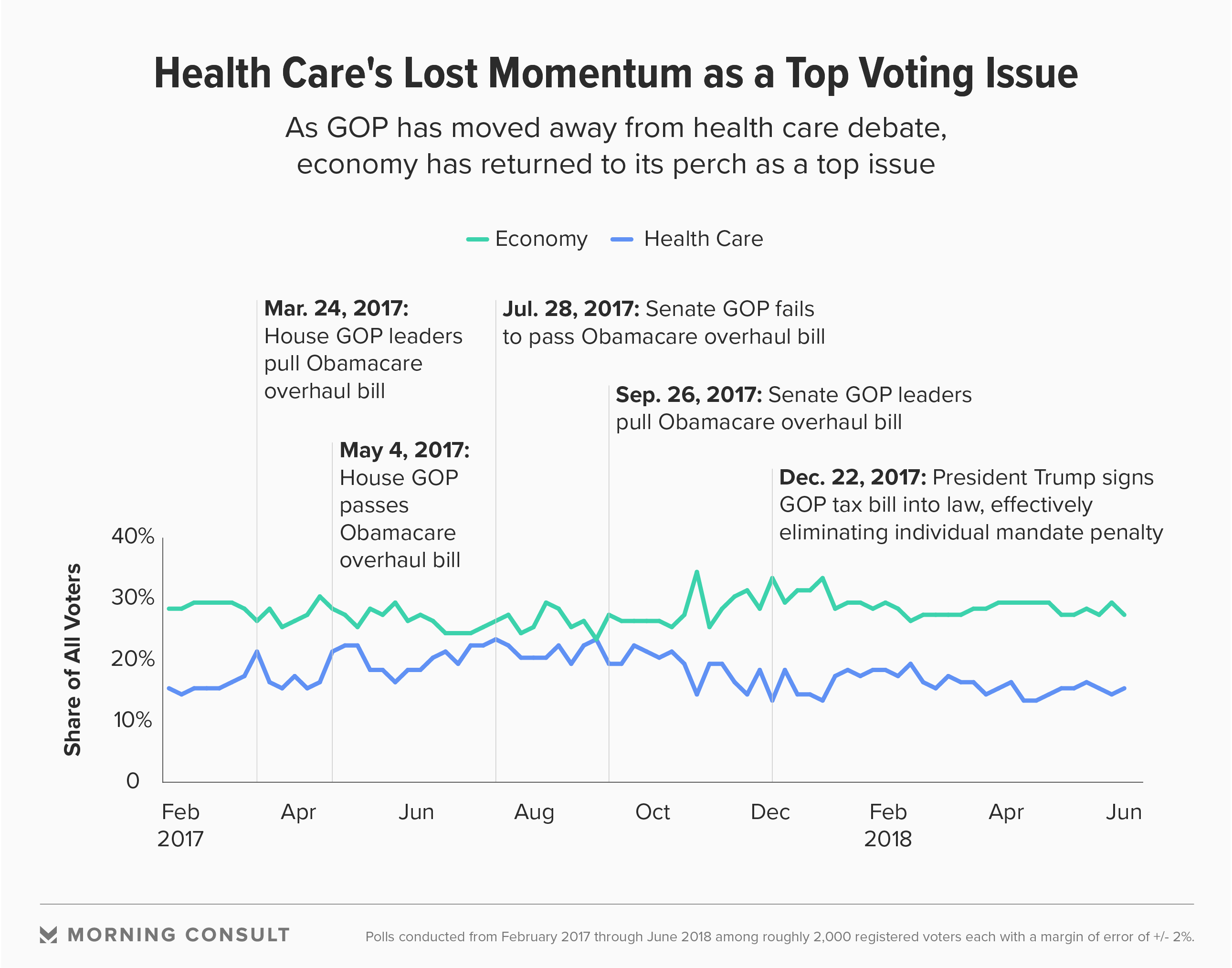 “This action is only going to remind voters that this administration, Republicans, are intent on undermining their access to affordable care, and this one is particularly aimed at people who have diabetes or asthma or any other pre-existing condition,” Sen. Chris Van Hollen of Maryland, the chairman of the Senate Democrats’ campaign arm, told reporters Monday, speaking about the recent Justice Department move. “It’s just a dagger at their access to health care.”

Sixty-seven percent of voters in a May 2017 survey supported protecting patients with pre-existing conditions from being denied coverage, compared with 19 percent who opposed it.

In remarks to reporters Tuesday, Senate Majority Leader Mitch McConnell sought to distance Senate Republicans from the implications of the administration’s brief on the lawsuit.

“Everybody I know in the Senate — everybody — is in favor of maintaining coverage for pre-existing conditions,” the Kentucky Republican said. “There’s no difference of opinion about that whatsoever.”

Even after Republicans in Congress stopped trying to overhaul Obamacare, Democrats have continued to make the case that the Trump administration is trying to sabotage the health care system. But Morning Consult/Politico polling shows that messaging effort has not moved the needle like it did during the health care debate last year. Democrats’ lead over the GOP in whom voters trust on health care peaked at 17 points in early August, and health care tied the economy as a top issue in late September, an event that hasn’t occurred since.

Many insurers are already seeking double-digit increases in premiums this year — partially, they argue, because of Republicans’ effective elimination of the individual mandate penalty. The insurance industry’s biggest trade group said the administration’s decision not to defend the lawsuit from 20 state attorneys general could raise prices further when new rates are announced in October, weeks before Election Day.

“Removing those provisions will result in renewed uncertainty in the individual market, create a patchwork of requirements in the states, cause rates to go even higher for older Americans and sicker patients, and make it challenging to introduce products and rates for 2019,” America’s Health Insurance Plans said in a June 7 statement.

“Insurers in state after state are announcing double-digit premium increases and blaming Republican health care policies for the increase,” he said. “Now, amazingly, the Trump administration is refusing to defend the constitutionality of protections for Americans with pre-existing conditions, turning its back on the most popular and most humane advancement in our health care system.”

He said Democrats will spend the next few months focusing on health care, “trying to get premiums down, costs down, better health care, not the deterioration we have seen under President Trump and the Republican congressional leadership.”

Even as Democrats press their advantage on health care, headwinds remain. The most recent survey shows voters still blame former President Barack Obama more than President Donald Trump for the state of the U.S. health care system by a more than 2-to-1 margin, 54 percent to 25 percent. That suggests Democrats continue to face obstacles in pinning the blame for the system’s current condition on Republicans.

“Democrats destroyed the health care system as we knew when they rammed Obamacare down our throats,” National Republican Congressional Committee press secretary Jesse Hunt said in a statement Tuesday.