Why GOP Leaders Fear a Discharge Petition on Dreamers

Despite substantial Republican support for deportation protections, the priority for action is low 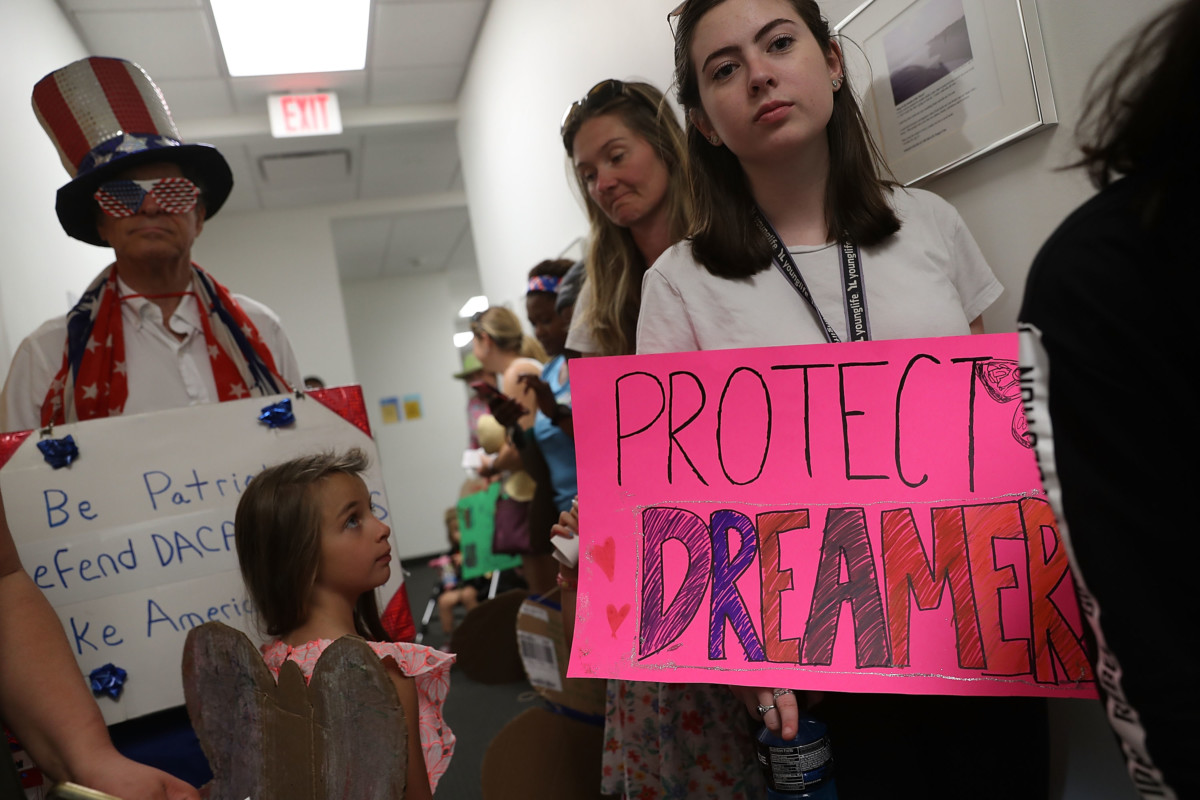 Lily Logsdon (R) joins with other activists in front of the office of Sen. Bill Nelson (D-Fla.) to ask him to help recipients of the Deferred Action for Childhood Arrivals as well as all immigrants living in America on Feb. 2, 2018, in West Palm Beach, Fla. (Photo by Joe Raedle/Getty Images)
By Cameron Easley

With the vast majority of voters backing deportation protections for undocumented immigrants who were brought to the country as children, often with their parents, it may be difficult to understand why Republican leaders are so loath to move on legislation about the issue.

After all, a May Morning Consult/Politico survey found 82 percent of registered voters backed allowing so-called “Dreamers” to remain in the country, of which 63 percent supported providing a path for them to eventually become U.S. citizens. Among Republicans, 73 percent support deportation protections, and 48 percent support a path to citizenship for Dreamers. The survey was conducted May 23-29 among 1,995 registered voters and has a margin of error of plus or minus 2 percentage points.

But another datapoint explains why GOP leaders have been averse to take action, even after President Donald Trump announced in September that he was canceling the Obama administration’s Deferred Action for Childhood Arrivals program, which had provided deportation protections for roughly 800,000 Dreamers.

That’s because support does not equal prioritization.

Only 18 percent of Republican voters say passing a bill that protects Dreamers from deportation should be a top priority for Congress, according to a June 7-10 Morning Consult/Politico survey of 1,994 registered voters. And a plurality of 28 percent say it shouldn’t be done, making it the most divisive policy topic, along with gun control, for GOP voters sampled in the poll, which has a margin of error of plus or minus 2 percentage points. 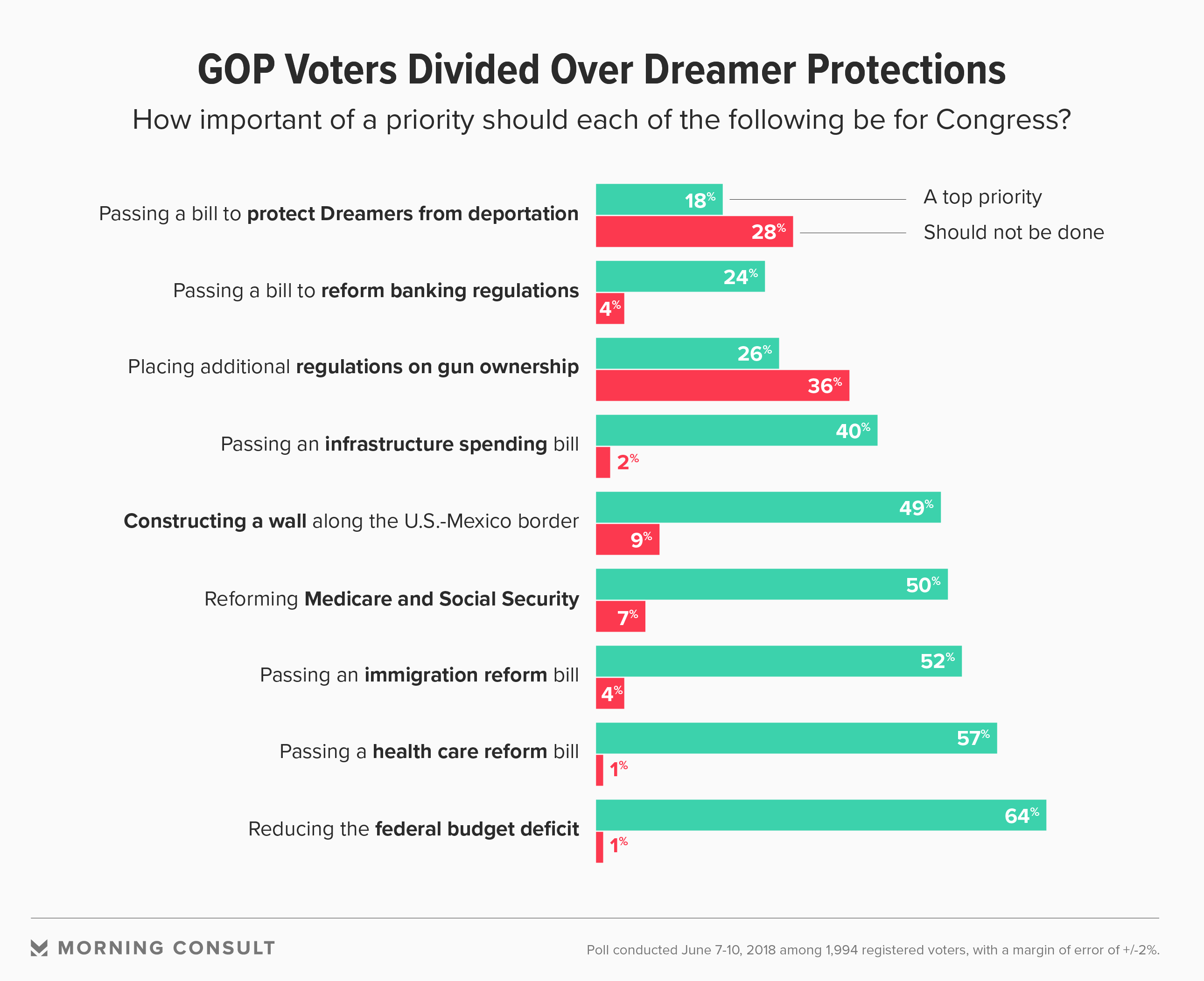 “The majority of the Republican Conference, just like the majority of Republican primary voters, has no urgency on moving on anything other than border security,” Doug Heye, a former Republican National Committee spokesman who later served as a top aide to former House Majority Leader Eric Cantor (R-Va.), said last week in a phone interview. Heye now offers political commentary for CNN and The Wall Street Journal and does consulting work for private companies.

Deadlines tend to dictate congressional activity, and a federal judge’s April ruling putting the Trump administration’s cancellation of the DACA program on hold relieved some of the political pressure on GOP leaders.

But a number of moderate House Republicans facing tough re-election races in 2018 have sought to force the issue to the floor via a discharge petition, a legislative tool that enables rank-and-file members to circumvent leadership’s control of the schedule.

Those GOP members, led by Florida Rep. Carlos Curbelo and California Rep. Jeff Denham, had threatened to collect enough signatures to trigger a process that would have allowed votes on four competing immigration proposals that run the ideological gamut, including Democrats’ latest iteration of the Dream Act, which would provide deportation protections and a pathway to citizenship for roughly 1.8 million Dreamers.

In a May 16 caucus meeting, House Majority Leader Kevin McCarthy (R-Calif.) reportedly warned his colleagues that passing legislation of that kind would infuriate the base, depress Republican turnout and potentially cost the GOP its majority.

“If you want to depress intensity, this is the number-one way to do it,” he said, according to Politico. McCarthy’s office did not respond to a request for comment.

Geoffrey Skelley, an analyst at the University of Virginia’s Center for Politics, agreed that allowing a vote on the Dream Act could prove disastrous for Republicans in November.

“Republican leaders know that Democrats and Democratic-leaning voters are going to show up regardless of what happens in this environment because of their distaste for President Trump,“ he wrote in a June 15 email. “One way to potentially upset the base would be to pass immigration reform that could be labeled as ‘amnesty,’ which as your polling suggests might upset a substantial portion of Republicans.”

GOP leaders were ultimately able to head off the discharge petition through negotiations last week, and the House is set to vote in the coming days on two bills to handle Dreamers, both of which have the president’s support and fulfill his demands: billions of dollars in funding for construction of a border wall at the U.S.-Mexico border and changes to the legal immigration system.

But it’s unclear if either of those proposals has the votes to pass the House, and prospects are even murkier in the Senate.

“By all reports, the House ‘moderate’ immigration bill is hardly moderate at all. It would cut legal immigration dramatically and punish #Dreamers,” Senate Minority Leader Chuck Schumer (D-N.Y.) said on Twitter on Monday morning. “It’s hard to believe that so-called House Republican moderates could vote for such a party line bill that is doomed to fail.”