Majorities of U.S. adults in poll say phone addiction is a problem among children and grownups

At its annual developers conference, Apple Inc. unveiled tools aimed at curbing iPhone usage after pressure from some of its top investors earlier this year to address smartphone addiction. The company is following in the footsteps of other Silicon Valley tech firms that are making similar efforts to reduce time spent on phones.

Yet, while a majority of consumers say smartphone addiction is an issue in the United States, most adults are skeptical that the tools being used to combat it will be effective in decreasing usage and think it’s up to consumers to regulate themselves, a new Morning Consult poll shows. 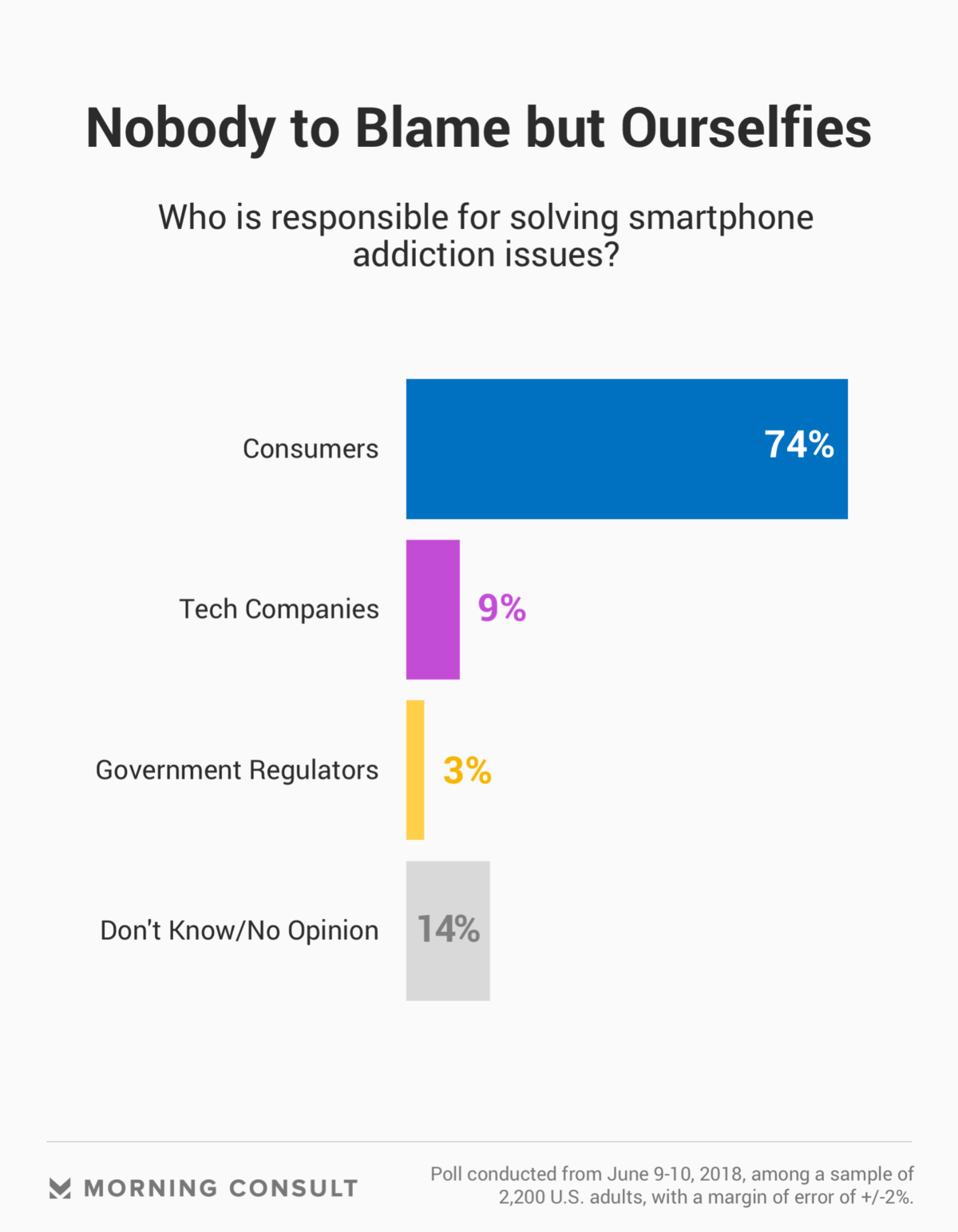 Eighty-one percent of adults said smartphone addiction is a problem among adults, and 90 percent see it as an issue among children, according to the Morning Consult poll conducted June 9-10 among a national sample of 2,200 U.S. adults. However, a plurality (43 percent) blame the problem on individual consumers, and 74 percent believe it’s the responsibility of the consumer to solve. The poll’s margin of error was plus or minus 2 percentage points.

Consumers saying the issue is one of personal responsibility, though, isn’t a surprise to David Greenfield, assistant clinical professor of psychiatry at the University of Connecticut School of Medicine and founder of The Center for Internet and Technology Addiction.

“There’s a tendency that when people have an addiction to drugs, alcohol or behavior, they’re responsible for it,” Greenfield said in a phone interview Thursday. But the truth, Greenfield noted, is that “all addictions are neurobehavioral and neurobiological,” requiring more than willpower to overcome.

Related: Almost 3 in 4 Americans Say Trump Uses Twitter Too Much

At the 2018 Apple Worldwide Developers Conference on June 4, the tech company introduced a plan to roll out features to help iPhone users rein in their usage following criticism by investors from Jana Partners LLC and the California State Teachers’ Retirement System that the device is overly addictive. These anti-addiction tools include a weekly activity report that will alert users of how often they’ve used their phones in the past week and how they’ve spent their time, as well as an extended “Do Not Disturb” feature that will halt notifications at bedtime.

Apple joins Alphabet Inc.’s Google in taking measures to reduce smartphone usage. In May, Google announced that the next Android release is set to include an app dashboard that will summarize a user’s activity, an app timer that will limit how long a user can use a specific application, a “Do Not Disturb” mode to mute notifications and a “wind down” feature that will filter out blue light and transition the screen into grayscale around bedtime to make apps less appealing.

Representatives from Google and Apple did not respond to requests for comment.

One expert likens Apple’s and Google’s smartphone addiction tools to the warning labels on cigarette packages or addiction hotlines provided by gambling groups.

“The government or some nonprofit could launch a campaign like they did with cigarettes or with drugs,” said Larry Rosen, professor emeritus and past chairman of the psychology department at California State University, Dominguez Hills, in a phone interview Friday. “I think people sort of have a sense that using their phone is causing them problems at night, but I don’t think they have a clear idea as to why.”

Rosen said he has doubts that the new tools will be effective, based on research he’s conducted. But young adults in the United States are a bit more optimistic. In the Morning Consult survey, 52 percent of those ages 18-29 said they believe the new features will help curb smartphone use – the largest support from any age group.

“I think they’re lying, but I think they honestly believe that’s the truth,” Rosen said regarding the young adult numbers. “This is too great a device. At some level, I blame Steve Jobs for creating a device that’s so easy to use that a 1-year-old or 2-year-old can use.” 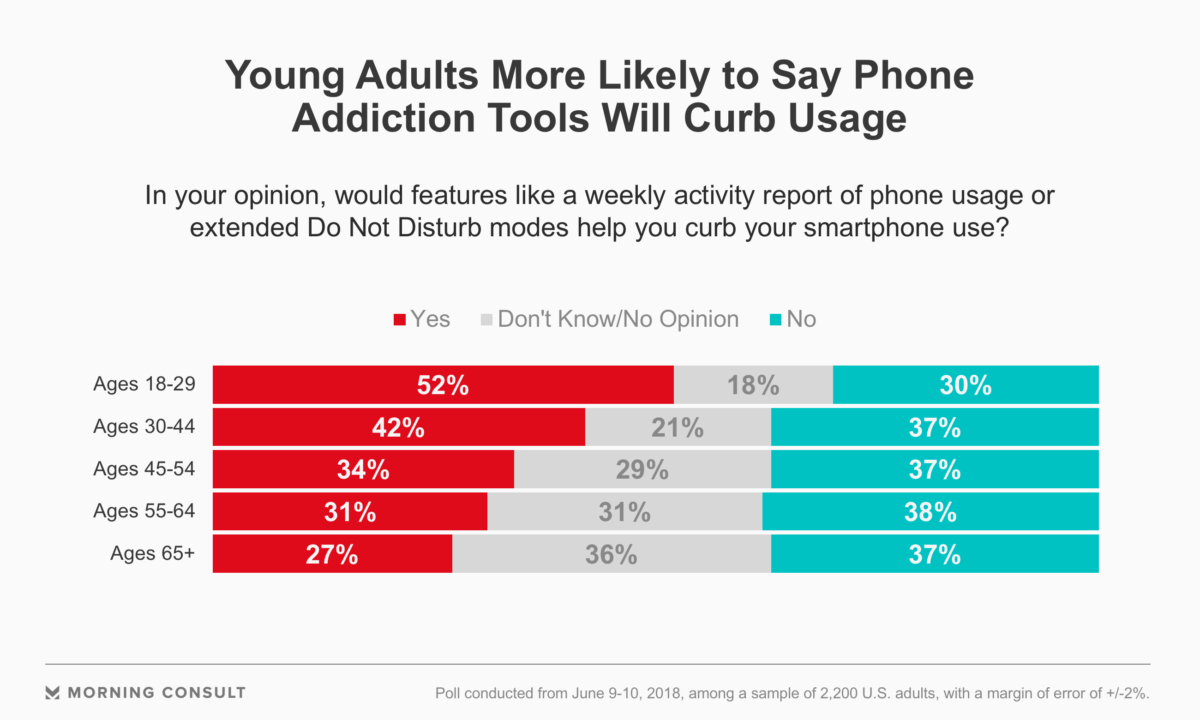 In many regards, the crux of the issue is how people generally view addiction, said Saul Rosenthal, a Boston area-based licensed psychologist who specializes in internet addiction, in a phone interview Monday.

On Monday, the World Health Organization added “gaming disorder” to a draft of the organization’s International Classification of Diseases, the first step for the organization in recognizing health ramifications of spending too much time playing video games. However, no such classification currently exists for smartphone addiction, and Rosenthal said plenty of debate surrounds the conversation of whether to classify excessive smartphone usage as an addiction.

Rosenthal approaches treatment for tech or phone addiction much like he would provide treatment for an eating disorder: It’s more about realigning a patient’s relationship with technology, since it’s difficult to live without it in the 21st century.